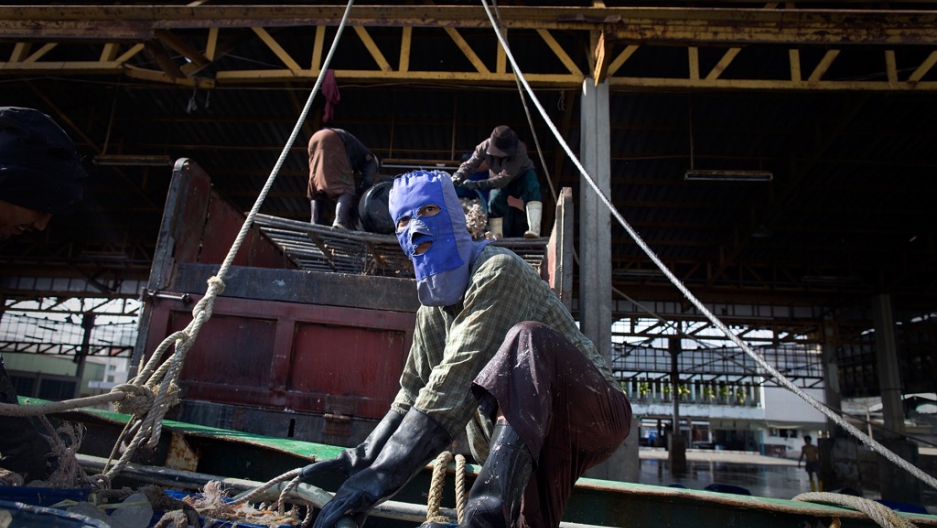 Cambodian and Burmese migrants unload fish off a boat February 25, 2010 in Mahachai,Thailand. Migrant workers, mostly Burmese, are running into more difficult times as many face deportation as an approaching deadline set by the Thai government nears forcing foreign workers to go through a nationality verification process.
Credit: Paula Bronstein
Share

WALTHAM, Massachusetts — Modern-day slaves are working on some of the commercial fishing boats in New Zealand’s waters. And the fish they catch are being sold to a number of seafood exporters which reach retailers and restaurants worldwide, including in the United States.

These are the findings of research published by Bloomberg Businessweek that recently took New Zealand by storm. The investigation revealed shocking news that threatened the “100 percent pure” tagline that promotes New Zealand’s much-lauded environmental efforts to keep waters healthy and fish stocks sustainable.

During the six-month, three-continent investigation, dozens of fishermen told American journalist E. Benjamin Skinner haunting stories about abusive treatment. On at least 10 vessels fishing in New Zealand’s waters, Indonesian recruits reported that they had not been paid for their work, that they lived in squalid conditions, and encountered intimidation, violence or sexual abuse.

Their recruiters had rushed them to sign contracts holding them to $3,500 bonds — an amount in some cases exceeding their net worth — if they ended their two-year contract on the vessel early for any reason not approved by the vessel operators.

I led a research team at the Schuster Institute for Investigative Journalism at Brandeis University that helped Skinner trace where the fishermen’s catch was sold. This was tough in the highly secretive global fishing industry, and required meticulous mining of company documents and shipping records.

Along with Brandeis students, I analyzed the information found in them, and Skinner and I talked with dozens of seafood company representatives — many of whom would only speak to us under condition of anonymity. We were then able to link American consumers to the fish caught by slave labor. While the squid on the menu at PF Chang’s and sold at Sam’s Club might not have been triple-washed in chemicals — a concern of consumers these days — our investigation showed that there are human costs incurred to bring this seafood to our plates.

More from GlobalPost: What do Nigerians think of Ngozi Okonjo-Iweala?

Our investigation apparently shocked some American importers implicated in our story. From an environmental standpoint, New Zealand’s fisheries are known as some of the most effectively managed. Scientists, government, and industry representatives there have developed a model quota system to ensure that no species is overfished. From the air, New Zealand keeps a watchful eye on unregulated commercial fishing and government ecological observers are supposed to be present on every boat. In contrast, labor auditors visit each vessel only every two or three years.

In the $85 billion global fishing industry, awareness of the need to sustain biological resources is a positive step, but human rights should not be relegated to a second-tier issue.

Some of New Zealand’s news organizations, fishing industry and government officials took seriously the human rights allegations our story revealed. This investigation and responses in the United States and New Zealand provide valuable lessons for other countries and industries going forward.

After Skinner’s story appeared, the New Zealand Department of Labor and Ministry of Fisheries released its own report about labor abuses in the fishing industry, the result of an investigation it had been conducting. It proposed solid recommendations to more tightly monitor the recruitment and employment practices for foreign fishermen, including requiring greater accountability on the part of New Zealand fishing companies (rather than allowing such responsibility to remain devolved to the foreign owners of the vessels). So far, New Zealand’s Parliament has approved 6 of the 15 recommendations.

In the United States, California’s Transparency in Supply Chains Act, in effect since the start of 2012, requires manufacturers and retailers (including some of the grocery stores selling New Zealand fish) to report what, if any, efforts they are making to monitor the labor practices of their suppliers. Federal action of this sort would mean that companies throughout the country would be held publicly accountable for finding and making available to consumers information about their suppliers.

When Skinner’s story identified companies by name, New Zealand’s second-largest seafood company, Sanford Limited, a $383 million business, came under intense scrutiny. On March 5, Sanford announced that it was redrafting its observer contracts, initiating a review of its crewing (recruitment) agents, and improving its payment processes to pay the crew directly.

As a result of this investigation, Safeway and Walmart and the distributors High Liner Foods and Mazzetta announced investigations into their seafood supply chains. But some companies have been noticeably silent — PF Chang’s, for example, has made no public comment on its squid, which was likely sourced from one of the ships using coerced labor, and ultimately supplied to all of its 200-plus restaurants across the nation. As public awareness of slave labor increases, more companies may face pressure to be accountable for what they buy and serve.

Truly autonomous labor audits increase accountability — for both the suppliers and the importers of seafood, and should be mandatory. Independent, third-party observers would need to be on vessels as well as in factories.

Consumer responses and next steps:

Consumers can — and should — expect to receive answers when they ask where their food comes from. Given how difficult it can be to trace global supply chains, some restaurants and retailers might not have this information. However, unwillingness to make the effort to find out should not be tolerated. Ignorance should be no excuse for companies to abdicate their responsibility to prevent labor exploitation at any point in their supply chains.

What Skinner found out about New Zealand’s fishing industry is just a part of a bigger story about modern-day slavery. Supply-chain reporting — tracking and documenting slave-working conditions to the production, distribution and sale of items that Americans use — might be complex work. But it is also essential if companies are to be held accountable. Armed with this knowledge, consumers can affect human-rights conditions half way around the globe.

Sophie Elsner is a researcher at the Schuster Institute for Investigative Journalism at Brandeis University.