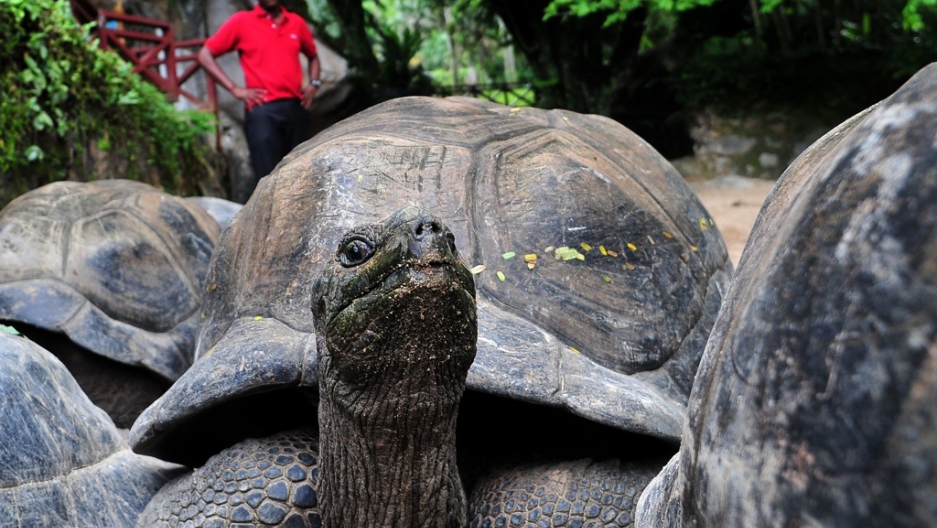 Endangered tortoises in Zimbabwe are being eaten by Chinese expatriate workers. The tortoise shown here is in the Seychelles.
Credit: Alberto Pizzoli
Share

JOHANNESBURG, South Africa – Chinese workers in Zimbabwe are buying up the local wildlife for dinner, feasting on endangered tortoises, pythons, leopards — and even village dogs.

Viewed as prestigious dishes, they would be expensive to serve at banquets back in China. But in Zimbabwe they are relatively cheap. Worse yet, in this cash-strapped country there’s a lack of resources to thwart the appetite for endangered game, conservation groups say.

China is investing significantly in mining, agriculture and construction, and its companies bring along thousands of workers.

Where there are Chinese in Africa, illegal trade in rare animals inevitably increases, according to experts. In Kenya, elephant poaching rose sharply along roads built by Chinese construction crews, and markets in Ethiopia cater to the Chinese demand for ivory chopsticks and other illicit souvenirs.

One recent case in Zimbabwe involved the gruesome discovery of meat and skeletal remains of 40 tortoises, during a raid on Chinese workers' homes in Masvingo province. The endangered Bell’s Hinged tortoises had been dropped into boiling water while still alive in order to separate the meat from the shell, police and animal welfare officials said.

Four Chinese workers were fined $300 each and deported over the killing of endangered tortoises “for personal consumption.” In some parts of China, tortoises are used to make a very expensive soup.

“Our wildlife remains a legacy for future generations of Zimbabweans and we should jealously guard their future wellbeing,” the Zimbabwe National Society for the Prevention of Cruelty to Animals (ZNSPCA) said at the time.

The ZNSPCA plans to meet with the Chinese embassy about the pillaging of animals for food, according to Ed Lanca, the group's national chairman.

“It’s an ongoing trend. If it’s not tortoises, it’s dogs, if it’s not dogs, it’s pythons,” he said. “We’ve even been told that leopard is also in demand.”

Chinese “are encouraging local communities to procure the meat for them,” Lanca added.

There have been reports of Chinese workers stealing baby tortoises from nature conservancies in Zimbabwe, leading at least one to ramp up security.

China's embassy in Zimbabwe wouldn't comment on the accusations, but was aware of the tortoise case.

"We are doing the research to see if this is true or not," a spokesman said.

Chinese workers "respect the culture here," and "the Chinese people are doing a lot of good things," including helping Zimbabwe's economy, the embassy spokesman added.

There’s a saying in China that people from the country’s south are renowned for eating everything with legs except tables, and everything that flies except airplanes.

But it’s not just rare animals that are being targeted for the dinner plate. Chinese nationals are also said to be buying dogs from villagers.

“Some are strays, but they could well be people’s pets,” Lanca said.

Two years ago, Chinese engineers installing transmitters in Matabeleland South were accused of stealing local dogs to kill and eat. Several Chinese nationals were arrested after being found brutally slaughtering dogs at their camp, but were released with only a police warning.

The problem seems to be continuing: Zimbabwe’s Financial Gazette reported last month on allegations that dogs and cats are being served at upmarket Chinese restaurants in Harare.

Last year, China sent a high-level delegation to Zimbabwe to hold seminars encouraging Chinese expatriates to respect the local culture, after reports of poor treatment and underpayment of workers caused resentment and anger.

Lanca said the ZNSPCA doesn’t have the money or human resources to address the new problems caused by Chinese workers. The organization, financed entirely by donors, is already tasked with looking after the welfare of all Zimbabwe’s animals, from pet hamsters to giraffes and everything in between.

“We’re terribly, terribly underfunded,” Lanca said, adding: “If we had enough vehicles and manpower, we could take tackle this.”