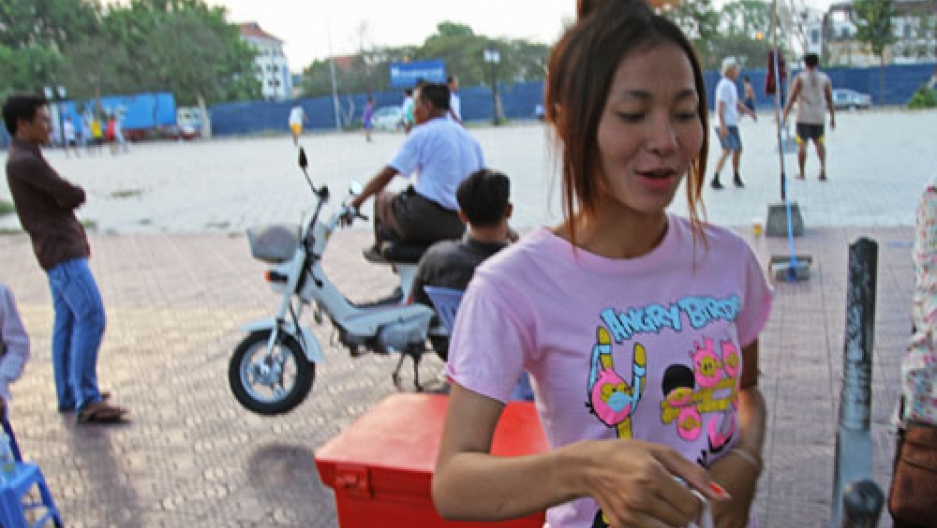 But this week, while on assignment in a remote village, I couldn't help but notice all the cartoon beaks pointing at me from dozens of Cambodians' T-shirts, caps and jackets.

It seemed like every tenth guy or girl was adorned in Angry Birds fashion. Even in this dirt-road farming village, where I'd traveled to interview a human trafficking victim, a local vendor had stitched a felt, yellow Angry Bird to her cutesy blouses to up their selling price.

In the capital, Phnom Penh, the Angry Birds swarm with Hitchcockian intensity: on teenagers' trucker caps, grade schoolers' backpacks and, for the ladies, on pastel-hued flip-flops.

Cambodia's Angry Birds obsession is powerful. But what's driving it?

The Angry Birds are hardly the first bits of Western ephemera to captivate distant places. In Cambodia at least, Mickey Mouse is still enjoying his run as evidenced by this primary school wall art.

So is either Heckel (or Jeckel?), who appears to have comandeered a Khmer war elephant.

But the Cambodian fixation with Angry Birds is doubly interesting because so few Cambodians will ever get to launch their pointy beaks at a neon-green pig.

Angry Birds is, after all, a video game that's synonymous with the iPhone or iPad, considered extreme luxuries in Cambodia.

According to the World Bank, more than half of all Cambodians survive on less than $2 per day. And according to a Phnom Penh electronics dealer, new-model iPads can sell for more than $700. A Cambodian villager might as well pine for a Ferrari.

As of this year, Angry Birds is available on Facebook. But with such a slender percentage of Cambodians able to go online, it's safe to say that most Cambodians sporting Angry Birds gear will never play the Angry Birds game. I suspect most are unaware that Angry Birds is, in fact, a video game.

This glut of knock-off Angry Birds gear, obtainable by city kids and peasants alike, sells for cheap. Cambodia is home to a sizeable garment industry and perhaps the shirts are produced locally with gear not slated for export finding its way into local shops.

It stands to reason that Rovio, the Finnish software company that created Angry Birds, isn't seeing a dime from this.

But Rovio's software designers can at least take satisfaction in knowing that, for the moment, they are Cambodia's most influential fashionistas.