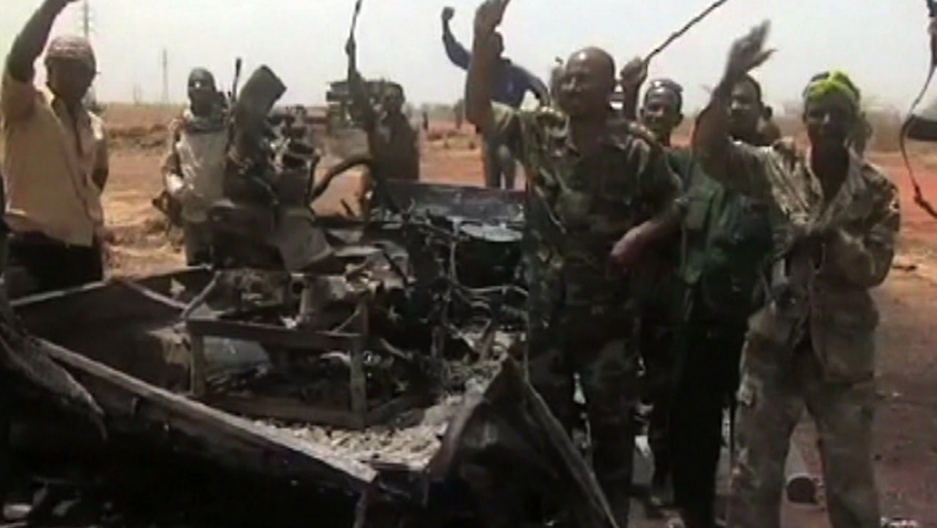 An image grab taken from footage obtained by AFP shows Sudanese troops celebrating next to a burned military vehicle on March 29, 2012, one day after recapturing Sudan's southern oil center of Heglig following fighting with South Sudanese forces along the border. Southern troops have once again seized the Heglig oilfields, parts of which are claimed by both countries.
Credit: -
Share

The South Sudan army seized Heglig Tuesday, claiming that its forces were acting in self-defence because Sudan was using Heglig as a base for attacks on South Sudan.

Sudan, however, charges that Heglig is its territory and that it would use "all legitimate means" to win it back, reported the BBC. Sudan announced mobilization of the Sudan army.

The African Union said it is "deeply alarmed" and called on both sides to exercise the "utmost restraint," reported Reuters. The AU called on South Sudan to withdraw its troops from Heglig.

Sudan cancelled talks with South Sudan that were sponsored by the African Union to resolve differences. Sudan said it will withdraw its negotiating team from Addis Ababa immediately, reported Reuters.

In South Sudan, the parliament speaker urged legislators to mobilize people to defend the nation in case an all-out-war broke out between the two nations.

"Khartoum might be meaning a real war ... If you don't defend yourself you will be finished, so you should go and mobilize the people on [the] ground to be ready," James Wani Igga, the speaker, told parliament, according to Al Jazeera.

"We have to be vigilant to all the points as they are attacking us in all corners," said Igga, a deputy chairman of the South's ruling party.

There is a lot of blustering on both sides about national sovereignty but the center of the dispute is Heglig's oilfield, which is estimated to produce about 57,000 barrels a day, according to Reuters. That is equal to half of Sudan's daily oil production, so it is easy to see why President Omar al-Bashir's government does not want to lose the Heglig.

South Sudan gained independence from Khartoum last July after 20 years of civil war but there have been tense relations between the two countries ever since. Both countries claim the border oilfields.

South Sudan depends on oil sales for 98 percent of its revenue, but in January it shut down all of its oil production as a result of a bitter disagreement over fees that Sudan demands for the oil to be pumped through a pipeline across Sudanese territory to Port Sudan on the Red Sea. South Sudan has plans to build a new pipeline to pump its oil across Kenya to the port of Lamu, but that is years from completion.

A summit between the South Sudan President Salva Kiir and Sudan President Omar al-Bashir was planned in South Sudan's capital, Juba, at the beginning of April, but it was postponed indefinitely because of the recent fighting. African Union mediator Thabo Mbeki held individual talks late last week with Kiir and Bashir, amid international fears of a return to full-blown conflict.

A concentration of arms and heavy weapons increases the threat of war. Both Sudan and South Sudan have considerable arms stockpiles. In addition both are providing arms to rebels and militia groups in each other's territories, according to a new report, "Reaching for the Gun: Arms Flows and Holdings in South Sudan" by the international weapons monitoring group, the Small Arms Survey.

Both sides have often made and denied such claims of support.

No one should be surprised that there are troubles in Heglig now.