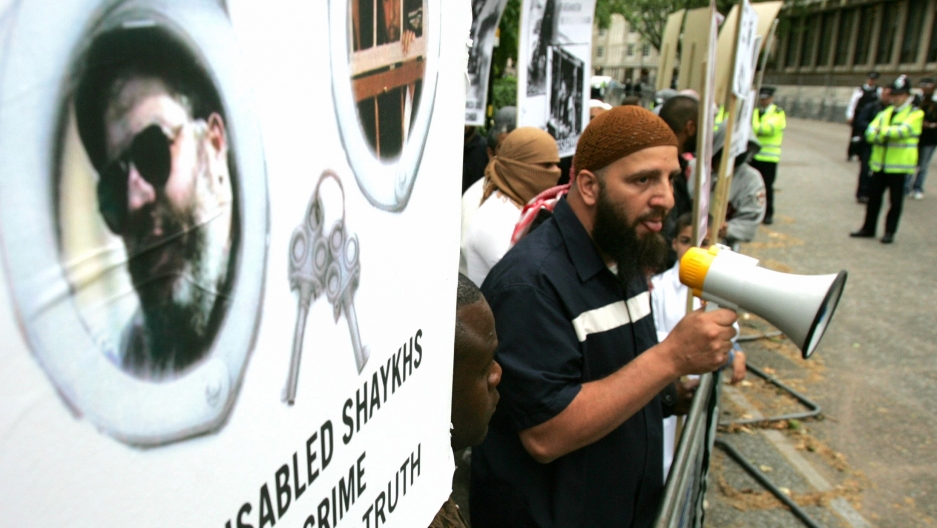 Protesters hold placards showing pictures of Muslim cleric Abu Hamza al-Masri at a demonstration outside the U.S. Embassy in London, June 4, 2004. Supporters of Abu Hamza al-Masri gathered at the embassy to protest against his arrest on U.S. terror charge

Five men suspected of terror-related offenses are one step closer to being sent from Britain to the United States.

Europe’s top human rights court ruled on Tuesday that the extraditions can go ahead.

The five suspects include Abu Hamza al-Masri, a radical Islamist cleric who’s blind in one eye and has a hook for a hand. Hamza, who was known for preaching outside Finsbury Park mosque in London, once praised the Sept. 11 terrorist attacks.

Also known as Mustafa Kamal Mustafa, Hamza was sentenced to seven years in a British prison for inciting murder and racial hatred. While he was still in prison, the U.S. issued an extradition request.

One man who served as an informant against Hamza was delighted to hear of the European court’s ruling today.

“For me he was already a terrorist-in-chief because he was the spiritual leader of the Algerian group, the JAA. He was raising money for them. He was recruiting people here in London. So when I used to see him, he’d speak about killing the unbelievers,” the informant said. “He used to call America – the United Snake of America.”

U.S. authorities want Abu Hamza on 11 charges, including planning for a terrorist training camp in Oregon and plotting to provide material support to terrorists.

Hamza and the other defendants argued that long prison sentences that they might serve in solitary confinement in American prisons would violate their human rights. Claire Ovey, a lawyer speaking for the European Court, said the judges disagreed.

“The Court has held that if these applicants are convicted and are sentenced to all-life sentences without possibility of parole in the U.S., that will mean that they have basically been convicted of very serious offenses, and that these sentences will not be grossly disproportionate, and will not therefore amount to inhuman and degrading treatment,” Ovey said.

The ruling comes as a bitter disappointment to the family of another defendant, Babar Ahmad. He’s accused of creating websites that raised money, recruited fighters and provided equipment for terrorists. Ahmad has been held without trial for eight years.

His father, Ashfaq, said his son has been a victim of abuse of process.

“Babar is a British citizen accused of a crime said to have been committed in the UK,” his father said, “and all the evidence against him was gathered in this country. Nevertheless, British justice appears to have been subcontracted to the U.S.”

The case has been seen as a judgment, in effect, on the U.S. prison system.

“This is an entirely sensible decision. The United States is a friendly country, it has a fair justice system,” said Lord Alex Carlile, the terrorism law watchdog under Tony Blair’s government. “I don’t like some aspects of its penal system, but it’s a sovereign and lawful system. It would have been extraordinary if the European Court of Human Rights had discriminated against the American justice system. These men are accused of very serious offenses in the United States, and it’s right that they should be tried in the United States.”

The decision is not just a win for the U.S. Justice Department. It’s also an important victory for the British government, which has been facing increasing criticism for its enforcement of laws on deportation and extradition, particularly to the United States.

The court’s procedures call for a three-month waiting period before the ruling is final. The men can still appeal to the Grand Chamber of the European Court of Justice, which if it agrees to hear the case could tie the matter up the case for many more months to come.