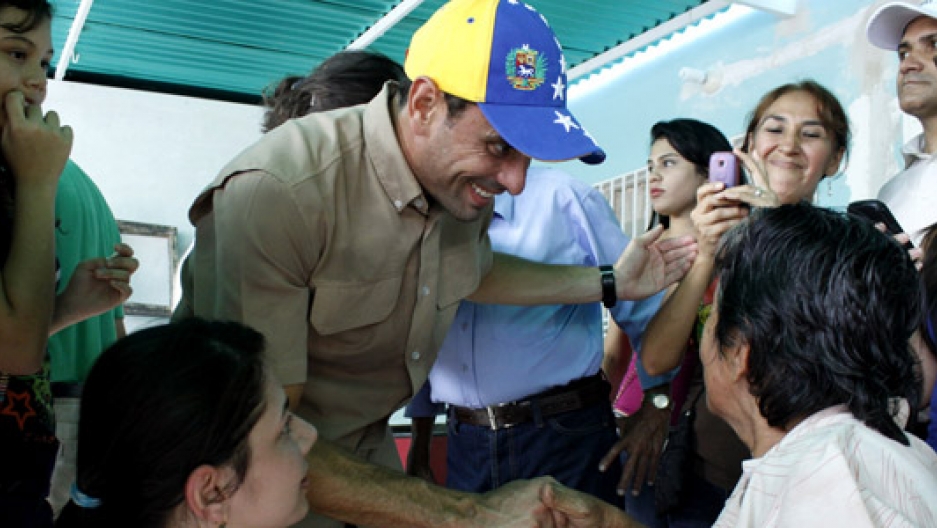 Share
Venezuela's socialist president, Hugo Chavez, could face his first serious test at the ballot box. Not only is Chavez is being treated in Cuba for cancer, but after years of infighting Venezuela's opposition has united behind a single candidate: Henrique Capriles. a 39-year-old lawyer with a track record for winning tough elections. In the western town of El Vigia, Capriles goes door-to-door to drum up support. He bubbles with optimism even though we're in a traditionally pro-Chavez neighborhood. Capriles assures me that Chavez's Bolivarian revolution is running out of steam because of high crime and unemployment. "After 13 years, the only thing the government offers is promises. There are no results," Capriles said. "Promises work when you are new but not when you have spent many years in power." Capriles is confident because he's never lost an election. After winning a legislative seat in 1998, Capriles was appointed president of the National Congress when he was just 27. He later served as mayor of a Caracas suburb and was elected governor of Miranda state in 2008. Capriles won the opposition primary in February. Now, he said, he's now ready to take on Chavez, who draws support mainly from the poor and working class. "Many outsiders think that the only person who has support among the poor is Chavez, which is absolutely false. If that were the case, I never would have been elected governor and I wouldn't be a viable presidential candidate." Capriles calls himself a centrist in the mold of Brazil's former president, Luiz Inacio Lula da Silva. Capriles promises to maintain Chavez's social welfare programs while ditching the president's authoritarian style. Gloria Contreras, who lives in El Vigia, used to support Chavez. But she said she's tired of the power outages and food shortages. "We are angry. We no longer want Chavez as our president. I want someone else and that's why I'm voting for Capriles. As Capriles stumps for votes, Chavez has been receiving radiation treatment in Cuba for cancer in the pelvic region. The illness has limited the 57-year-old president to just a few personal appearances. If his condition worsens, it could prevent him from running in the election, according to Miguel Otero, editor of the Caracas daily, El Nacional. "People see Chavez as a super-hero," Otero said. "If he's sick, they don't see him like that. Chavez is now an old man; a sick old man." Still, Chavez controls the bureaucracy and is pumping huge sums into health, education and housing programs ahead of the voting in October. What's more, his government controls most Venezuelan TV stations, and Chavez has been waging his campaign on television. He regularly takes to the airwaves for hours to savage the opposition. "The great Bolivarian victory next October 7th has already been written," Chavez said in a recent speech, "and you sirs, in the opposition, you will continue to be in the opposition for at least the next 500 years." If Chavez recovers and wins another six-year-term, it would mean two decades in office for him. There are no term limits in Venezuela, so he could stay in power even longer. That's just fine with his most fervent supporters, like Evin Barrera, a taxi driver in El Vigia. "Chavez has given us health, education, and nutrition," Barrera said. "He's done everything for the people. So if we turn our backs on him now, we would be traitors." Recent polls show Chavez in the lead. But Capriles claims he will turn the tide. And if he wins, Capriles pledges to push for a constitutional ban on unlimited presidential terms that have helped Chavez stay in power for so long.