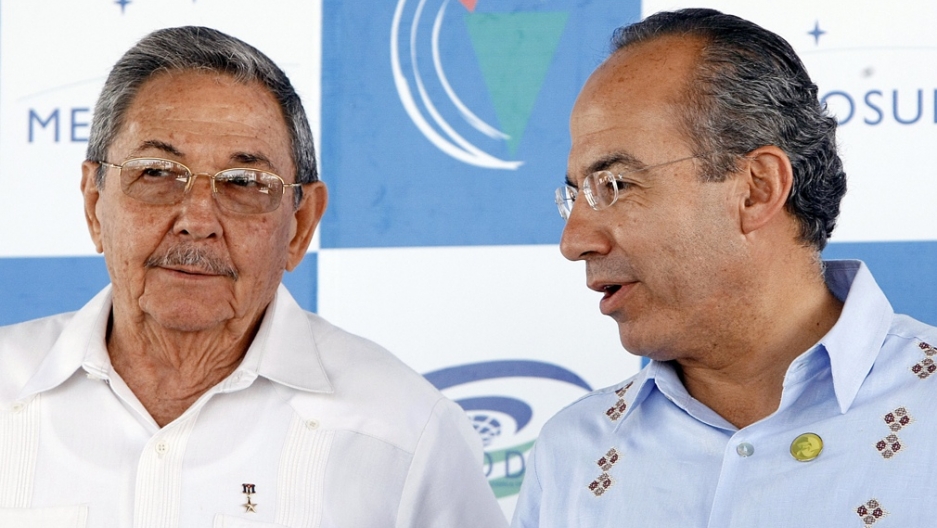 HAVANA, Cuba — When Mexican President Felipe Calderon arrives here Wednesday for his first official visit to Cuba, the trip may do more to highlight the ongoing estrangement between the two countries than it will their historic ties.

Chummy relations with Cuba were once a point of pride among the leaders of Mexico’s Revolutionary Institutional Party (PRI), which ruled the country 71 years. But since Vicente Fox’s election in 2000, links to Havana have been shaky. The right-leaning National Action Party (PAN) governments of Fox and now Calderon have been cool to the Castros.

That’s one reason Calderon’s first visit to the island comes with just eight months left in his six-year term, despite a lengthy list of pending bilateral issues for the two countries, many of which are the product of their close proximity to the United States.

A statement issued by Calderon’s office said the purpose of his trip would be “deepening the dialogue on trade and investment between the two countries.” Mexico also seeks “to continue talks on political matters, migration, the extraction of shared oil resources, trade and commerce, human rights and Latin American and Caribbean integration.”

Most of those issues are obvious topics of mutual concern, but one item sticks out: human rights.

More from Cuba: Where's the warm welcome for a Cuban Five detainee?

Calderon will have to tread carefully on the topic while he’s in Havana. If he makes a strong statement criticizing Cuban restrictions on publishing, speech, internet access or political dissent, he’ll risk a setback to the rest of his agenda.

Cuban government newscasts already highlight the grim headlines of Mexico’s drug war, including incidents of torture and murder by Mexican soldiers and police against civilians. Given the tarnished state of Mexico’s own rights reputation, Cuban authorities will be in no mood to hear a lecture on the subject from Calderon.

After all, not even Pope Benedict XVI uttered the words “human rights” during his visit to Cuba last month.

Calderon may keep the conversation centered on matters more amenable to his hosts, such as better cooperation on drug interdiction, oil drilling in the Gulf of Mexico and boosting Mexican tourism to the island.

The conservative Calderon will also find a more-than-sympathetic ear from Cuban President Raul Castro if he wants to vent about his frustration with the United States.

As the end of his presidency approaches, Calderon has increasingly looked to shift blame for the failures of his US-backed drug war onto America's narcotics consumers and its lax gun laws, which supply Mexican gangsters with billions in illicit profits and easy access to high-powered weapons. Cuba also sees Mexico’s drug violence as a US import.

The young revolutionaries took refuge in Mexico after their release from a Cuban prison in 1955. They spent 18 months in the country, organizing the armed invasion of the island that eventually deposed Cuban dictator Fulgencio Batista.

In the 1960s, Mexico was the only Latin American nation that did not bow to US pressure and cut diplomatic ties to Cuba, maintaining relations with Havana as a sign of its independence from Washington.

But the past decade has been a time of strain between the two neighbors. Tensions peaked in 2004 when both countries temporarily closed their embassies.

Calderon came to office in 2006 intending to mend fences, but a planned 2009 visit was canceled after the H1N1 flu outbreak in Mexico — and Cuba’s decision to suspend flights between the countries over fears of a widening pandemic.

Even today, Cuba’s skepticism toward Calderon — like Fox before him — stems from the perception that Mexico has compromised its foreign-policy independence from the United States, according to Eric Olson, senior associate at the Mexico Institute of the Woodrow Wilson International Center for Scholars in Washington, DC.

And once again, human rights will be the prickliest issue in Calderon’s attempt to improve Mexico-Cuba ties, Olson said in an interview.

“How and when Calderon raises the issue will give us some insight into the extent to which it will become a significant issue in the relationship going forward and the tolerance or intolerance of Havana in dealing with this concern,” he said.

The question, Olson added, “is whether they will find the middle ground that allows Mexico to raise its concerns about human rights without beginning the slow slide into bitter recriminations that seemed to characterize the relationship much of last decade.”

Calderon will visit Haiti after departing Cuba, then continue on to Colombia for the Organization of American States (OAS) April 14-15 Summit of the Americas.

Cuba’s exclusion from the summit — the island is not a member of the OAS — is expected to be a major issue at the event.