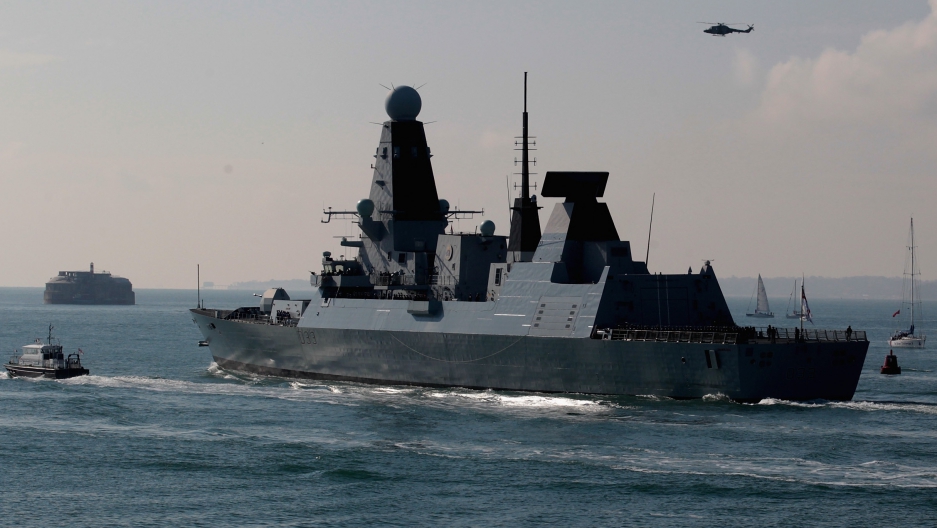 Britain's deployment of the HMS Dauntless, seen leaving Portsmouth for the South Atlantic on April 4, came just two days after the 30th anniversary of the Falkland/Malvinas war, fueling tensions between Argentina and the UK.
Credit: MATT CARDY
Share

We were both 18 in that fall of 1981, when the military dictatorship in our country, Argentina, seemed to last forever. All we knew in our teenage nights was martial law, curfews, censorship, fear and the hushed whispers that people had “disappeared.” On April 2, 1981, we were stripped of all our civilian clothes and identity, and our hippie hair was mercilessly shaved. At Puerto Belgrano, the navy base in the south, chubby, red-faced "Juanca" was my friend. In our few free moments during instruction, we quietly discussed, pitied and laughed at our luck and the military mindset.

One year later, the military dictatorship of Gen. Leopoldo Galtieri took the Falkland Islands — which we Argentines call Malvinas — from the British. I was flown into Puerto Argentino/Port Stanley, spent 69 days in danger, cold, bombings, comradeship and growth. I was almost killed. I could have killed somebody. I survived.

When I came back, a friend told me that Juan Carlos, who was stationed on the General Belgrano, a navy cruiser, had not made it. When a British missile sunk the old vessel, my friend saw Juanca walking along the deck, as if lost or stunned. He did not jump to the few lifeboats that were tossed into the freezing waters of the Atlantic. His name appears, together with the other 648 Argentines, on the Malvinas war monument at Plaza San Martin in Buenos Aires. The other dead were 255 British military men and three islanders.

Even before we came back from the war, another war had started: It was the dialectic combat about the meaning, value and political use of the war and the 150-year-old sovereignty dispute by quarreling factions both in Argentina and Britain.

What lesson was to be learned from the South Atlantic conflict? Why should we remember a strange, short, armed struggle between two of Ronald Reagan’s allies in his brutal, last stretch of the Cold War? The distance of 30 years allows me to look at the changing faces that the past took in each anniversary.

1987 — In Argentina, five years after the war the first democratic president, Raul Alfonsin, ordered a thorough human rights investigation that ended with “comandantes” in jail. The invasion of Malvinas was then considered by most Argentines as another crime of the juntas. In fact, after the human rights case, Argentine top brass were also tried. Galtieri got sentenced for criminal negligence in his conducting of the war. In Britain, Margaret Thatcher was still enjoying the political capital of her Falklands victory, and using it for crushing the unions and smashing the welfare state.

1992 — Five years later, Alfonsin’s successor, Carlos Menem, who started as a fierce nationalist, ended up with the deepest campaign ever to solve the conflict through peaceful means. He was the first to visit the UK, and his foreign minister sent Christmas present to the Falkland Islanders. In both countries, the veterans were a sad reminder that wars never end: They were committing suicide and violent acts against others. The papers started to recall stories of Vietnam veterans. Malvinas was seen not only as another crime of the dictatorship, but a problem to solve — internally and internationally.

2002 — The 21st anniversary caught Argentina in flames. In December 2001, the economy in ruins, an angry mob took the streets in Buenos Aires. Menem’s successor, Fernando de la Rua, first ordered repression and then escaped in a helicopter. Corruption was rampant. The interim government ordered the people’s savings to be kept by the banks (the “corralito”). Day after day, neighbors stood on their balconies, clanging pots and pans and shouting “Let them all go!” In that atmosphere, war remembrance became a look back at an alleged time when the country was united for a cause, unselfishness prevailed and the Nation came first. In Britain, Tony Blair would defend the Falkland Islanders’ right to self-determination when asked, but his radar was pointing in other directions, and the British public seemed to have left the conflict behind.

2007 — The 25th anniversary found Argentina stable and starting to grow prosperous. Nestor Kirchner’s presidency (2003-2007) put human rights and nationalism back on the table. He gave the veterans more benefits and attention than any other government, and their stories (our stories) dominated the anniversary coverage, together with reports of journalists who traveled to the islands and sounded out their ideas and wishes. The war was remembered mainly as a tragedy in contrast with the peace and democracy of the day.

2012 — Why is saber rattling the sound of this 30th anniversary? After Nestor Kirchner’s death in 2010, his widow Cristina Fernandez de Kirchner’s presidency became more aggressive. She chose the independent media as her enemy and as the economy cooled down, inflation rose and corruption charges mounted, she turned more nationalistic. Malvinas was one of her causes from the start. She rallied fellow Latin American presidents to ban ships with the Falklands flag in their ports, and returned to the rhetoric of “true patriotism” as a synonym of support for her. In Britain, Thatcher’s party is back in power. With troubled relations in the EU and retreating from the Middle East, David Cameron sees that some saber rattling can also do him good, reminding people of the “clean” war of 1982 and the glory of his party.

There’s also money involved in both countries’ insistency, for sure. Fishing rights have not made protecting the islands less onerous, but now new oil drilling might start in 2016, and that could mean good business.

We all know that after the end of the Cold War, nationalism, flag-waving, sacred soils and unifying causes help win elections and make people forget the diminishing state services, growing inequalities and corruption. In Orwellian terms, they’re using, changing and twisting the past to serve their present needs.

As for me, when a new anniversary comes, I think of my old friend Juan Carlos Zangani, who died at 19 in a war that should never have happened, a war from which the new leaders seem to have learned nothing.

Roberto Herrscher is director of the Master in Journalism program, University of Barcelona, and author of “The Voyages of the Penelope” about the Malvinas/Falklands war.