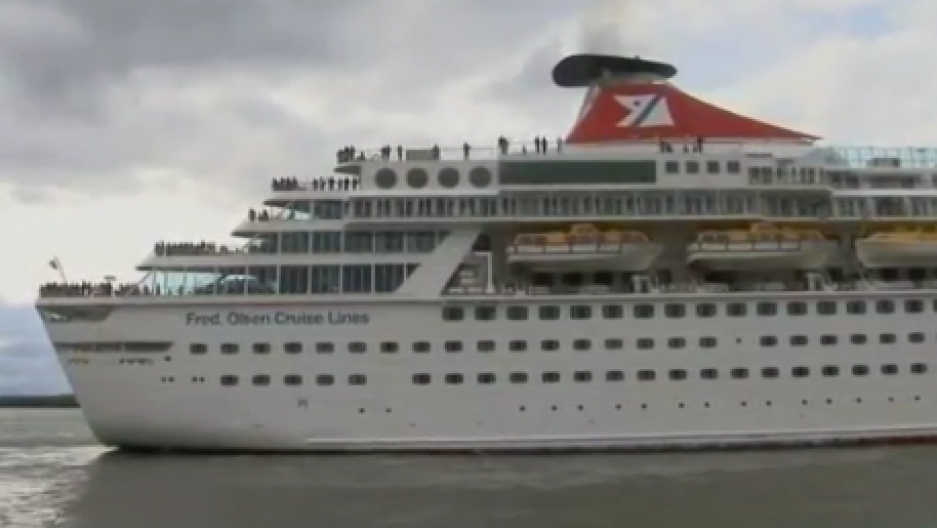 The M.S. Balmoral is sailing from Southampton in the United Kingdom across the Atlantic to Nova Scotia and New York City, retracing the planned route of the RMS Titanic. (Photo from Reuters video.)

A cruise in memory of the 100th anniversary of the sinking of the Titanic is set to depart from the U.K. on Monday — but its departure is being delayed by strong winds.

That's the latest report from BBC News on the cruise of the MS Balmoral, which is set to travel from Southampton to the site of the Titanic's sinking, before heading onto Nova Scotia and ultimately to New York City. The supposedly unsinkable Titanic struck an iceberg April 14, 1912, and sunk a few hours later on April 15 — killing more than 1500 of its nearly 2300 embarked passengers.

The Balmoral memorial cruise will include a menu derived from the earlier cruise as well as historical lectures and presentations.

According to the BBC, passengers come from more than 20 countries and include relatives of survivors, authors, historians and others who are simply enamored with the history of the Titanic.

Susie Miller's grandfather, Thomas Miller, died on the Titanic, which was enough motivation for her to "follow in his wake" she said to the BBC.

"She said although the cruise was meant to be 'paying respects to those lost,' it was also 'celebrating Titanic because there was nothing wrong with Titanic as a ship,' the BBC wrote.

The cruise ship has the same number of passengers as the original Titanic carried — though the crew numbers are different, the Associated Press reported. The cruise will last 12 nights.

Some of the passengers chose to go all out, including wearing period costumes as they boarded the ship and prepared to depart, the AP said.

Graham Free dressed as an Edwardian gentleman, the AP said, and was excited for the journey.

"I have been a fan of the Titanic since I was nine years old and this cruise is the closest you are going to get to it," Free, 37, said to the AP.

The Balmoral is following the same route as the Titanic was set to follow, but had to leave earlier because it's a smaller, slower vessel.

"Cruise organizers have set up a special memorial service on April 14 to start at 11:40 p.m. to mark the moment Titanic hit the iceberg, and later at the exact moment when the ship sank," the AP wrote.

Tickets for the cruise cost from nearly $5,000 to almost $10,000. By comparison, a single ticket on the initial Titanic, when adjusted for inflation, cost from about $300 to $3000 — though the most expensive first class suites would be more than $83,000 in today's money.