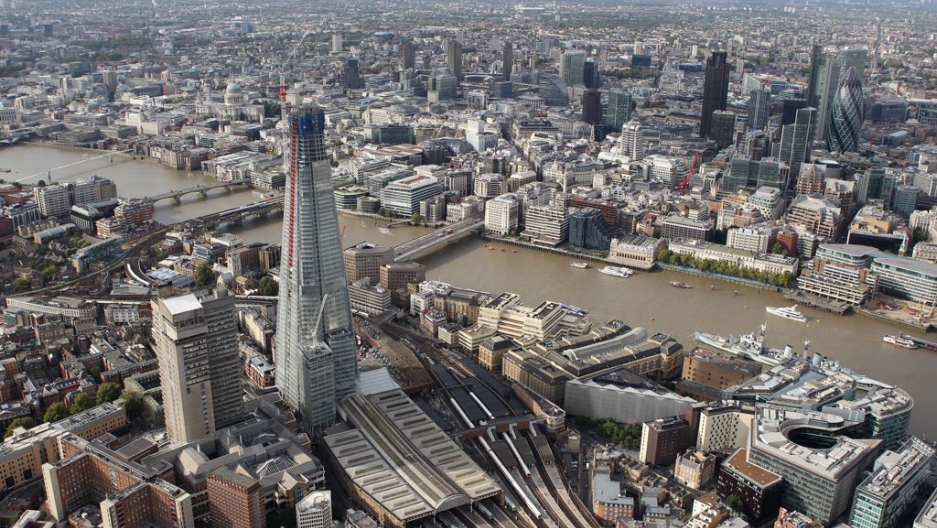 An aerial view of London shows the unfinished Shard skyscraper towering above the rest of the skyline.
Credit: Tom Shaw
Share

LONDON, United Kingdom — An American man claims to have climbed the Shard, western Europe's tallest building and supposedly one of the best guarded sites in London, the UK Press Association reported.

Bradley L. Garrett, originally of Los Angeles and now based in London, posted pictures online apparently showing himself and friends scaling the 1,016 ft skyscraper, which is still under construction. The photos show Garrett dizzingly high above the British capital, seemingly holding on to a builders' crane.

Thirty-one-year-old Garrett, who has a PhD in "urban exploration," says he and others have broken into the site "half a dozen times" since Dec. 2010 and could do so again "tomorrow," the Independent reported.

Writing on his blog, Place Hacking, Garrett describes the ease with which he was able to trespass: the night the pictures were taken, he said, his group accessed the building around 2 a.m. from a walkway near a public railway station. They saw only one security guard, and were able to clamber over scaffolding and up stairwells while the guard watched TV in his hut.

More from GlobalPost: Russian blogger sneaks into rocket plant through hole in fence

A spokesman for the Shard's developer, Sellar Property Group, and the main contractor, Mace, told the Press Association that the original breach took place in the middle of "both ground and structure works." The intrusion was discovered and security immediately tightened, he said, with the £435-million ($690-million) building now guarded continuously by 14 night watchmen, CCTV cameras and a laser alarm system.

The spokesman declined to comment on Garrett's claim that he has broken into the site since.

"You've got two months to get yours before the tower tops out," Garrett advised fellow explorers. "Act before you think."

The Shard will have 87 stories once it is completed in June, according to the BBC. It is already the highest building in the European Union.

In Feb. 2011, a fox was discovered living on the building's 72nd story, where it survived by eating scraps of food left behind by construction workers.