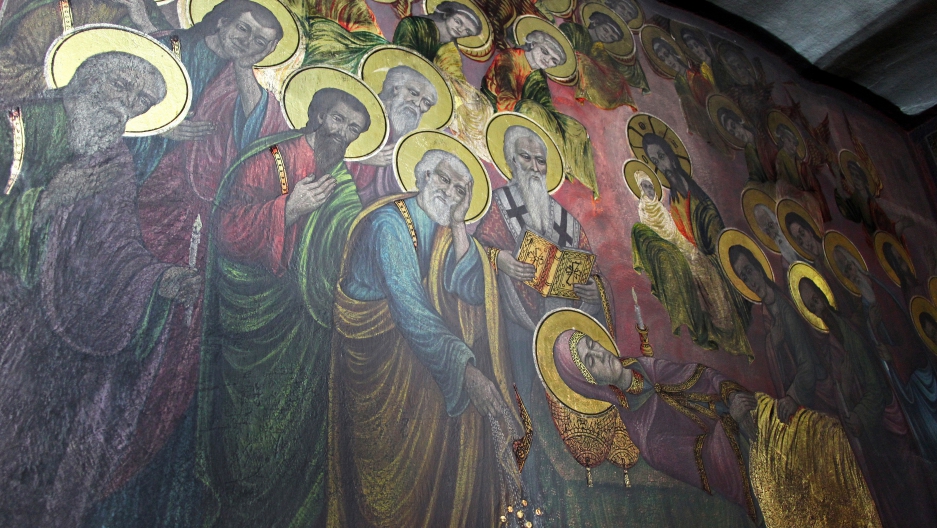 Picture taken on April 9, 2012 shows a fresco at the St. Dimitrija Church in Skopje where frescoes have begun to shine on their own.
Credit: Filip Popovski
Share

Hundreds of faithful arrived at the church of Sveti Dimitrije (St. Dimitrija) Monday to see icons that church officials said began to shine bright without explanation, reported the AFP.

Somewhat coincidentally, reported the Associated Press, the alleged miracle caused the church to be swarmed with believers just a week before Orthodox Easter, which begins next Sunday.

"It is really a miracle, it started Sunday in the central part of the iconostasis (a wall of icons and religious paintings), the golden colour is very visible and the phenomenon continues," Father Dimce Malinov told AFP.

Witnesses have said that the frescoes did appear particularly shiny recently as if they had been restored.

"Since this morning I have observed the phenomenon, half of the icons are already cleaned. First a red colour appears which turns golden (..) You can see the icons clearing up from top to bottom," AFP reported Father Malinov as saying.

The present church was built in the 18th century, yet it is believed that a church has stood on the site since as early as the 13th century.

A Macedonian tourism website states that an Ottoman pasha may have converted the church into his personal harem at some point during its history.

About two-thirds of Macedonia's 2.1 million residents are Orthodox Christian.