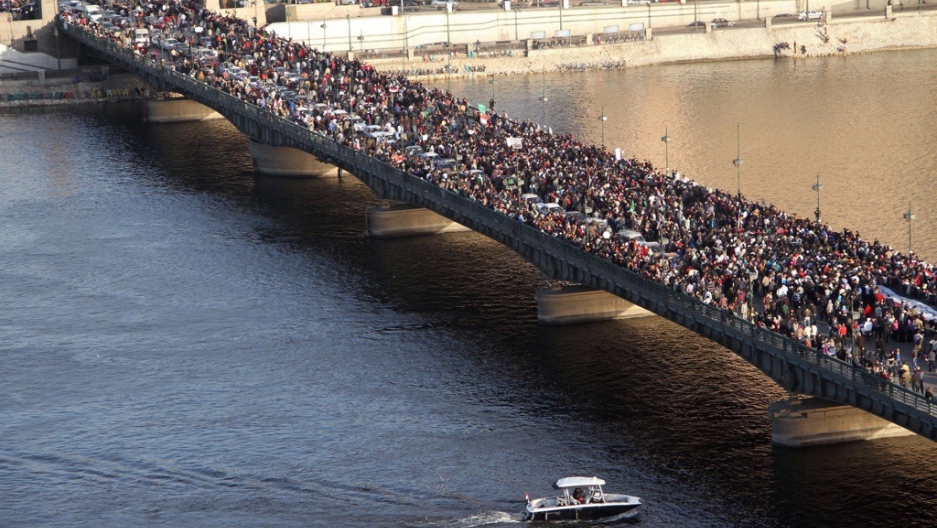 Thousands of Egyptian protesters walk along the Kasr al-Nile bridge as they attend a rally in Cairo on Jan. 27, 2012 to demand democratic change, a year after the uprising that toppled Hosni Mubarak.
Credit: -
Share

CAIRO, Egypt — Pouring onto the streets in an unprecedented uprising last year, Egyptians toppled their dictator of three decades with resonating, populist chants for “bread, freedom and social justice.”

But while more freedom and social justice remain a possibility for Egypt, bread might be harder to come by.

The country’s growing population, and its loosening grip on the Nile, are threatening its water supply, weakening its capacity to irrigate crops and boosting the desert nation’s reliance on food imports from an increasingly volatile global commodities market.

It’s a dangerous situation many fear could lead to renewed political strife.

“People are scared of going hungry. They’ll give up anything but bread,” said 32-year-old Mohamed Maysara Hassan, an employee at one of the many bakeries that sell Egypt’s subsidized bread — a staple — in the heart of Cairo.

If the ailing government was forced to lift its hefty bread subsidy, which keeps one saucer-sized loaf at just $0.008, “There will be another revolution,” Hassan said.

More from GlobalPost: Egypt is losing its grip on the Nile

Egypt, with its long history, is no stranger to food-based unrest.

As far back as the pharaohs, who presided over one of human civilization’s first recorded droughts, food shortages brought on by water scarcity led to a political breakdown, war and depopulation.

More recently, the “bread riots” of 1977 and 2008 — where rising prices or rumors of impending subsidy cuts led to deadly protests in the streets — exposed the dangers Egyptian leaders face when the country’s poor can’t afford food.

“Bread can be the fire-starter or the fire extinguisher of a revolution,” said Noor Ayman Nour, a prominent pro-democracy activist and son of Egyptian presidential candidate.

As much of 80 percent of Egypt’s 80 million people rely on subsidized bread.

“The regime [of Egyptian President Hosni Mubarak] was very successful in keeping prices high enough so that people were on just the brink,” Nour said. “They were just insecure enough to remain subdued but not uncomfortable enough to revolt.”

More from GlobalPost: Could Egypt be out of war by 2025?

But more than a year after Egypt’s revolution, food prices and the cost of basic commodities, like cooking gas, have hit some of their highest levels.

Egypt imports about 60 percent of its total food supply, because just 6 percent of the country is agricultural land — some of which is used to grow luxury cash crops for export. The rest is hyper-arid desert. The Nile is almost the only source of freshwater.

With rising inflation, a large and swelling population, and the threat of increased use of the Nile by upstream neighbors, Egypt's capacity to feed itself is under threat. That makes Egypt's vulnerability to global food shocks more acute than ever.

“After Jan. 25, [the current military rulers] have gone back to the Mubarak tactic of allowing prices to rise,” Nour said. “But blaming those who protest [against them].”

While bread is arguably the most crucial staple of the Egyptian diet, it remains somewhat shielded by the government’s $2.45 billion in annual bread subsidies.

“[M]any of the food items in the consumption basket of Egyptians — fruit, vegetables — have gone up over the years,” she said. If the price of importing food continues to rise, “it would make the cost of living unbearable.”

More from GlobalPost: Video: Ethiopia, at Egypt's expense, claims its fair share of the Nile

Already the price of tomatoes — widely used in Egypt — has risen nearly 150 percent since Mubarak stepped down in February 2011, according to the government-run Central Agency for Mobilization and Statistics.

Food accounts for 44 percent of the Egyptian consumer price index, an economic indicator used to measure household expenditures on things like food, electricity and transportation — and as much as 40 percent of Egyptians live on less than $2 per day, according to the World Bank.

In contrast, food accounted for an average of 3.9 percent of the US urban consumer price index from February 2011 to February 2012, according to the US Bureau of Labor and Statistics.

Sayed Radwan goes to the subsidized bakery in his working class Cairo neighborhood every day to buy cheap bread for his family of four, spending just $1.15 to $1.30 per week. But that still gives him cause for concern.

When the prices of other food items or commodities go up, he said he has to buy less food.

“It is a constant worry,” he said. “We can barely sleep at night. We buy less fresh food. You can’t have a decent life.”

More from GlobalPost: Photos: With Nile only miles away, Ethiopia's farmers struggle to find water

Egypt’s foreign currency reserves, which it uses to purchase imported wheat for its government-supported bakeries, fell to $15 billion in March 2012, down from $35 billion in the month before Mubarak resigned.

If Egypt’s post-uprising economy continues to falter, the issue of food security will be pushed to the forefront, analysts said.

“Food has proven a force for revolutionary change in the past,” wrote Christine Anderson, a former associate professor of international water law at the American University in Cairo, in her book, “Climate Change, Water Governance, Law and State Survival in the Arab World.”

And in Egypt, she wrote, “there are no remedies put in place to prevent a future food crisis.”