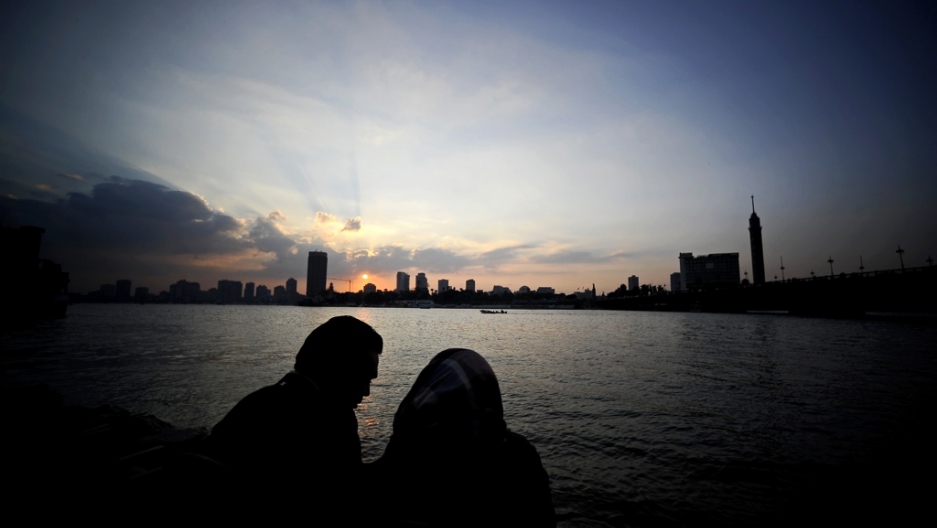 An Egyptian couple enjoys sunset on a bridge overlooking the Nile in Cairo on Dec. 28, 2011.
Credit: Filippo Monteforte
Share

CAIRO, Egypt and MARAWI, Ethiopia — Amid the barren, earth-dug canals and emaciated livestock that stalk the dirt roads of Ethiopia’s northern highlands, Teshale, a 25-year-old farmer, waits idly for the rain to come.

His small, parched field of maize — sometimes wheat, if the weather permits — relies solely on the area’s seasonal rainfall to produce its harvest, which fails to turn even a meager profit.

If Teshale could just harness some water from the mighty Blue Nile River nearby, which eventually cascades north to meet the White Nile in Sudan, flowing onward to Egypt, he might finally be able to halt his endless cycle of poverty, he says.

Until now, Ethiopia has lacked both the technical capacity and the diplomatic support to trap its Blue Nile waters — which give Egypt’s Nile 86 percent of its own flow — for domestic use. A 1959 colonial-era treaty brokered by Great Britain gave Egypt, and to a lesser extent Sudan, unrivaled “historic rights” over nearly all of the Nile River’s resources.

But now all that could be changing as upstream states like Ethiopia and Burundi seize on Egypt’s post-revolution political uncertainty to finally wrest at least some control of the world’s longest river.

More from GlobalPost: Could Egypt be out of water by 2025?

Just 16 days after President Hosni Mubarak stepped down in February 2011, Burundi reneged on its erstwhile promise to Egypt not to sign a new treaty that seeks to adjust water rights in the basin. If ratified by other basin states, the agreement would strip Egypt of its majority share of the river’s water.

The most serious threat, however, comes from Ethiopia, already Egypt’s regional rival. In May 2011, Ethiopia announced plans to build a massive, $4.8 billion hydropower dam — known as the Grand Renaissance Dam — along the stretch of river within its own borders, despite Egypt’s opposition to the project.

“Most of us here are eager to use the Nile. But every farmer expects Egypt to be the enemy,” said Manichey Abey, a 33-year-old Ethiopian farmer.

While hydropower dams — used to generate electricity — in theory eventually allow the dammed water to flow through, Egyptian officials remain wary of Ethiopia’s intentions. They demanded in October of last year the creation of a tripartite committee, now at work, to study the new dam’s effects and are worried the project could set an unwelcome precedent for more ambitious schemes in the future.

At 6,000 megawatts, the dam would be the largest hydroelectric power plant in Africa, with a reservoir capable of holding roughly 65 billion cubic meters of water.

“It will be a renaissance for the Ethiopian system,” Abey said. “The Nile is the main source of Egypt’s economy, and if the amount of water they use is reduced, it will be a big problem. But we have the right to use it.”

More from GlobalPost: Video: Ethiopia claims its fair share of the Nile

Such ambitions by upstream states are contributing to the gradual loosening of Egypt’s 5,000-year grip on its nearly sole source of freshwater, threatening not only the desert nation’s ability to grow enough food for its expanding population, but also its political stability and regional hegemony.

Egypt’s uprising ushered in a period of political and monetary volatility, stalling the economy, shaking up relations with the US and kicking off a year of sporadic protests and clashes between protesters and Egyptian security forces.

All of this has diminished the Egyptian government’s traditional ability to stonewall both financing and diplomatic support for independent Nile Basin projects.

“Ninety-five percent of Egypt’s water comes from the Nile. We depend on the Nile more than any other country,” said Hani Raslan, an expert on water politics at the government-affiliated Al-Ahram Center for Political Strategic Studies in Cairo.

“But right now, the [Egyptian] government is only a transitional government,” he said. “It has nothing to do with the long-term plan for the Nile, and is only paying attention to our internal affairs.”

The importance of the Nile to Egypt is hard to exaggerate. Like a slender, green thread, the waterway fastens Upper Egypt in the south to Lower Egypt in the north, and has nurtured agricultural civilizations in its verdant Delta for millennia.

More from GlobalPost: Could a lack of food and water spark Egypt's next revolution?

As a result, and also because of significant US financial and military patronage over the years, Egypt has long been able to dominate the terms of Nile basin negotiations, thwarting independent water projects by other countries and manipulating international customary water law to maintain the status quo, water experts said.

“Egypt did have, until fairly recently, some kind of ideological hegemony [in the Nile Basin],” said Richard Tutwiler, director of the Desert Development Center at the American University in Cairo, a research facility aimed at serving Egypt’s desert communities.

“They were able to frame the entire issue of Nile waters in their own context, both within the basin, but more importantly outside the basin and in international forums and so forth,” he said.

“The UN moved on to an international water law treaty standard incorporating equitable distribution [of water resources],” Anderson said. “But the IMF and World Bank … upheld their regional alliance structures in Egypt’s favor … thus preventing any forward movement for the rest of the Nile states.”

Since Egypt’s revolution, however, its new rulers have made decisions that run afoul of the organizations that once helped it maintain its control over the Nile.

Last spring, for instance, Egypt’s headstrong military rulers scoffed at the International Monetary Fund’s offer of a $3.2 billion loan package — only to later backtrack and ask again for the funds. They also brazenly put American democracy activists and their Egyptian colleagues on trial for attempting to subvert the state, souring relations with the US, the IMF’s largest stakeholder.

Analysts say Western donors are wary, and that the Egyptian government’s erratic behavior may temper support for its Nile dominance in the future.

In addition, Anderson said, China’s willingness to finance a number of Ethiopia’s dams, including the new Grand Renaissance Dam, has startled Egyptian officials, and indicates a potential new regional order in which US largesse may no longer secure Egypt’s place as the Nile Basin’s most powerful state.

“Egypt has been asking these countries to come together so we can reach an agreement on the Nile,” said Al Ahram’s Raslan, adding that because Egypt receives negligible rainfall, its water quota should remain the same under any new agreement.

“But no one is responding to Egypt’s call. These countries, especially Ethiopia, are making a grave mistake,” he said. “Because Egypt is not a weak country. If it was ever in real peril, it won’t be silent.”