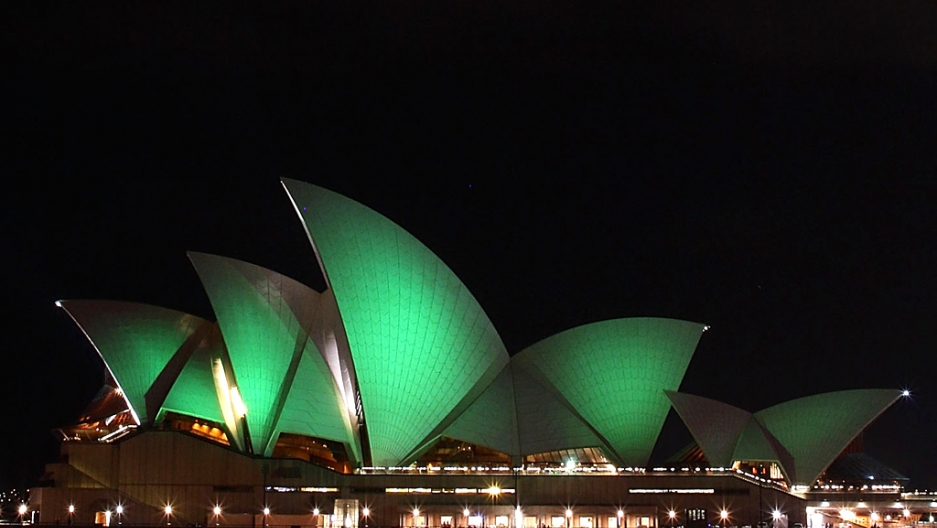 BRISBANE, Australia — Despite three very good reasons not to leave his homeland, Kevin Dwyer swapped the economic — and literal — gloom of Ireland for the sunny climes of Australia.

He said financial desperation forced him to part with his partner and two children last October, and travel for an indefinite period to a place where he believed the streets were lined with gold.

Dwyer is part of a modern wave of economic migrants driven from Europe — and from Ireland in particular — by rising rates of unemployment.

America still beckons with promises of high-paying jobs and opportunity, but Australia is growing rapidly as a destination of choice. In particular, an influx of Irish immigrants has arrived.

While not all Australians are welcoming them, most say the immigrants are a boon to the country — especially the Irish, many of whom have found a place in the work force aiding the construction boom.

The numbers are conflicting, as is often the case when illegal immigration is involved. But they speak for themselves.

According to official figures from the Australian Department of Immigration and Citizenship figures reveal a 68 percent jump in the number of visas granted to Irish workers in the past year — 3095 arrived in 2011, up from 1840 during the corresponding period in 2010. That might not sound like a big number, but adjusting for population it's equivalent to about 45,000 immigrants in US — roughly the size America's fourth biggest immigration group, the Filippinos.

Others see a far bigger influx. A widely cited Economic and Social Research Institute study from 2010 found that 24,000 Irish emigrants had headed to Australia, oustripping those bound for the UK and the US.

Meanwhile, Europe's economic recession has well and truly seized the Celtic Tiger by the tail.

The Irish have been heading to Australia for centuries. Some Irish immigrants date back to the First Fleet that arrived in 1788 and the earliest convict transports of the late 1700s — a joint venture of sorts with the British. The potato famine of the 1840s and the corresponding Australian gold rush set off new wave of migration to Australia, for those who could afford the fare.

The steady stream of Irish immigrants, any of whom arrive in Australia armed with advanced qualifications, is helping to fill yawning gaps in the work force, particularly in mining and construction industries which are in large part fueling Australia's prolonged economic boom.

The country just capped its 20th consecutive year of growth, and the West Australian Chamber of Commerce and Industry has forecast that it will need 500,000 extra workers by 2020. Based on recent trends, a shortfall of 150,000 Western Australian workers has been predicted by 2017.

"It's an economic powerhouse," Collier told a recruitment drive in Dublin last July. "With more than [$192 billion] of resource and infrastructure projects planned, Western Australia is on the cusp of a 25-year expansion, which will drive the nation's economy."

More from GlobalPost: The truth about asylum-seekers in Australia

Meanwhile, Rob Knight, Northern Territory Minister for Business and Employment, told a recent jobs fair in Dublin that his region of Australia had tens of thousands of jobs to fill and desperately needs skilled workers for the construction, mining and services industry there.

On the other side of the country in the "sunshine state" of Queensland, Des Ryan — owner of a Brisbane-based building company and president of the Irish Australian Support Association — said there was a big demand for Irish workers in the state's mining towns.

After Ireland's own building industry had been decimated in the economic downturn, leaving 300,000 new houses standing vacant, many highly skilled tradespeople joined surveyors, architects, civil engineers and other professionals in transferring their skills Down Under.

"Education has been free in Ireland for a long time, so these are highly skilled people," said Ryan, who emigrated from Ireland 40 years ago. "They're different from the people who went to England and the US in the 1950s."

In Far North Queensland, the northernmost part of Queensland, the Royal Hotel at Ingham has for the past year played host to several waves of Irish workers providing labor for a major highway upgrade in the mountains of the Cardwell Range.

Sharryn, who works at the hotel and asked to go only by her first name, said she enjoyed the workers' presence, describing them as "really great. Really extra 'specially good. They were like family."

Keith Kearns, a 23-year-old carpenter from County Sligo in Ireland's west, said he moved to Brisbane with his Irish girlfriend at the first opportunity.

Since arriving in 2011, Kearns has extended his one-year visa. He has been home once to see his family in that time, and despite finding it "tough leaving" again for the 28-hour journey back to Australia, he decided to stay on in Australia.

Dwyer, also a carpenter, missed the age cut-off of 30 for the one-year working visa. However, so determined was he to secure a better future for his kids, a girl and boy aged 9 and 12, that he took the less traveled route of arriving in Australia jobless and searching for an employer to sponsor his stay.

"Look, none of us want to come. The difficulty is that we feel we have to. I know of a lot of guys who are illegal here — they've come for three months trying to pick up a sponsorship ... and they've stayed illegally."

Dwyer went home for a visit over Christmas, and his 12-year-old daughter cried at the airport when he had to leave.

Jason White, a 25-year-old surveying graduate is unequivocal about his reasons for relocating to Brisbane with his Australian-born girlfriend in early March: "Australia's become the new American Dream," he told GlobalPost, describing how many of Ireland's younger generation were looking Down Under for a chance at a better, more financially secure lifestyle, just as generations before them looked to Boston, New York and beyond.

White said that when he finished his university course in Ireland, "for every one job there were something like 67 people going for it. Word on the street was that in Australia, everyone was working in the mines making fortunes, working on farms making fortunes."

But the reality in Australia had not quite matched the hype, White said. Many construction employers wanted more extensive qualifications and more hands-on experience that an unemployed university graduate can offer. "I've applied for about 15 jobs in construction, but also basic restaurant work, bar work and the like. I haven't heard anything back," he said.

Nor are all Australians kind to the genial Irish backpacker generation, most of whom arrive armed with in Australia on "working holiday" visas.

An ad posted recently on the Australian version of Craigslist — Gumtree — caused a diplomatic incident of sorts by stating: “Bricklayer needed ASAP. $250 a day, no part-time workers and NO IRISH.”

Ryan puts this down to the over-enthusiasm of young Irish workers who, when they can't find a job in their field of expertise, will apply for several they know nothing about just to get working.

Then there are the headlines — these from the past year alone — reminding the young and Irish that Australia can be a life-changing experience, though not always for the better: "Young Irish tourist drowns during Whitsundays scuba diving trip"; "Irish tourist dies on Great Barrier Reef"; "Backpacker drowns while swimming Melbourne’s Yarra"; "Irish backpacker awarded $560,000 in damages after farm accident"; and last week, "Irish tourist Georoid Walsh dies after attack at Coogee."

Dwyer, the carpenter, has chosen to stay on in Australia, but he's far from romanticizing the country as a panacea to all his problems.

He's even kept his position as a paid local councilor in his town of New Ross, Ireland, raising a few eyebrows at home. He said the distance has not stopped him from faithfully representing the good folk of New Ross — with the help of email and social media.

"At home, most of my constituents would have contacted me via Facebook anyway," he said.