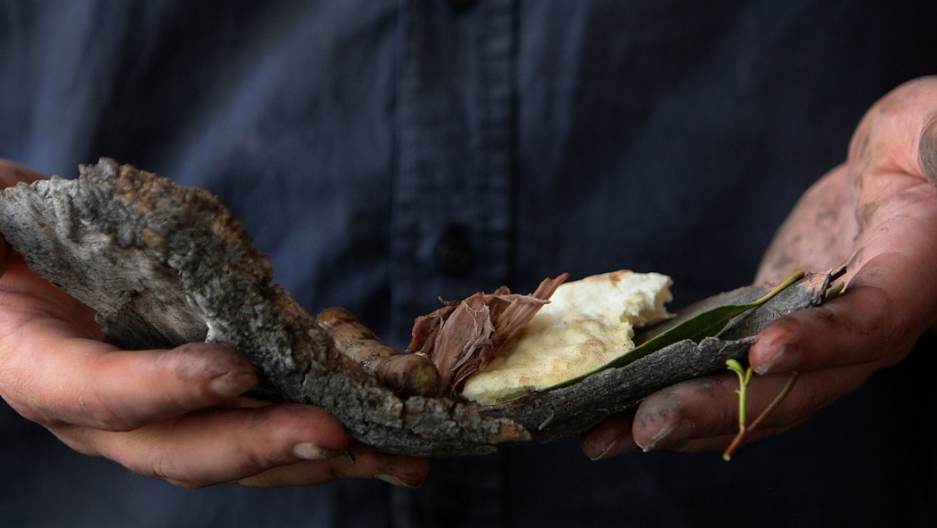 MALMO, Sweden — The first thing that Rasmus Gronbech wants you to know about his food is that it’s not ‘New Nordic.’

Gronbech, 38, has been one of Denmark’s most renowned chefs ever since he was crowned “chef of the year” back in 1998. His new restaurant is one of four in Copenhagen to win its first Michelin star last month.

But instead of embracing the New Nordic cuisine that put Denmark on the global gastronomic map, Gronbech wants to stay as far away from it as he can.

‘New Nordic’ is probably the hottest trend in global cuisine right now, with chefs everywhere adapting its insistence on ultra-local ingredients, its passion for foraging unusual herbs, grains and roots, and its creative adaption of age-old preservation techniques.

But at home, the dogma is starting to seem like a constraint.

“We don’t want to do another copy of a Nordic Kitchen,” Gronbech proclaims when I meet him at the beginning of the Saturday rush at his restaurant Gronbech & Churchill — named after the British leader who opposed the Nazis in World War II. “That’s why we plow on with Mr. Churchill. We are fighting for our freedom, our gastronomic freedom.”

New Nordic started back in 2002, when René Redzepi, then a 24-year-old chef fresh from stints working at El Bulli in Spain and the French Laundry in California, caught the eye of Claus Meyer, a Danish TV chef.

The restaurant they founded, Noma, is at the forefront of the food world’s obsession with the ultra-local. It sources all its ingredients from Denmark, sending teams out to forage in the wild for unusual flowers, grasses, saps, roots, and even ants and grubs.

It’s been rated the top restaurant in the world, in the “50 Best” list published by Restaurant Magazine, for two years running.

And it has made Redzepi a star.

This month he made the front cover of Time magazine — at least on this side of the Atlantic.

The impact on Copenhagen has been immense. Three of the four restaurants that won new Michelin stars this month, and quite a few of those who won the lesser Bib Gourmand, follow its New Nordic precepts, pickling, drying, or smoking foraged ingredients.

But for Grønbech, what started off as a creatively liberating constraint has become a crippling dogma.

“We love olive oil,” he protests. “Why can’t we use it just because we are in Denmark?”

Gronbech isn’t the first to raise such questions.

Back in May last year, there was an article in Denmark’s Politiken newspaper titled provocatively, “Noma is Fascism in avant-garde clothing.”

“There are striking similarities between Nazism and the new avant-garde modern Nordic cuisine, whose chief representative is the restaurant, Noma,” the article concluded, pointing to Redzepi’s push to invent a pure, untarnished Nordic cuisine, using only Nordic ingredients, and rejecting outside influence — specifically French and Italian.

It is no surprise, it added, to unintentionally comic effect, that the waiters wear brown shirts.

The Michelin Guide has also only given Noma half-hearted support, awarding it its second star in 2007, but resisting pressure to give it a third star.

Read more: Chocolate and bacon? Don't mind if I do

This is perhaps predictable, given that for years Michelin has offered its highest ratings for exactly the kind of French gastronomy Noma rejects.

In another sign of the backlash, Claus Meyer, has been embroiled in a scandal over alleged mistreatment of staff in his bakery, and other outfits.

This is not to say that Denmark’s food critics and chefs no longer admire Noma.

“I love what René is doing,” says Gronbech. “I just don’t want to make another copy.”

Most foodies were convinced that Noma would finally win its third Michelin star this month.

Many were upset when it didn’t.

“I don’t understand why they haven’t given them a third star,” said Helle Bronnum Carlsen, food critic at Denmark’s Politiken newspaper. “You get so much more new thinking at Noma. It must be something to do with them [the guide] being French.”

But Bronnum Carlsen admitted that drawing some of the glory away from Noma might be a good thing.

“Sometimes, when you have a star like Noma, they take all the publicity, all the attention is paid to them, so in some way I’m quite happy today, because [Michelin] appreciated some other wonderful restaurants.”

Few take seriously the accusation that Noma is a culinary expression of a nationalist ideology.

Redzepi is himself an immigrant, the son of a Macedonian taxi driver, and his training has been impeccably cosmopolitan, with a period working under Ferran Adrià, the Catalan co-founder of ‘molecular gastronomy’ who was once hailed as one of the world’s most innovative chefs, at El Bulli near Barcelona.

The enthusiasm with which New Nordic cuisine has been embraced internationally suggests that there’s more to the craze than narrow food nationalism.

Not all ‘New Nordic’ restaurants are as fanatically dogmatic as Noma. At Den Rode Cottage, Anita Klemensen and Lars Thomsen end their present menu with a dessert made from very un-Danish lemons, explaining that by mid-March, the local apples are past their prime.

And even Puglisi, who served for two-and-a-half years as Redzepi’s sous chef, wants to be seen as more than just a disciple.

According to Michelin, Relæ’s selling point is the “original combinations” and “innovative use of vegetables.”

It follows ‘Nordic’ precepts, but is also experimental in other ways.

“You need to make your own kitchen. We’re not at all trying to do what Noma does,” Puglisi explains. “We learned a lot of things. But we try to serve a meal that you can’t get at Noma.”