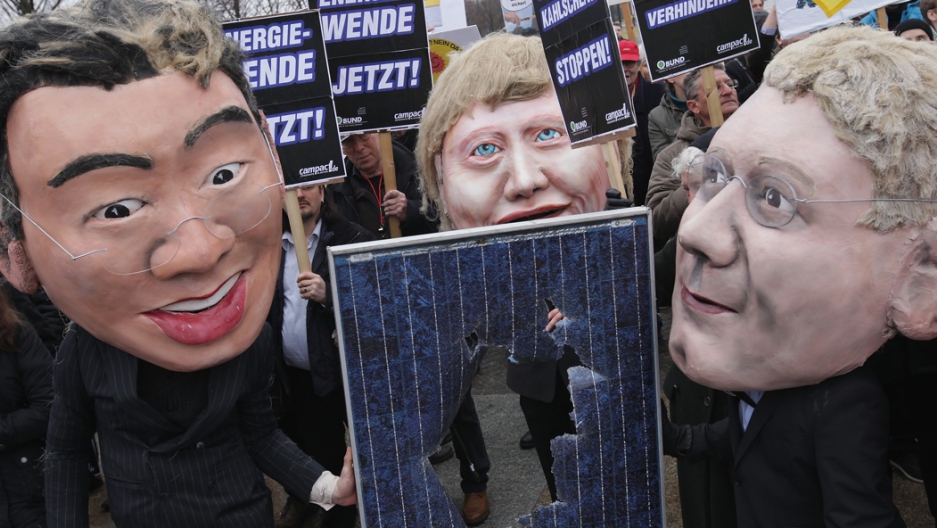 BRUSSELS, Belgium — The vision of innovative, environmentally friendly European industries leading the continent out of its economic quagmire with a surge of green growth, has long been a favorite for Europe’s leaders.

“If Europe is to emerge stronger from the crisis, we need more than ever to stimulate smart and green economic growth, underpinned by knowledge and innovation,” European Commission President Jose Manuel Barroso declared recently.

Lately however, Europe’s bright-green future has been looking a little pale.

The announcement this week that Germany’s Q-Cells, at one time the world’s largest producer of photovoltaic cells for solar panels, was filing for insolvency is the latest in a series of high-profile collapses in Europe’s once-bright solar power industry.

Q-cells suffered losses of 846 million euros last year and is the fourth major German solar company to go under since December.

France’s market leader, Evasol, was reported close to bankruptcy last week, barely a month since the state power company stepped in to rescue Photowatt, another prominent manufacturer of the photovoltaic cells.

Too many European companies, he acknowledged, have been slow to adapt to a rapidly changing market and relied for too long on government subsidies. “This was never realistic and now it’s time to realize that those days are over,” he told GlobalPost.

Denmark’s Vestas, the world’s largest manufacturer of wind turbines, made a loss last year for the first time since 2005. Its market share has dropped from 28 percent in 2007 to just 12.9 percent last year. Four of the top 10 turbine producers are now Chinese, including second place Goldwind.

“Things are difficult,” says Julian Scola, communications director of the European Wind Energy Association. “It’s a bumpy ride for some companies because of changes in the support mechanisms, the level of competition.”

Once dismissed as a tree-hugger’s pipedream, renewable energy is now a global industry generating around 13 percent of the world’s power and $200 billion-a-year in investments. Ironically, China, long derided by Europeans as the world’s biggest polluter and the main obstacle to global climate-change pacts, is set to replace Europe as the world’s largest renewables market over the next few of years.

China has earmarked $800 billion for developing non-carbon energies up to 2020 and is already the largest producer of wind power.

Other emerging powers are following the Chinese lead. Renewable energy markets in India, the Middle East, Africa and Latin America are expected to grow by an annual average of up to 18 percent over the decade, according to a study released last year by Bloomberg New Energy Finance.

Rather than taking advantage of this expansion, European companies who pioneered renewable technologies have found themselves overtaken by cheaper rivals from China and elsewhere.

Q-cells was valued at almost 8 billion euros ($10.5 billion) in 2007 and lay at the heart of a booming former coal mining region of eastern Germany nicknamed “Solar Valley.”

As Europe’s financial crisis began to bite however, government cutbacks hit the renewable industry hard — from the end of subsidies for families installing solar panels on their rooftops to cancelled contracts for major renewable projects. Although the market for renewables is still expanding — the growth rate of photovoltaic energy reached almost 70 percent in 2011 — supply is outstripping demand, pushing down prices and leaving European companies competing for space with Chinese rivals in a near-saturated market.

The United States imposed anti-dumping duties on Chinese solar panel imports on March 20, six months after the bankruptcy of California-based manufacturer Solyndra. US officials say imports of Chinese solar panels have more than tripled since 2009, to reach $3.1 billion last year.

Some European solar companies are urging their own trade authorities to also initiate anti-dumping procedures against Chinese imports.

Meanwhile, the renewables industry — which employs 1.1 million people in the European Union — is hoping EU governments will maintain domestic demand by refusing to allow the economic crisis to scare them out of ambitious commitments to switch to green energy.

“European leaders must keep calm and not panic because of the financial turbulence we are in at the moment,” says Scola from the wind energy association. “Sudden shifts in policy are not helpful.”

The German parliament approved subsidy cuts to the solar industry of up to 29 percent last week, and the Italian government is reportedly planning to scale back state incentives to renewable energy that had been expected to reach 9 billion euros ($11.8 billion) this year.

The EU has a legally binding commitment to getting 20 percent of its energy from renewable sources by 2020, compared to the current 12 percent. Its 27 member nations are debating a contentious “roadmap” that proposes setting a 2050 target of between 55 and 75 percent for renewable energy use.

Although they are far from agreed, such ambitious targets would mean a huge boost in demand of wind turbines, solar panels and the like. It remains to be seen if they’d be made by European, or Chinese, companies.