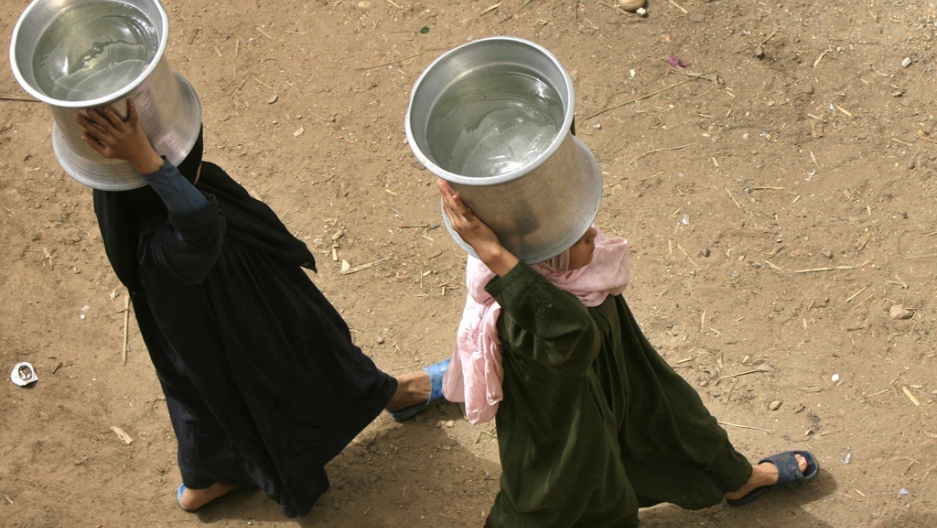 Egyptian women walk with containers filled with water in al-Rahawe village, outside of Cairo, on May 27, 2010. Thousands of Egyptians living just a stone's throw from the Nile suffer supply and sanitation problems.
Credit: Khaled Desouki
Share

KAFR AL SHEIKH, Egypt and MARAWI, Ethiopia — When construction began on the Nile’s Aswan Dam in 1960, in the southern reaches of Egypt, Egyptians were sure they were about to tame the world's longest river.

“Before the dam, the people’s lives here were much worse. The water would rise and fall without predictability,” said Abdullah Ati, a 42-year-old wheat and clover farmer in the northern agricultural province of Kafr Al Sheikh, relaying his father’s tales from the pre-dam era.

But more than 50 years after Egypt’s firebrand socialist president, Gamal Abdel Nasser, seized on fevered Egyptian nationalism to build the dam and establish the country’s dominance over the Nile, this arid North African nation is facing threats to its near-sole source of freshwater.

With rapid population growth, limited agricultural land and recent challenges to its majority share of Nile waters by upstream states, the United Nations now says Egypt could be water scarce by 2025.

More from GlobalPost: Egypt is losing its grip on the Nile

“In a sense, the average Egyptian is deprived of water,” said Hani Raslan, an expert on water politics at the government-affiliated Al-Ahram Center for Political and Strategic Studies in Cairo.

“The average per capita water use in Egypt is 700 cubic meters [per year], while around the world, it’s about 1,000 cubic meters,” he said. “We are trying to find new sources of water. But soon, [there] will be less than 500 cubic meters.”

It is not that Egyptians are necessarily thirsty. Domestic consumption of freshwater in local households makes up less than 20 percent of the roughly 64 billion cubic meters of water Egypt consumes each year, 55.5 billion of which come from the Nile.

The issue lies in Egypt’s pressing need to feed its exploding population through the expansion and irrigation of the country’s farmland — just 6 percent of its total area —with the same or an even lesser amount of water.

According to the Ministry of Water Resources and Irrigation, Egypt will need 20 percent more water in 2020. Its population, according to government projections, will likely grow from 80 million now to 98.7 million in 2025.

“Egypt is changing, and it has a lot to do with population growth,” said Richard Tutwiler, director of the Desert Development Center at the American University in Cairo, a research facility aimed at serving Egypt’s desert communities. “Everything is irrigated here, yet the water resource has not increased.”

More from GlobalPost: Egypt's next revolution could be over food and water

Today, Egypt’s irrigation network draws almost entirely from Nasser’s dam, called the Aswan High Dam, which regulates more than 18,000 miles of canals and sub-canals that push out into the country’s farms adjacent to the river.

The system, however noble in its intentions, is highly inefficient, irrigation experts say. The surface irrigation of crops through the canals, for instance, means as much as 3 billion cubic meters of Nile water is lost each year to evaporation under Egypt’s hot, desert sun.

Also, farmers located at the heads of canals have better access to an abundant supply of quality water than those at the canals’ tails, says Ahmed Al Hennawy, professor of irrigation and soil sciences at Kafr Al Sheikh University.

“The farmers, they take the water from the canal without any planning,” Al Hennawy said. That forces farmers in his village at the end of a canal to use run-off and even sewage water from farming hamlets nearby to irrigate their cotton, rice and corn fields.

“A lot of Egyptians don’t realize we have a lot of water issues,” said Sherif Hosny, CEO of a for-profit company called Schaduf — the German word for a simple agricultural tool used in some of the early gardens of ancient Egypt. His company helps low-income families use hydroponics, a process of growing plants without soil, to establish small gardens on Cairo’s many rooftops.

“They see the Nile flowing,” he said. “And they think everything is fine.”

Having the Nile as the solitary source of freshwater was once a blessing for Egypt’s rulers, enabling the pharaohs and subsequent governments to forge a centralized system of administration and infrastructure anchored in the river and its adjacent communities.

But now, to ease over-crowding near the river, Egypt’s government is encouraging its swollen population to move away from the Nile and into the desert — which makes up 95 percent of its area. About half of Egypt’s 80 million people live in the fertile Nile Delta north of Cairo.

The government is offering tracts of sandy wasteland at low-cost if settlers pledge to irrigate the barren parcels.

The Egyptian government has managed to boost its tillable land over the last 50 years by one-quarter, using canals to bring Nile water to the desert. But most of those plots were snatched up by commercial mega-farms that churn out cash crops — like strawberries — for export rather than local consumption. In the end, these green desert farms did little to ease the scarcity of food in Egypt.

“The policy for 60 years has been to expand the cultivated surface of Egypt, getting people out of the valley and into the desert,” Tutwiler said. “But it’s a different environment out there. The drainage issues are different. And the irrigation, it needs more power. It involves a much higher capital investment that poor farmers just don’t have.”

More from GlobalPost: Photos: With the Nile just miles away, Ethiopia's farmers struggle to find water

Blooming the desert requires funds to build modern irrigation systems capable of pumping water, with energy-fueled, pressurized pipes, out of the Nile Valley.

While it helps alleviate pressure on the Nile Delta, experts say the desert irrigation program only reduces Egypt’s ability to conserve water.

“Think about Egypt as kind of a valley. Gravity suggests if you put too much water on your field in upper [southern] Egypt, it trickles back into the Nile, and you can put it back on a field in lower [northern] Egypt,” said Tutwiler, describing the flood irrigation system that originates at the Aswan Dam in the south.

“But if you take the water out of the valley and put it in the desert, it doesn’t go back into the Nile. It’s lost in the sand.”

Heba Habib contributed reporting for this article from Cairo, Egypt.