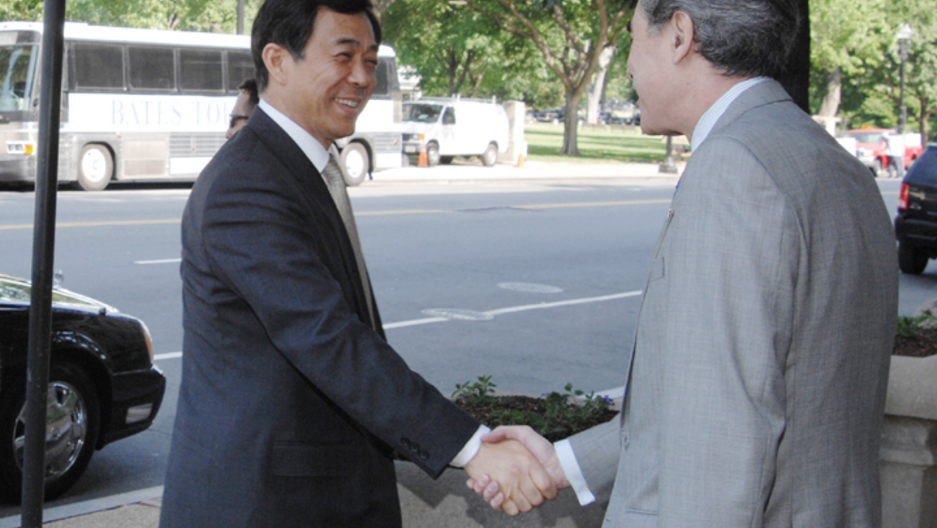 Chinese Minister Bo Xilai meets with U.S. Commerce Secretary Carlos Gutierrez in 2007. Bo has been embroiled in controversy since he was sacked from a powerful party leadership position in southwest China. (Photo courtesy of U.S. Commerce Department.)

The Liberation Army Daily, China's top military newspaper, has warned troops to ignore any rumors they hear about a foiled coup — swirling on the Internet — and steel themselves for an "ideological struggle" as the Communist Party undergoes changes to its central leadership.

Viv Marsh, the Asia-Pacific editor for the BBC, said it seems there's some sort of political power struggle that's going on — and it's probably been going on for quite some time.

"The reason why we heard about this was the sudden sacking of what had been a very powerful man, Bo Xilai, who was the Chongqing party boss in southwestern China," Marsh said.

When he was abruptly removed, Marsh said, it sent the populace into a frenzy of rumors and gossip over what might be going on at the top of the political pyramid in China.

"Toward the end of the March, mostly over the Internet, there were rumors that there had been some sort of coup. Obviously that was not the case, but there were pictures of tanks and armored cars on city streets. It turned out some of these photos were old, and some of them were not even of Beijing."

Marsh said while everything is on course now, that rattled the Chinese leadership to a great extent.

There was also controversy over Bo's top police chief, his right-hand man, attempting to defect to the United States over a disagreement with Bo — and fear for his own safety. He did not ultimately defect, but it was another black eye as the party leaders try to negotiate the political transition.

"We know, because the Chinese official media said it and the United States government said it, we know that he spent one day, and also overnight, in the U.S. consulate in Chengdu," Marsh said. "Subsequently, he seems to have been taken to Beijing for questioning. We know that he is being investigated; we have heard nothing new."

Bo has been removed from his local party position over the controversy, but he remains on China's Politburo, which presents a very mixed picture of just what is transpiring.

"If everything was plain-sailing politically, if you were removed from one job you'd be removed from the other," Marsh said. "The fact that this has not happened might indicate that there is some division in opinion in China's leadership."