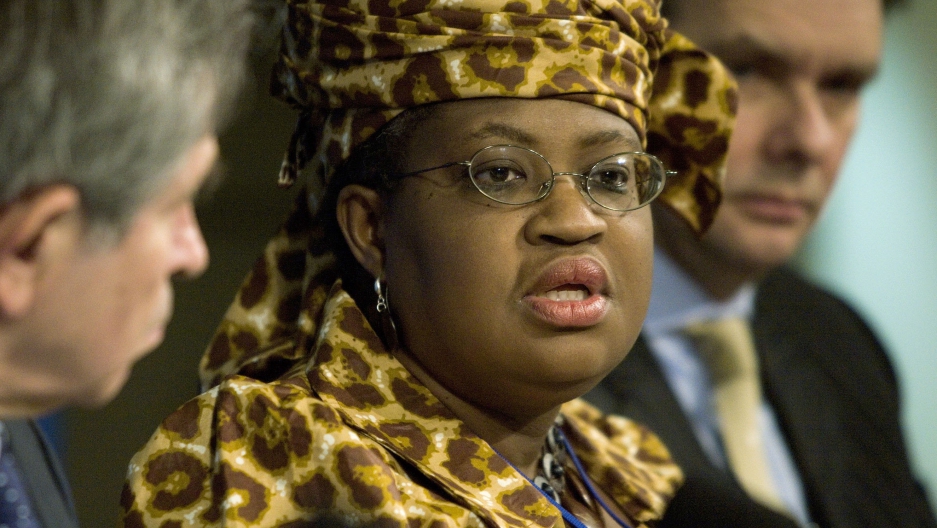 ABUJA, Nigeria — As the World Bank prepares to select its next president Friday, the candidacy of Nigerian finance minister Ngozi Okonjo-Iweala has many Nigerians calling on the US to step aside and let Africa lead.

Okonjo-Iweala is the most qualified candidate for the job, say Nigerian commentators and economic analysts, despite her role in a controversial fuel-subsidy cut earlier this year, and a fair, transparent selection process should result in her appointment.

“It would be a great concession from the Western world toward recognizing emerging economies,” Bismark Rewane, the CEO of Nigerian economic consultants Financial Derivatives Company, told GlobalPost.

In the 68 years since the bank's founding, the US has always nominated an American candidate to lead it and the shareholders have always appointed that candidate.

In recent years, this has led to complaints that the US has too great a say in an organization whose primary beneficiaries are developing countries.

This year the debate has intensified around the candidacy of Okonjo-Iweala, a former World Bank managing director, who was nominated for the bank’s top seat last month, along with Colombia’s former finance minister, José Antonio Ocampo.

Okonjo-Iweala's appointment could give a much needed boost to Africa's most populous country and largest oil exporter, said Rewane.

Nigeria has seen mass protests and hundreds killed by Islamist militants already this year. In January, Nigerians took to the streets, demanding the re-instatement of the canceled fuel subsidy after gas prices skyrocketed.

Economists generally hailed the cancelation, saying the subsidy institutionalized corruption and stunted development. But after the widespread strikes threatened the nation’s economy, the subsidy was partially reinstated. Rewane said the public’s anger was fueled by the belief that officials were not acting in the interest of the people.

"The reason we had a strike in January is because [government] credibility has been eroded very badly," Rewane said. “You can’t ask people to make sacrifices if they don’t trust you.”

In the aftermath of the subsidy cut, Okonjo-Iweala “almost became Nigeria’s least admired public servant,” according to an editorial in Nigeria’s Vanguard. The controversy, however, does not distract from her accomplishments, according to author Rotimi Fasan, who also called for her appointment.

“It would be a big minus for the World Bank if America has her way again,” Fasan writes. “Dr. Okonjo-Iweala is eminently qualified, her experience is more relevant to the office and her long insider position in the World Bank makes her the better candidate.”

Other local commentators are more enthusiastic in their support, calling the minister, “Africa’s bride and pride.”

“All is set as Africa and Africans eagerly wait to have an African, for the first time in the history of the World Bank chosen as its president,” reads an editorial in the Nigerian Tribune.

Originally nominated by South Africa, Nigeria and Angola, Okonjo-Iweala later won endorsements from the African Union, regional governing bodies, the Nigerian presidency, and news organizations across the continent. As Okonjo-Iweala's bid gains momentum, the World Bank is under increasing pressure to seriously consider her candidacy.

The World Bank was urged to be seen "standing on the right side of history," by women’s rights group Graca Machel Trust, in a statement released Wednesday.  Other African aid organizations, human rights groups, business associations and regional leaders have voiced their support for Okonjo-Iweala.

Leading Western news organizations like The Guardian and The Economist have also endorsed Okonjo-Iweala. The Economist called on the World Bank to take its own advice by rejecting “cronyism and fill each important job with the best candidate available.

“In appointing its next president, the bank’s board should reject the nominee of its most influential shareholder, America, and pick Nigeria’s Ngozi Okonjo-Iweala,” wrote The Economist.

But many Americans say the groundswell for the Nigerian is unrealistic.

World Bank President Robert Zoellick, speaking in India last week, said the bank must consider the consequences of excluding Americans from leadership roles in international organizations. He said the tradition of appointing Americans to the bank’s top position helps maintain US support.

“I often have to fight against those in the United States that want to move away from these institutions,” Zoellick told reporters on March 30, according to a World Bank transcript. “So, therefore, I believe it's important for the US to have some people that are in leadership roles in some of the institutions. Now, that may or may not be the bank.”

“He is a highly competent individual who spearheaded efforts and contributed to AIDS issues,” Azumi said in Tokyo, according to Bloomberg News. “We judge he’s an appropriate candidate for the World Bank.”

Another commentator for Bloomberg News endorsed Kim’s bid, saying the bank needs to maintain maximum access to American power and funding as it reinvents itself for the modern age.

“Is this moment of deep uncertainty really the ideal time to push the sole superpower and world’s biggest economy out of the chair?” asks Todd Moss, a senior fellow at the Center for Global Development.

Moss also writes that Obama could face political heat in upcoming elections if he moves away from US control of the bank’s presidency, at the same time calling Okonjo-Iweala “almost certainly” the most qualified person for the job.

“No administration, in the US or anywhere else, gives away a plum international seat just because it’s the right thing to do,” Moss writes.