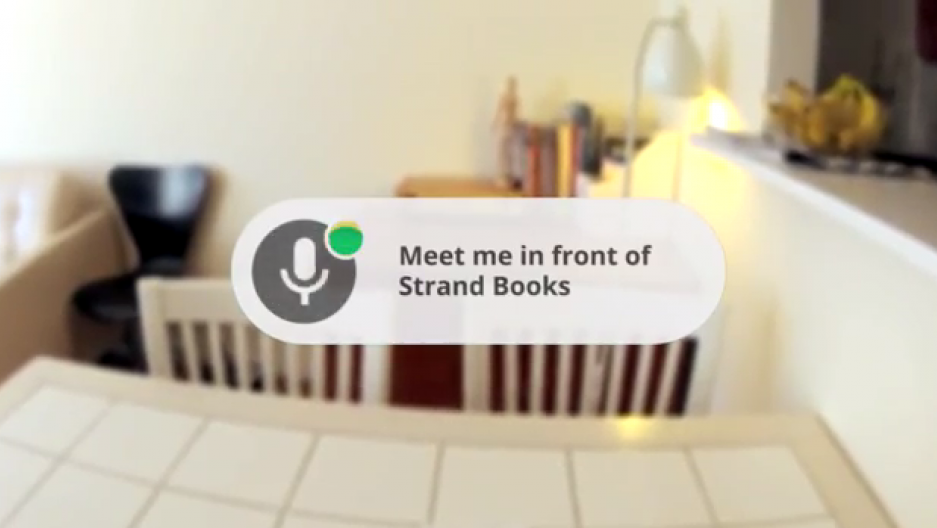 In this mock-up, Google shows off what their augmented reality glasses might show you if you were responding to a text message with your voice. (Photo courtesy of Google's Project Glass.)

Google's got a new project that aims, literally, to change the way you see the world.

In an announcement on its Google+ social network, a group of Google engineers unveiled Project Glass, or an effort to build a pair of glasses that can pull in information from the Internet to augment the picture you see of the world around you.

Want to know what a text message says without looking on your phone? It could do that.

Need to know that a friend is just around the corner? A notification could pop up in the general direction of that person as well.

And if you want to respond to that text message, or see what the price of a product is, you only need use your voice. At least, that's the idea. The product is still a ways away from hitting the market, but Google's [x] team says they're unveiling the project in order to gather public input on what these glasses should do.

"A group of us from Google[x] started Project Glass to build this kind of technology, one that helps you explore and share your world, putting you back in the moment," the project engineers wrote.

The Google[x] group is the game group behind Google's effort to build self-driving cars. It's a product group that's designing projects that aren't core to Google's current business, but could prove valuable in the future.

There's no immediate word around when and whether Project Glass will become commercially available, but typically Google[x] works on projects that could be realized in a year or two — rather than ones that might be a decade or more from viability.

Google Chief Executive Larry Page has eliminated many of these projects, which often are unpopular with investors, since becoming the company's CEO last year. But he defends Google's commitment to speculative projects that could become big parts of the company's businesses.

Is this going to be a game-changer? Or Google's next big flop? PCWorld has a pro/con analyzing the announcement.