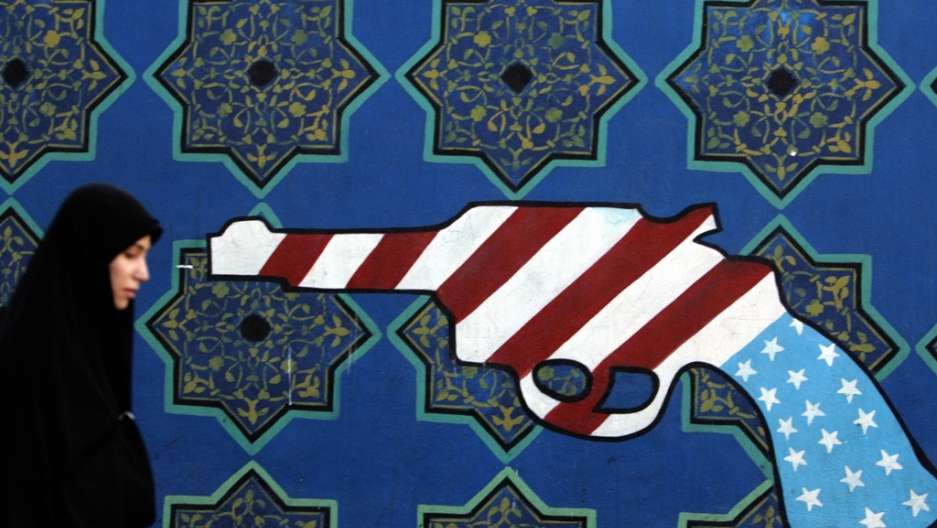 An Iranian woman walks past a mural painting of a revolver on the walls of the former US embassy in Tehran.
Credit: Atta Kenare
Share

Every week there is a flurry of stories about the ever-widening impact of ecomomic sanctions on Iran. This week, officials in both South Africa and Greece said they would stop importing Iranian oil.

But what does this really mean?

The United States, which is leading the push to enforce the sanctions, hopes the Iranian government will buckle under the economic pressure and give up its nuclear program. The United States, Israel and other Western powers believe Iran is using the program to build a nuclear bomb. Iran says it is only for peaceful purposes.

The real impact of the sanctions, however, is rarely reported.

The impact is felt primarily by average Iranians, who are increasingly struggling to afford food and other basic needs as the value of the Iranian currency plummets.

It is hard not to see parallels between Iran and Iraq. The United Nations Security Council, again led by the United States, first imposed sanctions on Iraq after it invaded Kuwait in 1990. After the Gulf War ended less than a year later, the sanctions were widened, justified by suspicions that Iraq harbored weapons of mass destruction.

More from GlobalPost: The Top 10 ways the US tries to undermine Iran

That justification has now been widely debunked. But using the same kind of intel from the same organization — the International Atomic Energy Agency — the West is again moving ahead with sanctions, this time on Iran. And if Iraq is anything to go by, the impact could be devastating.

The per capita income in Iraq dropped from more than $3,500 in 1989 to $450 in 1996. The same thing is now happening in Iran, where the value of the Iranian rial has decreased dramatically.

In Iraq, high rates of malnutrition, a lack of medical supplies and diseases from lack of clean water, were all reported as a result of the sanctions.

But perhaps the most hard-to-swallow statistic from that time period is the number of Iraqi children who are believed to have died as a result. At the most conservative estimate, researchers say about 100,000 children died from all manner of outcomes relating to the sanctions. Other estimates put the number at half a million or more.

This devastating impact was one of the justifications for the US invasion in 2003. The logic went that the sanctions were more destructive than a war would be. Of course, both the sanctions and the war were based on false claims that Iraq had weapons of mass destruction.

Is Iran now on the same path?

It's hard to get a sense of the impact from on the ground in Iran itself. Few foreign journalists are based in Iran and local ones are unable to report freely. But GlobalPost's Jason Rezaian, who lives in Tehran, has been reporting on the impact of sanctions for a year and a half.

Here's a quote from Maryam, a 26-year-old graduate student Rezaian interviewed in 2010:

“Obama … said that these sanctions are meant to affect the Islamic republic government, but without affecting people it can’t affect the government. It affects every aspect of our lives: transportation, the ingredients in the food we eat, even my university dues are all up considerably since this time last year, and no one in our family is earning any more money than we were then. We’re just happy to still have work.”

That was in 2010. Things have only gotten progressively worse.

“In the past, Iran produced everything we needed. Now we don’t even grow enough rice,” Hamed, who runs his family’s market in central Tehran, told GlobalPost in January. “We have to pay more to import goods for our customers. Unfortunately that means higher prices.”

Importing goods, too, is only going to get harder when the full range of sanctions take effect on July 1.

While the jury is still out on whether or not this will turn into another Iraq, it is worth keeping in mind — especially for those of us in the journalism industry — the lessons we learned during and after that time. Here's a 2010 discussion from Al Jazeera English that looks at the failure of the media in the run up to the Iraq War.