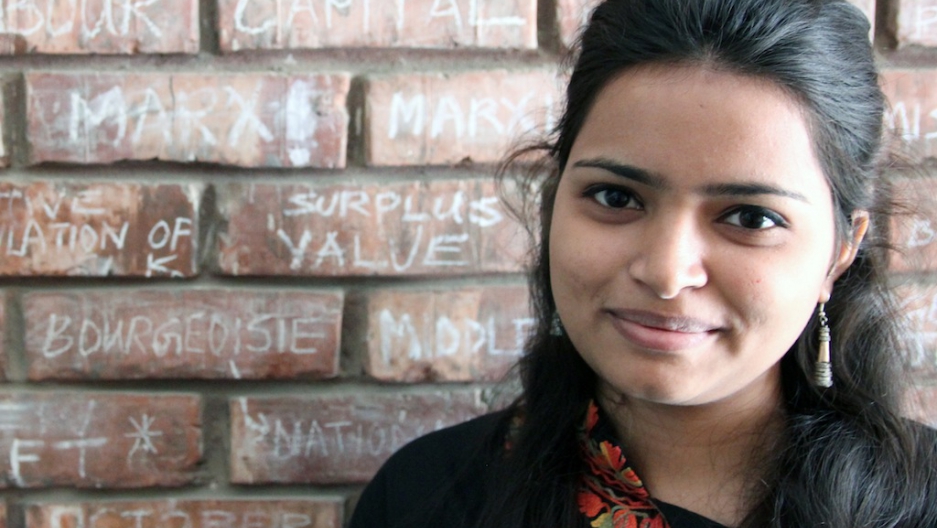 Minakshi Barman, 22, is studying for her master's degree. She said she believes that failure to act when encountered with domestic violence is something that affects all of Indian society, no matter the caste.
Credit: Benjamin Gottlieb
Share

NEW DELHI — “My husband beats me — even now,” laughs 50-year-old Sunena, dressed in a yellow polka-dotted sari with her hands folded across her lap.

In a dank, windowless room of a dilapidated one-story building in the Shahabad Dairy slum, nearly a dozen women unhesitatingly confess that their husbands beat them. They’re part of a self-help group of about 40 women that pools resources for community micro-loans.

The women’s nonchalance toward domestic violence doesn’t surprise Bulbuli Mukherjee, a media manager at Breakthrough, an international NGO with an office in Delhi. It’s a part of daily life for many Indian women, whether rich or poor. One of Breakthrough’s key commitments is ending spousal abuse in India, educating and empowering women and men through direct action. Mukherjee’s team has created an anti-abuse strategy as easy to use as asking a neighbor for a cup of tea.

Breakthrough’s “Ring the Bell” campaign started in 2008 and has been called “genius” for its simplicity. If you hear a domestic dispute at your neighbor’s place, just ring their doorbell. The sound signals awareness of what’s happening and, the group hopes, interrupts the violence.

Using a blitz of radio, television and billboard ads across India, Breakthrough encourages indirect intervention in domestic disputes, and reached an estimated 130 million people in the first two years of the campaign. But the organization faces a daily struggle against the deep-seated defense of privacy in family matters that runs through Indian culture, caste and religion.

Fifty-five percent of Indian women believe spousal abuse is tolerable, according to the most recent National Family Health Survey (2005-06). More than half the men surveyed said that if their wife disrespected their parents, hitting her would be acceptable.

“Ring the Bell” hasn’t yet reached the women of Shahabad Dairy. They would never intervene. “If you take up your family issues every time, then it is dishonoring to the family. So you might as well bear it and keep quiet,” said one through a translator. Another woman added, “There are difficulties we have to bear, there is happiness we have to bear. It’s part of our journey.” To interfere would be overstepping time-honored community boundaries, they insist.

It’s the same with upper class women in India, Mukherjee insists. “I think women who are in a posh area, they are more harassed. They don’t even have ten rupees to make a call; they can’t even go out. They’re totally dependent on their husbands.”

Some experts say the high incidence of spousal abuse in India is related to religion. The country is 85 percent Hindu, and some ancient Hindu texts that reinforce the sovereignty of men over women. Others, including the Manusmirti, an authoritative code of laws attributed to the early lawyer Manu between 200 B.C. and 200 A.D., promote direct violence against wives for showing any kind of disrespect or resisting her husband’s authority.

But Paridhi Gupta, a 22-year-old graduate student in sociology at Jawaharlal Nehru University, objected to its use as a justification for domestic violence. “The Manusmirti is not the only Indian text, and it’s a text that people have to learn to let go. It is not what the Hindu culture or Hinduism says. Some people would hang on to it but I don’t think that that defines Hinduism,” said Gupta. She also objected to the way people have used Hinduism to justify why husbands should suppress their wives.

Minakshi Barman, 22, is also studying for a master’s degree in the social sciences department at JNU. A Brahmin, the highest caste group and thus typically wealthiest, Barman agreed that failure to react to domestic violence affects all parts of Indian society. “Every religion. Even Hinduism. Even Islam. In the uppermost caste you can find the same thing, in the lowermost caste you can find the same thing,” she said. At the same time, she said, religion does play a huge role in determining behavior. It’s inextricably linked with the strong traditional family structure within Hinduism.

She also acknowledged that lack of agency in the lower castes prevents change. “There are some castes which do not have the confidence to come up and say things. Or even sometimes not even realize that they are being abused,” said Barman. She also said divisions exist between her generation and older generations as well as urban and rural communities.

“Ring the Bell” tailored its campaign to reach these different audiences. With government support, their radio ads penetrated rural areas, while television ads were ubiquitous in urban markets. JNU student Paridhi Gupta wants Breakthrough to do more. “There are a lot of people who would ignore this advertisement, who would change the channel and ignore it, so letting people know face to face that this is what is happening and that it’s okay to ring the bell. Nobody will know it’s you.”