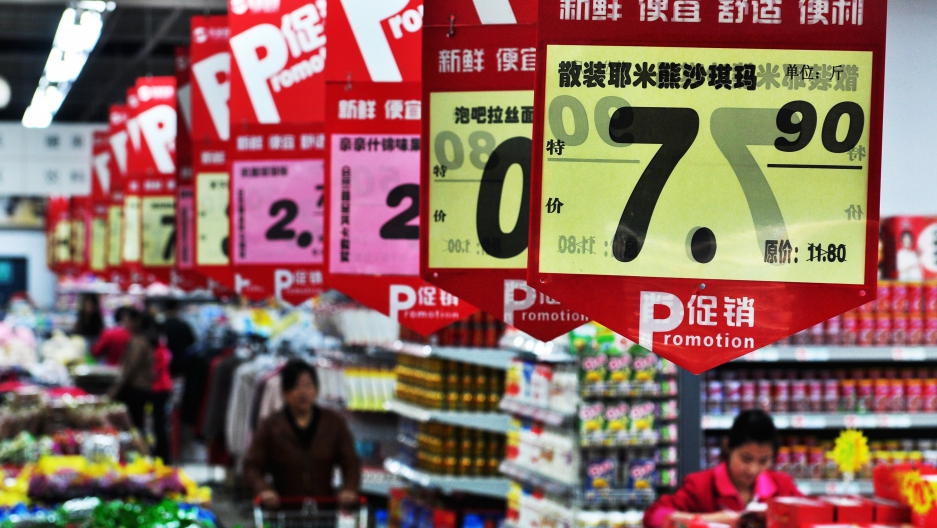 Customers shop at a supermarket in Zouping in northeast China's Shandong province on October 14, 2011. China in 2011 surpassed the US to become the world's largest grocery market, according to the Institute for Grocery Distribution.
Credit: STR
Share

China is now the world’s biggest market for groceries. And it’s only going to get bigger.

China’s grocery market will grow at twice the pace of the US market between now and 2015, according to the London-based Institute of Grocery Distribution, which tracks the details of the international grocery business.

At the end of 2011, China’s grocery market had an estimated value of about $960 trillion, the IGD said. The US grocery market, now the world’s second largest, was valued at $904 trillion.

China’s economy has been one of the strongest performing during the global recession. Even though growth is slowing, the latest tipping of the grocery scales is just one of many expected to emerge as global growth opportunities continue to shift toward Asia.

As the Guardian said, the IGD’s forecast echoes predictions the Chinese economy will become the world’s largest in the coming years. But economic and population growth are only part of the Chinese grocery growth story.

Chinese food prices spiked by 10.5 percent in January. Even though food inflation slowed to 6.2 percent in February, rising food prices are one of the biggest challenges for the Chinese officials trying to keep inflation under control, The New York Times said.

Beijing is trying to keep monthly inflation under 4 percent this year, the paper noted.

China, however, isn’t the only emerging grocery market gaining on the U.S.

The rest of the BRIC nations – Brazil, Russia and India – will round out the world’s top five grocery markets by 2015, the IGD report said.

India is expected to oust Japan from its spot as the world’s third largest grocery market.

The UK will likely become the world’s eighth largest grocery market by 2015, thanks to convenience stores like Tesco selling fresh foods.