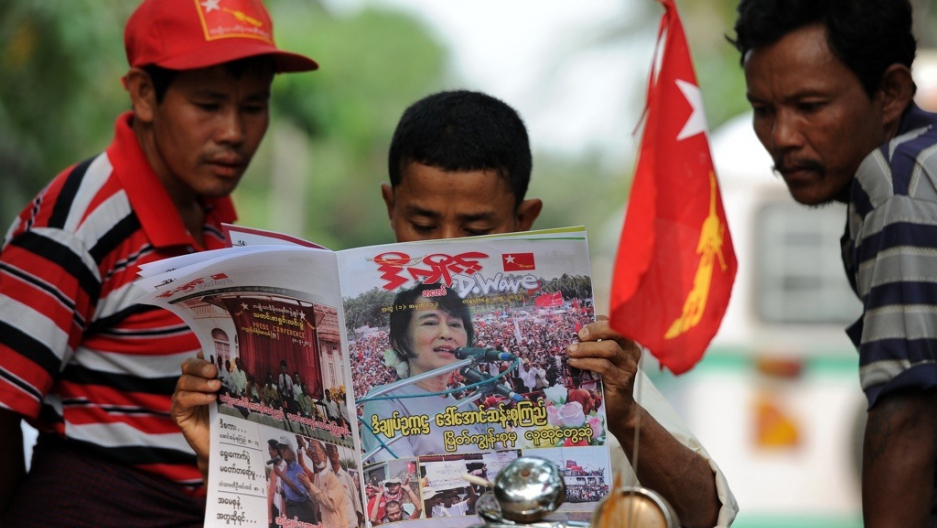 Men read a newspaper carrying a picture of Myanmar opposition leader Aung San Suu Kyi on its front-page a day after parliamentary by-elections across the country, in Yangon on April 2, 2012. Suu Kyi hailed a 'new era' for Myanmar and called for a show of political unity after her party claimed a major victory in landmark by-elections.
Credit: Soe Than Win
Share

CHAING MAI, Thailand — Burma held its long anticipated by-elections on April 1 for 45 seats in the national parliament. What was variously hyped as “Myanmar Decides,” “Burma’s Decision,” and “Myanmar’s Historic Vote” really achieved three things: it granted the democracy leader Aung San Suu Kyi a seat in parliament, gave President Thein Sein and his reformist camp significant international cachet, and demonstrated that even with serious limitations, Burma was on the road to reform.

Suu Kyi herself set the tone in a news conference on March 30, when she said, “I don't think we can consider it a genuine free and fair election if we consider what has been happening here over the last few months … (irregularities are) … really beyond what's acceptable in a democratic nation. Still, we are determined to go forward because that's what our people want.”

At the same time, the by-election results show just how much the Burmese people want reform and respect for human rights, and the depth of their support for Suu Kyi and her National League for Democracy (NLD).

The National League for Democracy has announced it won all 44 seats for which it fielded candidates, although official results won’t be available until later this week. Suu Kyi won in Kawhmu township, in the outskirts of Rangoon. She voted early in the morning and was received by exuberant supporters, after weeks of nationwide campaigning that drew unimaginable crowds of supporters. The NLD says it won three seats in the capital, Naypyidaw, including one for the former political prisoner and hip-hop star Zayar Thaw.

The NLD and other parties reported numerous voting irregularities. There were also complaints against NLD members for campaigning too close to polling places. It is doubtful the complaints will significantly alter the results, though.

The media scrum was intense, given that Western journalists have long been denied access to Burma, and Burmese media have been restricted by a heavy-handed censor and official intimidation. There didn’t appear to be significant restrictions on the media, with Western journalists freely broadcasting live from various points around Rangoon, interviewing government officials, and being able to report from polling places; in some cases they were invited in and shown ballots, which actually violated regulations. However, official media censorship still exists.

More from GlobalPost: Myanmar: What's in a name?

The estimated 159 foreign observers from Asia and the West, including representatives from the National Democratic Institute and International Republican Institute, by and large reported that things went smoothly, although two MPs from Australia were inexplicably denied visas to Burma days ahead of the election. The observer mission was largely a PR stunt in any case, since monitors were only permitted access at the last minute. Surin Pitsuwan, secretary general of the Association of Southeast Asian Nations (ASEAN), was over the top in his endorsement: “I have been in touch with the (ASEAN monitoring) teams very, very closely and they report full enthusiasm, full alert, full awareness of all parties involved in the by-elections. It's a good omen for Myanmar.”

That there were no major infractions related to the by-elections greatly increases the likelihood that some international sanctions and restrictions will be eased very soon. The EU and US are expected to loosen or even repeal some of the longstanding measures to shore up support for Thein Sein and other reformers in the system. However, foreign governments should not open the floodgates. They should revise sanctions gradually and in a measured and calibrated way that supports nascent reforms, but doesn’t derail them.

The challenges ahead are many. How they are met will also depend on how Suu Kyi pushes her new status as an MP backbencher when the fourth session of the national parliament sits later in 2012, and whether the NLD will be able to introduce sweeping changes through parliament such as repealing repressive laws long-used to silence government critics and throw them in prison. Progress on addressing abuses in ethnic areas is urgently needed; ceasefire discussions with ethnic armed groups have started. The floating of the Burmese currency (kyat), also on April 1, should be the precursor to broader economic reforms.

These by-elections have in many respects been a PR stunt that achieves several aims: to demonstrate the sincerity of broader reforms, to trigger easing of western sanctions, to incorporate Aung San Suu Kyi into the military-parliamentary complex and to justify increased engagement on a number of fronts.

On all measures it will probably work. But the fears are that the laudable rush to assist Burma’s transition could degenerate into a scramble of indecent haste that reveals more about the greed of the international community than their concern with Burma’s future. These by-elections were a necessary step toward long-term sustainable change that will meet its biggest test in 2015, when broader parliamentary elections will take place.

The interim should be a process of measured engagement, not carpet-bagging opportunism for international interests. Burma’s reforms need to be supported, but a scramble will only fuel a hell of good intentions as reforms face the reality of the challenges ahead.

David Scott Mathieson is a senior Asia researcher at Human Rights Watch who focuses on Burma.

Editor’s Note: GlobalPost's style is to refer to the country as Myanmar and Yangon as the capital, but Human Rights Watch prefers to use the terms Burma and Rangoon because the name change was made by the military dictatorship without the approval of the Burmese people.