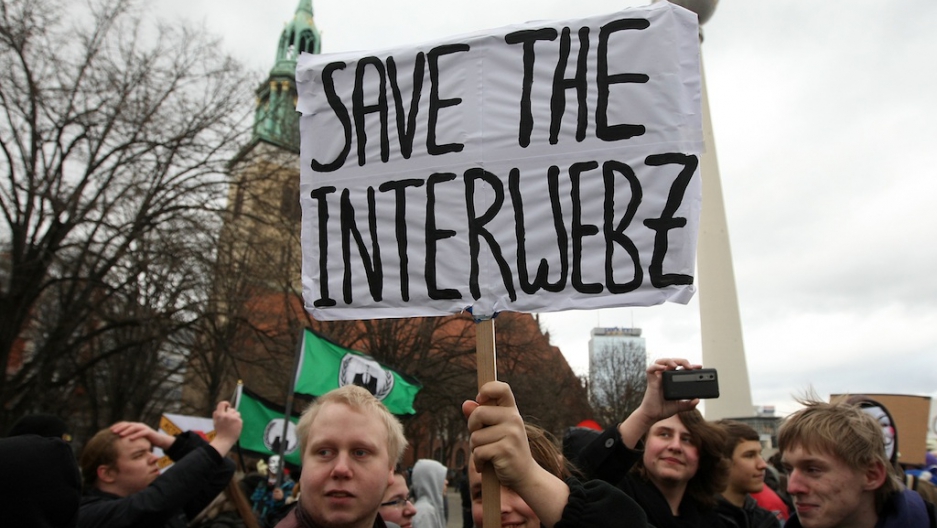 Activists protest during a demonstration against the Anti-Counterfeiting Trade Agreement (ACTA) on February 25, 2012 in Berlin, Germany. ACTA is a proposed treaty attempting to establish an international governing body with legal standards intended to protect intellectual property and prevent the production and sale of counterfeit goods. The German government has delayed a decision on the agreement, citing concerns by the Justice Ministry, and according to news reports is waiting for approval by the European Parliament prior to signing the multinational treaty.
Credit: Adam Berry
Share

In the US and Western Europe, recent legislation such as ACTA and SOPA have galvanized the masses to support a free and unfiltered internet. However some countries aren't so lucky, or free. In these places, the rights are gone and the debate is long over — if it ever really began.

Compiled from recent annual findings from Reporters without Borders and Freedom House [PDF] in association with the United Nations Democracy Fund, these are the world's worst places for internet freedom:

After the 2009 "green revolution," Iran's already dismal state of freedom of expression collapsed completely. Bloggers and internet dissidents have been rounded up and hauled away, where they're sentenced for crimes against the state or Islam, and some even face the death penalty. Iran's terrifying knowledge of every trick in the book doesn't make it easier to get online and even the respected TOR network, used to browse anonymously on the internet in most other countries, is difficult to access in Iran.

Monitors often slow connections or shut off access on days of cultural significance, when the government fears protests and organizing against the regime are more likely. And, worst of all, Iran is able to get around international watchdog organizations.

"Despite the sanctions adopted by European and US bodies against Iran, Reporters Without Borders is astonished by the government's ability to circumvent these measures by means of the 'dummy' companies it has created," reads the 2012 "Enemies of the Internet" report.

The home of the globe's largest firewall, China has banned all the global social networking sites (Facebook, Twitter, and YouTube), blocked any news of the Arab Spring revolutions last year and Occupy protests and seems to have an almost random censor system that very few sites make it through.

China's cyber-police, a futuristic gang of monitors who scour the internet all day, every day and evoke images of The Matrix, are particularly skilled at finding problems and solving them quickly. For example, when the the Chinese government didn't want foreign press to have access to the ethic riots in Xinjiang in 2009, it shut down the internet in the entire geographic region.

Even the Chinese versions of Twitter (Weibo) and Google (Baidu) comply with government monitors and surveillance while the government attacks the real, American Google with cyber attacks.

It's always hard to tell with Cuba. Almost no one has internet access as it is, but those who do are monitored by the government, which owns all the networks and all the media. According to Reporters Without Borders, only 2 percent of the population has access on the island. But, that didn't stop the creation of RedSocial, the Cuban social network, which allegedly goes as far as to ask users for their email passwords before getting an account.

There's hope that a fiberoptic internet cable from Venezuela will give more Cubans internet access, but others aren't sure a new cable will make a difference. The government will likely ration access to any kind of internet, even if it comes from a partner country.

One of the ways internet freedom is calculated by Freedom House is repercussions of non-compliance with a given regime's request for removing content from a website or blog. Bahrain's score in that area is 29 (Iran's is worse at 39, Estonia's better at 6) and recent outrage over the government's treatment of political prisoners and protesters in that country shows how big an issue this is. When internet users don't comply, they're jailed, then convicted at unfair trials. Because of this, an even more worrying trend has emerged, according to Reporters Without Borders - self-censorship.

In April, 2011 a blogger named Zakariya Rashid Hassan was arrested for "inciting hatred, disseminating false news, promoting sectarianism and calling for the regime’s overthrow in online forums" and six days later died in custody. A significant number of other editors and journalists have been detained, threatened, deported and imprisoned in Bahrain, the effect of a hostile government and a corrupt court system. Meanwhile, pro-democracy protests continue in Bahrain, and activists continue to be jailed, especially those who use social media like Twitter to spread news and information.

On Tuesday a blogger was shot and killed for filming a protest.

Some wouldn't consider Burma appropriate for this list because of recent forward steps toward open media, allowing more pro-democracy publications and conversation online. However, as Reporters Without Borders puts it, the Burmese and human rights groups must remain "vigilant" to prevent a slide backward.

Burma also passed a troubling law against cyber cafes in 2011, which banned data storage devices, such as USB drives and disks, and criminalized using Skype.

Last year's revolution was organized by social media. However Tunisia's big problem, according to the Freedom House Report, is keyword censorship and arrests of users in the wake of political protests. The report details the "notable decline" in internet freedom leading up to former President Ben Ali's being deposed. However, it does not mention if the situation has gotten better since the government fell.

Reporters Without Borders, however, has moved Tunisia into the "under surveillance" category, which means it's not an "Enemy of the internet" but it could be:

"[Ammar 404, the censorship system set up by the former regime] might rise from its ashes in the wake of a series of court orders on filtering, while the status of freedom of information remains precarious."

Cyber cafes are full and mobile browsing is all the rage. According to Reporters Without Borders, the Vietnamese government is paranoid about the Arab Spring and "favors surveillance" over monitoring. For example, Facebook hasn't been blocked in Vietnam but it is surveilled. The government also launched its own version of the social networking site, reported the Wall Street Journal, but "the catch is that users have to submit their full names and government-issued identity numbers before they can access the site. Security services monitor websites in Vietnam, whose authoritarian, one-party dictatorship treats dissidents ruthlessly."

Also, webmasters and editors are responsible for comments posted on their sites, including those that are critical of the government, which has resulted in disabled comment systems. Vietnam's government also has control of the connectivity for the whole country, despite independent ISPs that sell connections to homes and businesses.

Going through these reports, there were some surprises, however.

Zimbabwe, for instance, falls pretty well into the "free, but monitored" category. Although internet use isn't widespread in the country, and most people use mobile phones (nearly 50 percent of the population has an internet-ready cell phone), the Mugabe government hasn't yet began filtering the internet, despite the historical lack of a free flow of information in that country.

Estonia is the most free of all the countries monitored by Freedom House, although some censorship still exists. Of the former Soviet countries, when compared to the likes of Poland or Hungary, Estonia looks like a great place to be in terms of internet freedom.

For a Middle Eastern monarchy, Jordan does well, falling almost exactly in the middle of the pack with a lower (more free) score than Turkey, a democratic country. Still, Jordan landed itself on the list of Countries at Risk because of an ambiguous cyber crimes law that was passed in 2010. The Freedom House report says, "Many bloggers and web users have expressed concern that the government could exploit the ambiguous definitions for each of these categories and use the law selectively to silence its critics."