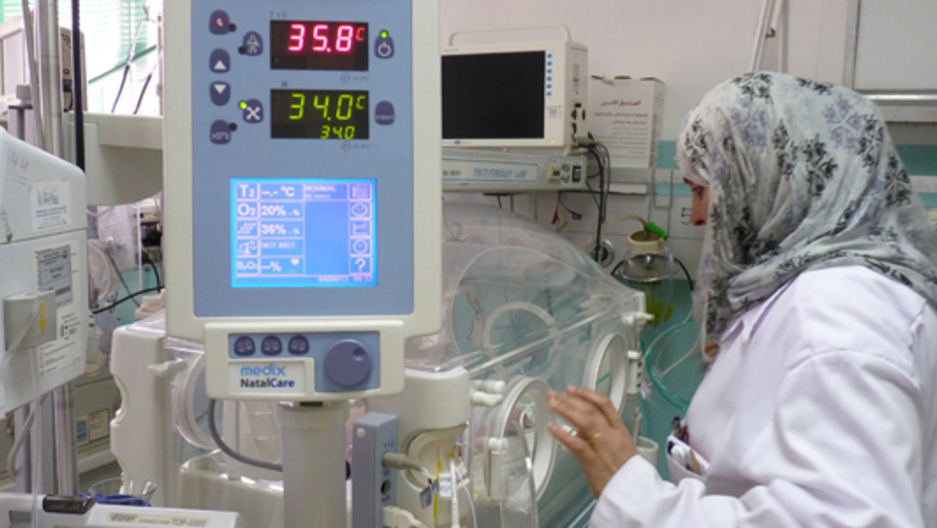 The intensive care unit for infants at Al-Shifa Hospital in Gaza City has been relying on power from diesel generators for up to 18 hours every day for weeks. There is no backup system. Doctors say it's no way to run a hospital. (Photo: Hamada Abu Qammar)

Share
It's morning rush hour. And a line of cars, taxis and trucks outside of a Gaza City gas station stretches down the street, block after block. Drivers turn off their vehicles, stand outside and wait. In front of the station, people with big plastic fuel jugs jostle for a position in line. Hamas security men — with beards, navy blue jackets and AK-47s — stand guard, in case tempers flare. Standing next to a diesel pump — smoking a cigarette — a station attendant says the men with guns are here to keep things organized. This is a real crisis, he says. There just isn't enough fuel in Gaza to meet the demand. "We have seen crisis before, but this time, it takes long time," one of the men said. "Almost more than three months." A few cars down the line, a taxi driver who gives his name as Abu Mohammad says things are bad. "First of all, it is definitely affecting our life, our kids, our family," Mohammad said. "I spent five, six hours queuing and at the end, when I reach the cue, they say there is not enough fuel. Yesterday, I was looking at 5 petrol stations. I didn't find fuel. So, it is affecting our life. Matthew Bell: "How long did you have to wait this morning? Mohammad: "Three o'clock in the morning I was staying here." One reason for Gaza's fuel shortage is in Egypt. Over the past couple of years, cheap Egyptian diesel and gasoline flowed into Gaza illegally through tunnels in the south. But Egypt has its own fuel shortage. So authorities there have been cracking down on fuel smuggling. And because Gaza's only power plant runs on diesel, the fuel crisis has spread beyond the pump to the electrical grid. For weeks now, power has been out for 18 hours a day across the Gaza Strip. In the infants' intensive care unit at al-Shifa Hospital, diesel generators fill the gap, powering the modern machines during the blackouts. If the generators run out of fuel, the 13 babies here would not last very long. As a precaution, the International Committee of the Red Cross this week started transferring emergency fuel supplies to Gaza hospitals. Doctor Hanan al-Wadiya says life in Gaza for most of its 1.7 million people amounts to going from one crisis to the next. "Not our fault. We don't know. But we always, always, always we pray to the God," al-Wadiya said. "It's what we do. Pray. God help us, not the world. We didn't depend on the world, on the Arab, or on our government, or government in Ramallah, or Israeli. We all depend on Allah." But Gaza's power crisis is about money and politics. Hamas officials have blamed the West Bank PA — Palestinian Authority that is — for being stingy with fuel and greedy for tax revenue. The Fatah-controlled PA says Hamas wants fuel, but doesn't always want to pay for it. Khalil Abu Shammala, a human rights activist in Gaza City, says ultimately, Israel is responsible for the humanitarian situation in Gaza because it still controls the borders. But the rulers of Gaza, Abu Shammala says, have failed to live up to their responsibilities as well. "I cannot listen or accept any justification from Hamas," Shammala said. "Hamas is responsible. You control everything. You collect money and taxes. You should say to the people that, 'we are ready to provide you the services opposite of these taxes." A spokesman for Hamas told me Gaza's rulers are suffering alongside their people. And he said the majority of the population still supports Hamas. On Tuesday Egypt finally brokered an agreement between the two sides and Israel, which still controls most movement of goods in and out of the Gaza Strip. Hamas transferred money for a day or two worth of fuel. The PA used the funds to buy fuel from Israel. And then it was shipped to the Gaza Strip on Wednesday. If the arrangement can be sustained, it could hugely improve people's quality of life in Gaza. If not, the next crisis is right around the corner.