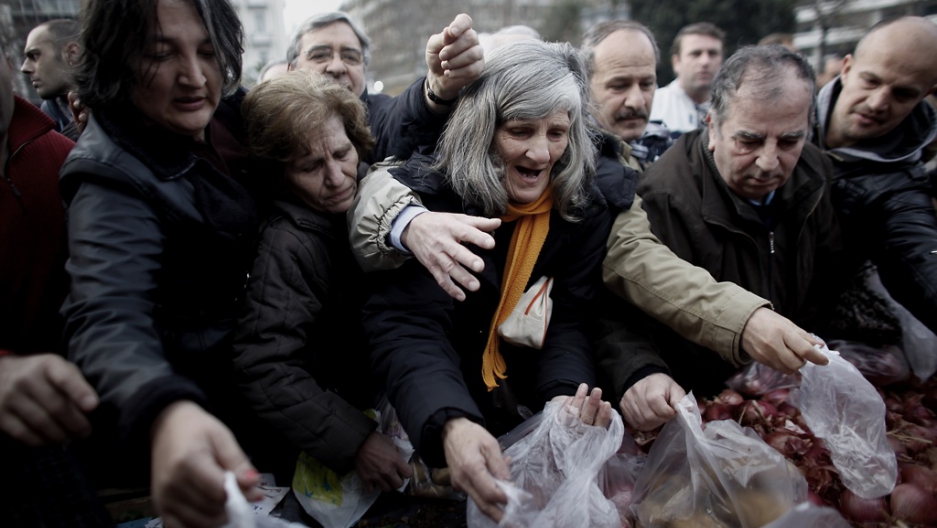 People grab free produce distributed by farmers on January 25, 2012 in Athens. Jurre Hermans, a eleven-year-old boy from the Netherlands, uses food as a metaphor for his solution to the crisis. His proposal received honorable mention for the Wolfson Economics Prize.
Credit: Angelos Tzortzinis
Share

Today the finalists for the Wolfson Economics Prize were announced.

This year, the prize is offering £250,000 to whoever has the best idea for an orderly breakup of the Euro.

The finalists are all here:

a) Catherine Dobbs - The NEWNEY approach to unscrambling the Euro

b) Roger Bootle - Leaving the euro: A practical guide

c) Jonathan Tepper - A Primer on the Euro Breakup: Default, Exit and Devaluation as the Optimal Solution

e) Neil Record - If member states leave the Economic and Monetary Union, what is the best way for the economic process to be managed to provide the soundest foundation for the future growth and prosperity of the current membership?

All the papers certainly make for good reading on the issue.

There was also an honorable mention to 11-year-old Jurre Hermans of the Netherlands.

You can download his idea here, but here's his explanation.

And we have to say, it's actually kind of tyrannical from the mind of an 11-year-old boy:

Greece should leave the Euro. How do you do that?

All Greek people should bring their Euro to the bank. They put it in an exchange machine (see left on my picture). You see, the Greek guy does not look happy!!  The Greek man gets back Greek Drachme from the bank, their old currency.

Now here comes the clever part of my idea:

The Greek people do not want to exchange their Euro's for Drachmes because they know that this Drachme will lose its value dramatically. They try to keep or hide their Euro's. They know that if they wait a while they will get more Drachmes.

So if a Greek man tries to keep his Euros(or bring his euros to a bank in an other country like Holland orn Germany)  and it is discovered, he gets a penalty just as high or double as the whole amount in euros he tried to hide!!!

In this way I ensure that all Greeks bring their euros to a greek bank and so the greek government can pay back all the debts.

Of course if a country has paid back all his debts, he can return to the eurozone.

A bit more about myself: I am 10, love animals since I have a dog and a bird. I live in a family of 5 in Holland. I have 5 friends with whom I play all day, mostly outside.

PS: My father helped me with my English translation as I speak Dutch

Here's the visual he designed to go with his idea: As for the "serious" entries above, check out the one from Jens Nordvig and Nick Firoozye, which was originally a Nomura research report. It's excellent.

UPDATE: Hermans' 'solution' is going viral. The Guardian has just written about him. So has The Telegraph. So has WSJ. Everyone is talking about Jurre!

An 11-Year Old Boy Came Out With A Tyrannical Solution For Greece, And It Involves A Giant Pizza

ON THE HOT SEAT: 10 Tech CEOs Who Could Be Fired Tomorrow

Did A Tweet By Bill Gross Just Affect The Fortunes Of An Entire Nation?

This One iPad Rumor Just Won't Go Away