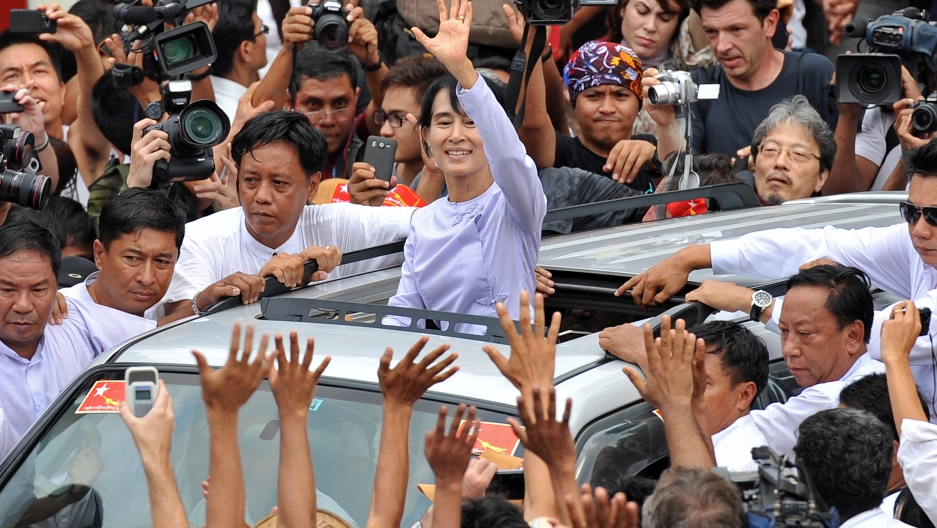 Myanmar opposition leader Aung San Suu Kyi (C) waves to the crowd as she leaves National League for Democracy (NLD) headquarters after addressing journalists and supporters in Yangon on April 2, 2012. Suu Kyi hailed a 'new era' for Myanmar and called for a show of political unity after her party claimed a major victory in landmark by-elections.
Credit: CHRISTOPHE ARCHAMBAULT
Share

YANGON — On election day in Myanmar, the music blasts in downtown Yangon.

Rappers riff on Burmese politics and the crowd sings and shouts the chorus: “Stand up Myanmar, Myanmar stand up!”

In front of National League for Democracy headquarters, traffic crawls by a sea of people waving red NLD flags. The crowd roars when the numbers show up on the JumboTron. By evening it seems certain: the NLD has won by a landslide.

After years of house arrest and humiliation, after surviving an attempt to kill her, NLD leader Aung San Suu Kyi will take a seat in Parliament.

The day after the election, in one of the big hotels where dignitaries stay, the lobby buzzes. People mill about and call to each other. That man over there used to head the UN mission here, an acquaintance tells me. The one in the blue longyi works closely with Aung San Suu Kyi. I hear the man say that he’s not excited by the election results because he expected the victory. The NLD has apparently won 43 of the 44 seats in which its candidates ran against those from the military’s proxy party. But this was only a by-election to fill a few vacancies; the opposition will control only a fraction of the more than 600 seats in Parliament.

For now, someone says, it’s better that the NLD won’t control Parliament, as they won’t have to form a government from scratch.

This will be a starting point, a testing of the waters, he says. My acquaintance has lived in Yangon for several years and he seems to know nearly everyone who walks by. In a place in which the limits of free speech and of the press remain murky, many of those who drop by have strategic reasons not to speak on the record to a journalist. So I just listen.

A visiting academic speculates about how Aung San Suu Kyi will use her influence. Will she lead a united opposition front? Or will she encourage conciliation as well as pressure for change? He thinks that shifting coalitions would be more productive than a binary split between the military-controlled government and the opposition parties, Parliament and the cabinet should start by alleviating poverty and developing the economy and contend later with reforming the constitution, which reserves a quarter of the seats for the military.

More from GlobalPost: Myanmar: What's in a name?

Admittedly the election was not flawless, says a man who has spent the previous day visiting polling places. There were some tricks played early in the day. Some ballots were coated with wax to prevent voters from ticking off their choices, according to reports on Facebook and on the independent news site, Mizzima. But somebody must have sent down the word from on high, says the man: after a few complaints of violations, township officials at the polling stations ran things more or less according to international standards for elections.

But there’s still reason to worry: the final count isn’t in. Not officially. Could something go wrong? In 2010, when the election was stolen, the theft was apparent by day two, recalls one man. And this time, day two has passed without a crisis. Nonetheless, another NLD insider says he’s feeling anxious. He can’t imagine how it could have gone better. But he has an intuition. He can’t relax. He can’t explain why.

People are coming back to Myanmar — prominent families. Former political prisoners have returned, perhaps 100, someone says. Other ex-prisoners remain in Thailand, and they warn that those returning are risking their necks. But it will be better for Myanmar and for Thailand, too, if people return gradually, someone points out. Two to three million Burmese live in Thailand, mostly without documents. Some are refugees in camps, but most are migrant workers crucial to Thailand’s economy, Burmese trying to escape poverty or civil war, or both.

More GlobalPost Commentary: The Falklands War and other global gaffes

The consensus in the hotel lobby is that the military has a plan for transition, a detailed plan. The softening of repression is all about getting free of the long-standing economic sanctions imposed in response to human rights abuses. Yes, there are hard-liners, but President U Thein Sein has prevailed, so far. Daw Suu Kyi has told reporters that she can work with him. Lifting the sanctions would suggest western support for his reforms.

But surely the hard-liners can’t have simply slinked away — people brutal enough to order that protesters be shot at in 2007? Including monks?

There’s word that the government and the rebel Karen Liberation Army will sign a peace accord within days, perhaps ending a horrific civil war that began during the Kennedy administration. On the other hand, the Kachin have picked up their rifles again after years of peace. Even after the government halted a Chinese dam project there, against all expectation, they seem intransigent.

The palm trees in the hotel garden disappear in the darkness. Time for dinner. In a restaurant down the block, the waiter brings water to my table. Suddenly the lights go out. Everyone in the room sits silently, waiting for the hum of the generator.

Cathy Shufro is reporting from Myanmar on a fellowship from the International Reporting Project, an independent journalism program based in Washington, D.C.