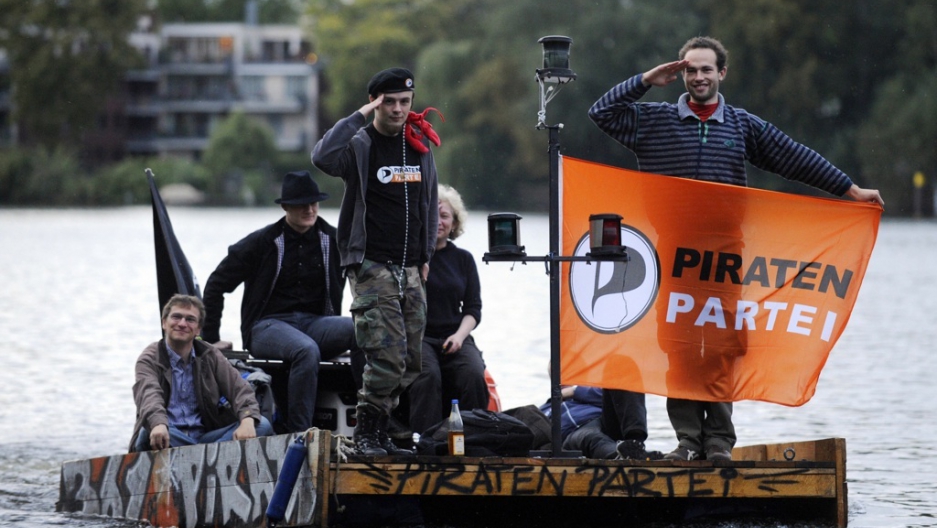 Members of the German Pirate Party sail on the River Spree during a 'campaign rally' in Berlin on September 25, 2009, two days ahead of parliamentary elections
Credit: John MacDougall
Share

BERLIN, Germany — When the band of internet activists known as the Pirate Party came from nowhere last September to win close to 9 percent in Berlin’s state election, there was still a sense that this could be a flash in the pan.

After all, Berlin was a city-state, known for its anti-establishment bent, and full of young techies working in the city’s burgeoning start-up scene, as well as students, artists and other bohemian types.

However, the success of the Pirates in Saarland last weekend has sharpened many minds in the established political parties. The Pirates were able to win 7.4 percent of the vote in the small state of 1 million people that borders France. They scored far ahead of the Free Democrats, the junior partner in Angela Merkel’s coalition, which only garnered 1.2 percent. They also pushed the Greens into fifth place.

More from GlobalPost: How Germany's Pirate Party got its start

Political commentators and party strategists are now acknowledging that the Pirates could be on their way to becoming an important political force in Germany.

It’s still unclear whether the party will shake up the political landscape by entering the federal parliament in elections scheduled for the end of 2013 — or fade away once the novelty wears off.

According to the recent polls, the Pirate Party currently has around 12 percent support nationally, which would be more than enough to clear the all-important 5 percent hurdle to enter the Bundestag.

However, critics say that one of the party's weaknesses is that its platform is still notably flimsy. There are massive gaps in substance. Issues like foreign policy, labor issues and energy are barely addressed.

Of course it is still early days for the party, which formed in 2006 as an offshoot of Sweden’s Pirate Party. It had originally concentrated on issues surrounding data protection, online privacy, file sharing and censorship. Since then, it has expanded its repertoire to include calls for participative democracy and transparency in politics. Other demands include free public transport and a basic minimum income.

Yet when other parties attack the Pirates for a lack of policies, they often miss the reasons for much of the party’s support. The Pirate’s “Liquid Feedback” program allows members to influence politics from the bottom up, by voting on proposals. As such, the party’s program is a work in progress. Yet it is this approach to democracy, rather than the content of the policies themselves, that attracts supporters.

In many ways their chaotic, almost amateur approach to politics that backers see as a breath of fresh air, stands in contrast to the overly stage-managed style of modern politics. And they have an all-important advantage, particularly among younger voters, that they are seen as cool, something helped by their imaginative, often irreverent posters and stickers. In the Saarland vote, 22 percent of voters aged 18 to 24 voted for the Pirates.

Furthermore, many voters have backed the Pirates largely out of disillusionment with conventional politics.

“Most Pirate voters are unsatisfied with the whole situation — with the parties and with politics in general — in a very undifferentiated way,” says Carsten Koschmieder, a political scientist at the Free University in Berlin.

He argues that those backing the party specifically because of their internet policies or their stance on copyright issues form a minority.

In fact, 85 percent of those who voted for the Pirates in Saarland said that they did so out of frustration with the other parties. And the Pirates gained votes from across the political spectrum, as well as from many who normally don’t vote at all.

Other parties are now rushing to push internet and data issues up their agenda. In doing so, they may miss the point.

“The parties are trying to incorporate some of the Pirate’s program. The problem is that this naturally doesn’t help when it comes to voters who did not choose the Pirates because of their policies.”

Whatever the motivation for voters, it is clear that the Pirates are, for now at least, ascendent. Polls are showing that they have a good chance of entering parliaments in the state elections in Schleswig Holstein and North Rhine-Westphalia in May.

This year’s unexpected string of elections — called after the early collapse of a number of regional governments — have given vital oxygen to the Pirates.

“If there had been no elections this year, then the media hype surrounding the Pirates would likely have run its course, and the Pirates would have been forgotten again,” Koschmieder said. “However the fact that the momentum from the Berlin election has now continued with this new election to a state parliament, means that they will very likely succeed in the next two state elections.”

In particular, if they gain seats in North Rhine-Westphalia — the country’s most populous state with 18 million inhabitants and long considered a bellwether for national elections — then they will be regarded as having extremely strong prospects for entering the federal parliament.

If they do so, the political ramifications may be significant. There would be six parties in the Bundestag, making it all the harder to cobble together traditional coalitions on the left or right.

The Pirates have already said that they have ambitions to play a role on the national stage. “Naturally we will be entering the election in 2013 in order to potentially work in a federal government,” deputy leader Bernd Schloemer told the Hamburger Abendblatt newspaper. “We want to form policies in governments in the longterm and not be described as a protest party.”

And what is certain is that after the last two successes, the established parties, which had underestimated the new party, are now taking them much more seriously, both as a threat and even as a potential partner.

One point of confusion in dealing with the upstarts is where exactly on the political spectrum the party is located.

While it has some left-wing tendencies, it also contains elements of classic “liberalism,” in the sense of advocating freedom, privacy and less government control. These issues had traditionally been the domain of the pro-business Free Democrats, though in recent years they neglected them in favor of concentrating on free-market liberalism and tax cuts.

Meanwhile, the opposition Social Democratic Party have already indicated that they are open to at least exploring common ground. “In the medium-term, we have to get used to the fact that they exist,” said Social Democratic Party general secretary Andrea Nahles this week. She said she could envisage entering talks with the Pirates, in a “relaxed” way. “I don’t however yet foresee coalition negotiations.”

Nevertheless, with some 18 months to go until the next federal election, analysts warn that the Pirates could still run aground.

For a start, they can only act as political neophytes for so long. Eventually they are going to have to perform politically and that brings new risks.

“There is the danger of disenchantment in the harsh daily grind of politics,” says Volker Kronenberg, professor of political science at Bonn University. “These new participatory structures, all sound very exciting and positive. However, they will have to prove themselves in the routine parliamentary work, and that will be the acid test.”

That would be a delicate balancing act. They have to convince voters of some competence, while not losing those who back them out of protest.

And when it comes to the federal election, the party will be expected to finally take a stand on many issues, such as foreign policy and security.

“They can’t still be claiming that they simply don’t know yet when it comes to the federal election campaign,” Koschmeider said. “And once they make commitments on certain issues, they will no longer be so attractive as a protest party.”

Furthermore, while voters are usually happy to experiment in regional elections, they are often more conservative in national votes, sticking with the more established parties, which could also affect the Pirates’ chances in 2013.