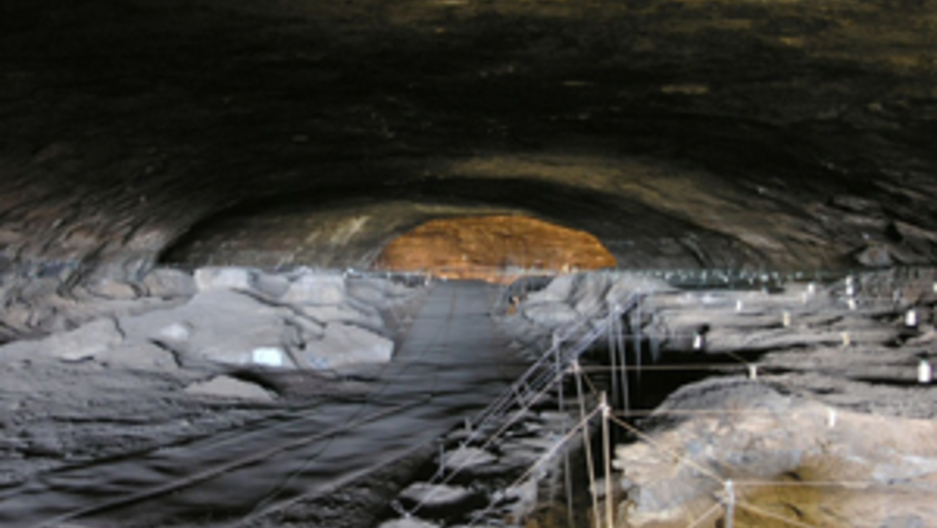 At Wonderwerk Cave in South Africa, scientists have found evidence of human ancestors using fire about a million years ago. (Photo by M. Chazan.)

Our ancestors used fire to ward off predators, provide warmth and cook food. But exactly when they started doing this is a matter of debate.

A new study by an international team of scientists provides strong evidence that humans were using fire as far back as a million years ago. And that finding supports a provocative theory about the role cooking may have played in human evolution.

The theory was proposed by Richard Wrangham, an anthropologist at Harvard University and the author of the 2009 book, "Catching Fire: How Cooking Made us Human." Wrangham said fire and cooked food shaped not just human culture, but human bodies. Take for exampIe, the size of the human gut.

"Our intestines are simply about two thirds or less of the size that they would be in a great ape," Wrangham said.

He said we evolved smaller guts than other apes because we digest cooked food, which takes less work than digesting raw food. We also have smaller teeth than our primate cousins.

The species first evolved nearly two million years ago. But strong archaeological evidence of the use of fire went back only 400,000 years. Until now, that is.

The new study published on Monday in the Proceedings of the National Academy of Sciences also suggests fire may have been used by Homo erectus. The evidence comes from million year-old remains in Wonderwerk cave in South Africa.

“Here you have the bones, one million years old bones, that are gray because of the heat (of a fire),” Berna said.

“With infrared spectroscopy, the transformation of bone mineral that occurs when it is heated above generally 400 to 500 degrees, shows up very well, and unequivocally,” he said.

Berna also found evidence of heating in the sediments in that part of the cave.

“What you’ll see is white patches of stuff, which are pieces of the ashes,” he said.

Goldberg doesn’t believe that the ashes came from a wildfire, because they were too deep inside the cave. The ashes and bones were also associated with stone tools. And these were all found through several vertical layers, suggesting repeated fires.

The results don’t prove our ancestors were cooking their food a million years ago. After all, they could have dumped the bones in the fire after eating raw meat. But Wrangham said the study does offer the first conclusive evidence that human ancestors were controlling fire back then.

"For me, that is very significant because once you control fire, I think it would be only a very short time before cooking became regular practice," Wrangham said.

Wrangham said the study also shows the value of this kind of microscopic analysis to find evidence of ancient fires. He hopes scientists will use the technique at other sites where early humans were known to live.