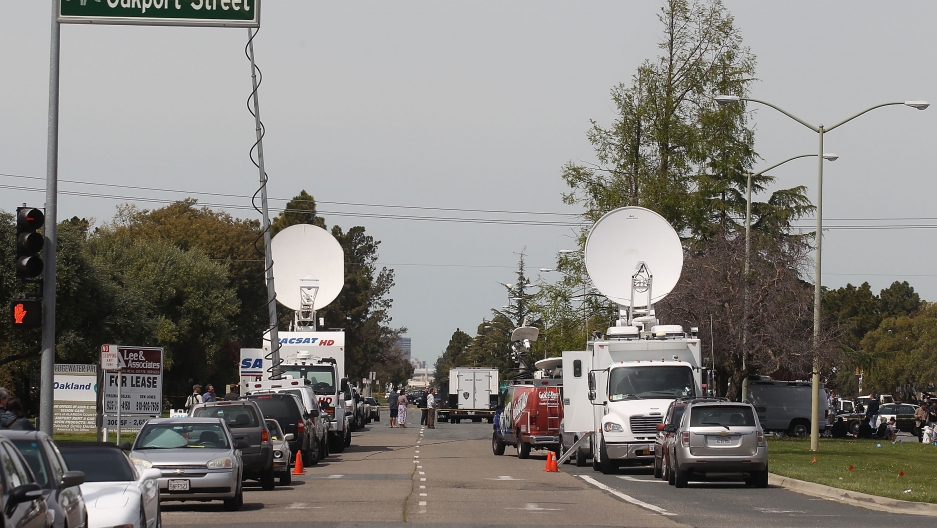 News media congregate at the scene at Oikos University after a shooting that killed multiple people on April 2, 2012 in Oakland, California.
Credit: Jed Jacobsohn
Share

Police have identified the suspect in a shooting attack that killed seven at a California Christian college as a 43-year-old former nursing student One L. Goh.

Goh opened fire at Oakland's Oikos University Monday after telling old classmates, "get in line ... I'm going to kill you all," Reuters quoted Paul Singh, whose sister was one of three wounded, as saying.

The LA Times cited authorities and witnesses as saying Goh then calmly sprayed bullets around the classroom, "seemingly without discrimination."

The gunman then left the classroom and continued his attack. “Shots were fired throughout the building,” Jordan said.

Goh is a Korean national and believed to be a resident of Oakland, ABC News reported.

Police Chief Howard Jordan said Monday that Goh was in custody after surrendering at a Safeway shopping center in Alameda about an hour after the shooting.

The school's founder, Pastor Jong Kim, told the Oakland Tribune newspaper that the gunman had been a nursing student, but was no longer enrolled at the college, which has links to the Korean-American Christian community.

It appeared all the shooting victims were adults, ABC cited Jordan as saying.

"As it stands now, we are confirming that a total of 10 people were injured during this morning's shooting, seven of which are fatalities," Oakland Police Department spokeswoman Cynthia Perkins said earlier.

Events were covered live on Bay Area TV, which aired aerial shots of SWAT officers roaming the campus, which is in an industrial area near Oakland International Airport.

The video showed officers carrying wounded people out of the buildings and bodies covered by blankets.