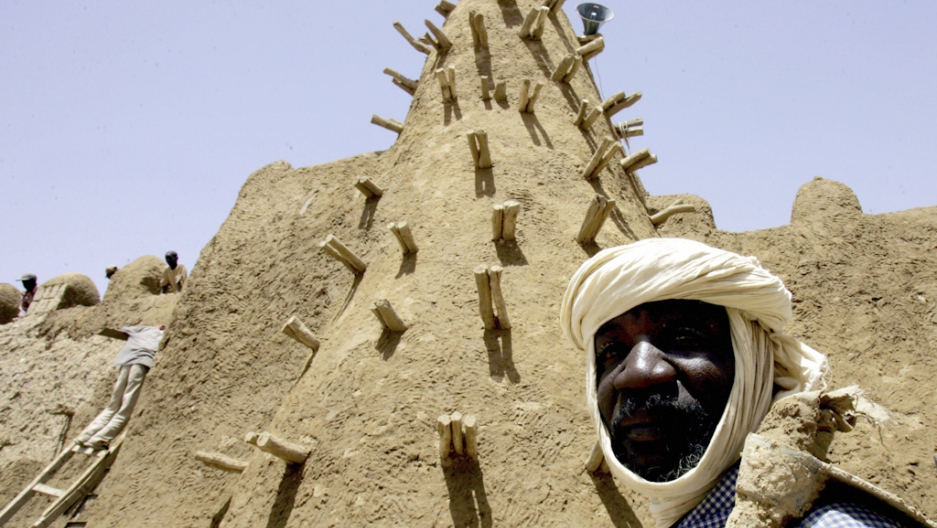 NAIROBI, Kenya — As Timbuktu is thrown into turmoil by a rebel occupation UNESCO is warning of the potential threat the fighting and looting might pose to the city's collections of ancient manuscripts. There are more than 100,000 of them and some are nearly a thousand years old. They are mostly kept in family collections and all are proof of a thriving cultural, religious, commercial and literary life in the African desert at a time when Europe was lost in the Dark Ages.

A few years ago I traveled to Timbuktu to learn about the manuscripts and then left by boat on the Niger River heading for the town of Mopti, a few days sail away. The peace and beauty of Mali then is all a depressingly far cry from the news today, so here is a story about what it was like before and what it might be again.

The turbaned curator, Abdel Kader Haidara, smiles as he pages gingerly through a small centuries-old leather-bound book, one of 9,000 he looks after in his family collection. In the baking hot streets outside swirling dust devils skitter across the dirt road throwing columns of desert sand into the air.

Among Timbuktu's greatest surviving treasures are more than 100,000 manuscripts that can be found in collections such as Haidara's or simply on shelves and in chests in family homes across the city. "The manuscripts are our heritage," he says, "they have been passed from generation to generation. They are the history of Africa, the history of mankind." Written in Arabic script on parchment, tree bark or tanned antelope skin the manuscripts date back more than 800 years. Many are decorated with illustrations and gold leaf.

They cover every conceivable topic from history and medicine to law and human rights, from astronomy and philosophy to conflict resolution and trade, from literature and poetry to a who's who of ancient kingdoms. In one display cabinet a 12th century book on Islamic law sits next to a 17th century account of the life of the prophet. There is a 13th century commentary on the Koran and an 18th century pharmacopeia, a 16th century biography of a local scholar and a 17th century meditation on military strategy.

African scholars point to the Timbuktu manuscripts as proof of a written culture that predates colonialism: While Europeans emerged blinking from the bloody Dark Ages Timbuktu was a city rich in learning and commerce. "It is often thought that there was no writing in Africa but the manuscripts prove otherwise," argues Dr Mohamed Gallah Dicko of the Ahmed Baba Institute, named after Timbuktu's leading 15th century scholar. "Before and during our colonization
there was writing."

The Mamma Haidara Manuscript Library is the largest of more than 20 private collections in Timbuktu. The wealth of learning scattered across the 900-year-old city and the surrounding desert is astounding: Only a few hundred yards down the road the Fondo Kati Library houses 7,000 manuscripts while a short walk in the other direction the Ahmed Baba Institute has a public collection of 30,000 manuscripts.

South African has funded a new library to house and protect many of these manuscripts which are constantly threatened by neglect and the destructive heat and dust of this town nestling between the vastness of the Sahara Desert and a wide northerly bend in the Niger River.

The desert sands that threaten Timbuktu's manuscripts also threaten the river: heading upriver in a long canoe towards Mopti and the capital Bamako the dunes at first reach right into the river's shallows. In Timbuktu older people talk of the time, only 40 years ago, when tributaries of the Niger reached the city — now it is a six mile drive to the point where the boats moor.

Life along the river is little changed from the days of Timbuktu's illustrious past. Villages are made of mud and thatch, people fish in the river and on market days exchange their catch for salt carried by caravans from deep in the Sahara. With their mud walls and grass roofs many of the impoverished smaller fishing villages strung along the river lie un-repaired after the rainy season subsiding like day-old sandcastles.

By contrast the larger towns declare their wealth and religious fervor with towering hand-built mud mosques, their spiky minarets reaching to the treetops where the muezzin calling the faithful to prayer five times a day.

Sunset in this part of the world is like a light being switched off but sunrise is slow, gradual although the air remains freezing cold. Wrapped in a sleeping bag on the roof of the boat the view is panoramic as the stars fade and the brush stroke clouds turn from grey-blue to shining orange. Occasionally a hippopotamus emerges to waggle its ears and snort.

Eventually the river becomes a lake, part of the Niger's huge inland delta. Local people fish by hand using long palm wood poles to punt silently through the shallow waters of Lake Débo, birds wheel and dart through the air, egrets rest on small rafts of hyacinth, herons wade at the lake's edge and kingfishers hover then plunge into the waters in search of food.

By now the desert is far behind and the landscape is greener. There are more fishing villages, grander mosques and small herds of cattle drink from the river. There is more activity on the shores with children splashing and waving, clothes like large colourful flowers laid out to dry on bushes and men everywhere repairing fishing nets and canoes. And the comes the riverside city of Mopti where the bright street lights and bustle of the port are shocking after the peaceful days and nights by river from the desert.

More from GlobalPost: Touareg versus Tuareg: What's in a name?