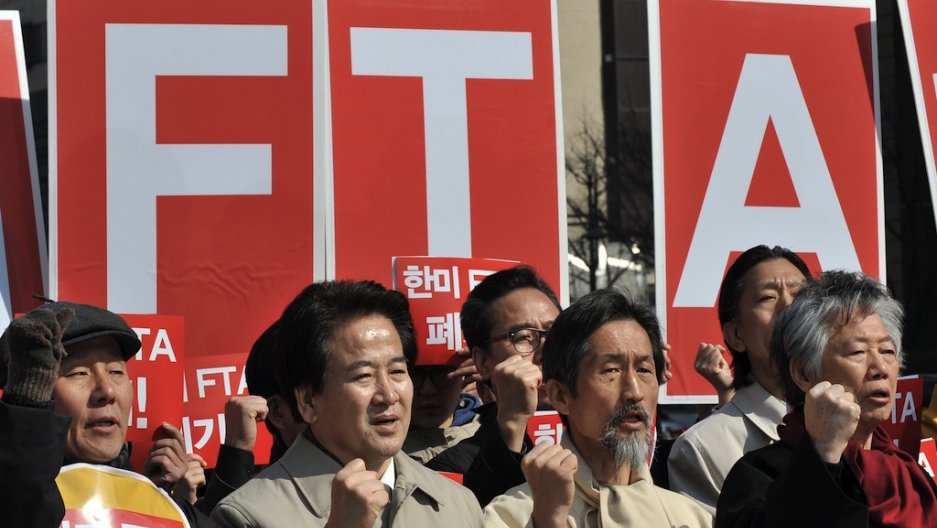 South Korea's opposition party lawmakers and activists shout slogans during a rally against a South Korea-US free trade agreement in Seoul on March 15, 2012. A long-delayed free trade agreement between the US and South Korea took effect amid praises from their leaders but also sparking scattered protests. The protestors said the agreement would only 'make the rich richer and the poor poorer,' devastate the country's weak agriculture and service industry and sacrifice most of the people only to benefit large businesses.
Credit: JUNG YEON-JE
Share

The Free Trade Agreement between Korea and the United States that went into effect on March 15 has gotten little media attention in America — but it has been the most controversial political issue of 2012 so far in South Korea.

Thousands of protesters have filled the streets criticizing the agreement, and minority party politicians have asked voters to cast their ballots against any candidate who favors the agreement. The main opposition party, the United Progressive Party, has promised to repeal the deal if elected in the general and presidential elections (set for April and November, respectively). Repealing the accord “won’t jeopardize national confidence” because under the agreement “any of the two countries could nullify the deal,” Rhyu Si Min, a leader in of the United Progressives, said in an interview with a Korean television station.

Driving the protests have been the agricultural and labor constituencies, says Scott Snyder, a Korea expert at the Council on Foreign Relations.

“They’re concerned with the investor-state provision, and concerned that the dispute mechanisms favor multinational corporations,” says Snyder. Investor-state dispute settlement mechanisms allow US investors to file grievances with Korea in the courts of a third country. The opposition argues this would work mostly in favor of the US because it has such significant influence over the international judicial system.

Those fears are not misplaced, said Arthur Stamoulis, executive director of Citizens Trade Campaign, a coalition of groups founded in 1992 to oppose the North American Free Trade Agreement. “Most existing laws are safe, but future laws—if a union wanted to improve worker safety, for example, a foreign corporation could challenge it if it affects cross-border trade or investment.” Labor-related regulations and court decisions are also open to being challenged by multinational companies under the FTA, Stamoulis said.

Korean labor concerns are further validated by the outcomes of previous US free trade agreements.

It was the first free trade agreement between the United States and a group of smaller developing economies and a provision was inserted mandating a range of worker protections from the right to free association to a guaranteed minimum wage.

In DR-CAFTA, each member country agrees to adhere to the labor principles of the International Labor Organization and its stance against child labor, unsafe working conditions, discrimination, and the like. These principles are reflected in Chapter 16 of DR-CAFTA, and it is agreed that a member nation’s failure to abide by these principals will result in severe monetary sanctions.

The International Labor Rights Forum predicted that DR-CAFTA would actually be harmful to international workers “because it lacks adequate provisions to protect and enforce workers’ rights.”

“Many supporters of this free trade agreement claim that it will bring economic development to Central American countries,” the ILRF wrote. “We believe, however, that these benefits will not reach poor laborers unless their rights are legally mandated.”

The ILRF was correct in its analysis.

After three years of studying the impact of the free trade agreement DR-CAFTA on labor rights, the Washington Office on Latin America (WOLA) published a study revealing “that labor conditions in the DR-CAFTA countries have not improved and violations have not diminished regardless of promises made by the member countries to improve labor rights and the millions of dollars invested by the United States to meet this objective.”

Eventually, even the US government agreed. Last August the Office of the United States Trade Representative announced it was requesting the establishment of an arbitration panel — an unprecedented request — to discuss the Guatemalan government’s failure to enforce its labor laws, including the right to association and collective bargaining. The US argued that “the Government of Guatemala is failing to meet its obligations…with respect to effective enforcement of Guatemalan labor laws related to the right of association, the right to organize and bargain collectively, and acceptable conditions of work.”

Guatemala countered by announcing that the US violated the labor chapter of DR-CAFTA by calling for arbitration, saying its case wasn’t strong enough.

The Guatemalan government had refused a proposed "labor action plan" put forth earlier by the US as an alternative to arbitration, reportedly because Guatemalan business interests said elements of the plan were too far-reaching.

Here’s where things get tricky. According to Luke Peterson, editor of the Investment Arbitration Reporter, “labor arbitration has been slow-tracked, after Guatemala kicked up a ruckus.” Says Peterson: “The US has agreed to try to negotiate more with Guatemala for now.” In other words, even after years of consultations on the issue, in which the US said it was not getting anywhere with the Guatemalan government with talks, the US trade office agreed to…more consultations.

Labor and human rights groups have filed over 20 complaints with governments signed to DR-CAFTA citing violations, and yet the US has agreed to act on just one. And even that has proven slow-moving and, so far, fruitless. It seems that while governments may give lip service to upholding workers’ rights in their free-trade agreements, when it comes to practice things are very different.

None of this is to say that Korea will turn out to be the disaster for workers that DR-CAFTA turned out to be. South Korea is a much wealthier nation with somewhat stronger labor laws and more robust court system than have many Central American nations. Nonetheless, the track record on free trade agreements in far from encouraging. And with FTAs with Columbia and Panama now in effect alongside Korea’s, workers around the world have a right to be worried.

L. Thomas Galloway is the president of the Galloway Family Foundation, whose focus is on international journalism and human rights and funds the Center for International Journalism. The foundation also supports GlobalPost in investigative and in-depth reporting projects.

Jordan Smith is a writer at the Center for International Journalism. His work has appeared in numerous publications across the country, including the New York Times, Washington Post and Boston Globe.