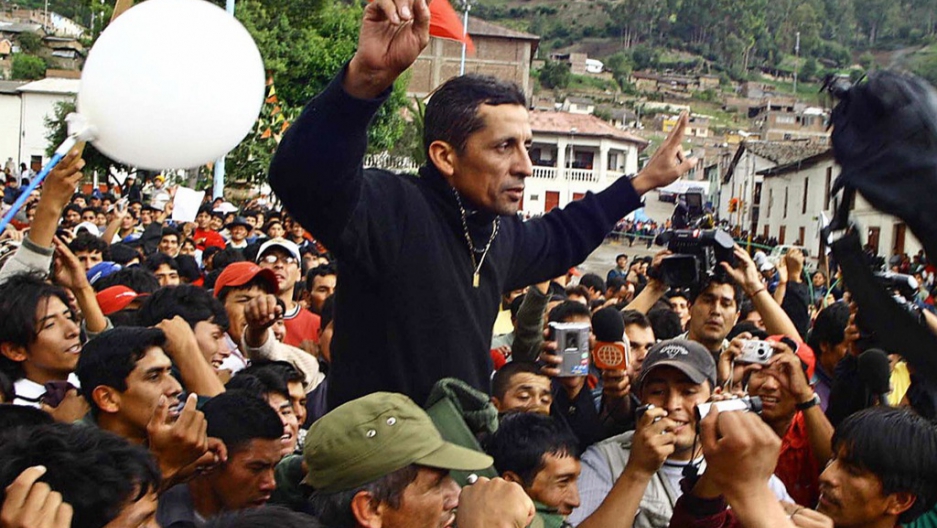 Former Army Major and Peruvian nationalist Antauro Humala, is cheered by supporters across Andahuaylas' Plaza de Armas, 03 January 2005. He is the brother of Peruvian President Ollanta Humala and seems destined to ruin him.
Credit: STR
Share

Four police officers died in the uprising, which was also supposedly intended to stop Chilean economic interests from taking over Peru.

Ever since, Antauro’s hard-left views, and his ability to turn an outrageous quote at the click of a journalist’s microphone, have simultaneously enthralled and appalled the entire country.

Yet, this month Antauro appears to have outdone himself. He has morphed from a thorn in Ollanta’s side to a major political headache that, analysts say, could undermine his brother’s presidency, just eight months into his five-year term.

The scandal revolves around Antauro’s alleged privileged conditions behind bars, as well as the influence he appears to wield from his cell.

The Peruvian media have published detailed revelations, after hacking into Antauro’s email account. These depict him: slow-dancing in his cell with his blonde girlfriend; routinely using a banned iPhone; receiving business propositions from as far afield as the US and China; and being asked to help correspondents’ relatives secure public sector jobs.

Yet the most troubling allegations come from email exchanges with Carlos Espinoza Sanchez, security official of Yanacocha, the conglomerate headed by

In the emails, Espinoza Sanchez, a retired army commander, calls on Antauro to influence promotions in the armed forces. “It is the moment to ensure key posts for trusted officers,” he writes, as he proposes the names of generals for several strategic regional commands.

In a statement confirming the authenticity of the emails, the company said: “Yanacocha has no relationship with these personal messages … and will take the relevant administrative actions after this inappropriate use of company email.”

It remains unclear whether Antauro has actually been able to impact any government decisions, or whether he has received payments for helping his various correspondents.

Nevertheless, the accusations — along with Antauro’s recent controversial transfer from the high-security Piedras Gordas prison to a secure unit at a military base, outside the jurisdiction of Peru’s prison service — have sparked a political storm.

“He has had many luxuries and a source of power, both at Piedras Gordas and today, and it is worse now because they have transferred him to the military college where he was trained,” intoned former President Toledo. “I just hope that God illuminates President Humala and he makes a decision about all this.”

Toledo’s concern is particularly significant given that he leads the Peru Possible party, whose support Ollanta’s government relies on for its congressional majority.

Meanwhile, the reaction of the Humala family has not helped the president.

The president’s father, Isaac Humala, an imposing patriarch who, by his own admission, sent his sons into the military to prepare them for power, commented: “Natural law obliges Ollanta [to help Antauro]. If he cannot provide justice for all Peruvians, then at least he can do it for his brother.”

Yet it is hardly the first time Antauro, or other members of Ollanta’s family have caused the president grief.

Peruvian TV news shows delight in repeatedly airing footage, from 2008, of Antauro overturning tables and chairs at a court hearing as police helplessly watch, apparently scared to lay hands on him.

And during last year’s presidential campaign, Antauro regularly insulted his brother and initially implied he would call on Peruvians to vote against Ollanta, although as election day loomed he eventually backed his older sibling.

“Antauro is a man who needs press, applause, a public, and who uses the fact that he is the president’s brother to get it,” warned Marisol Perez Tello, a congresswoman for the center-right Christian Peoples’ Party, in the newspaper La Republica.

The brothers were originally close, and together led an army revolt in 2000, during the dying days of Alberto Fujimori’s presidency. That government was widely viewed as illegitimate; it fell shortly afterward over vote-rigging allegations, paving the way for Ollanta and Antauro to be pardoned.

But since then, as Ollanta has steadily moderated his image, Antauro has increasingly embraced authoritarian and ultra-nationalist positions. In some of his hacked emails, he refers to himself as “Blue Pachacutec,” using the name of one of the last Inca emperors and, according to more than one commentator here, a clear sign of Antauro’s delusions of grandeur.

But the president, who has yet to visit Antauro in jail and never publicly refers to him by name, appears unable to end the rumbling scandal. His only comment so far has been: “I believe that the president of the republic, as head of state, should not speak about family matters but about issues of state.”

The problem for Ollanta is that by so far failing to take firm action against Antauro’s apparent prison privileges, his awkward brother has now mushroomed from painful family matter to a major issue of state.