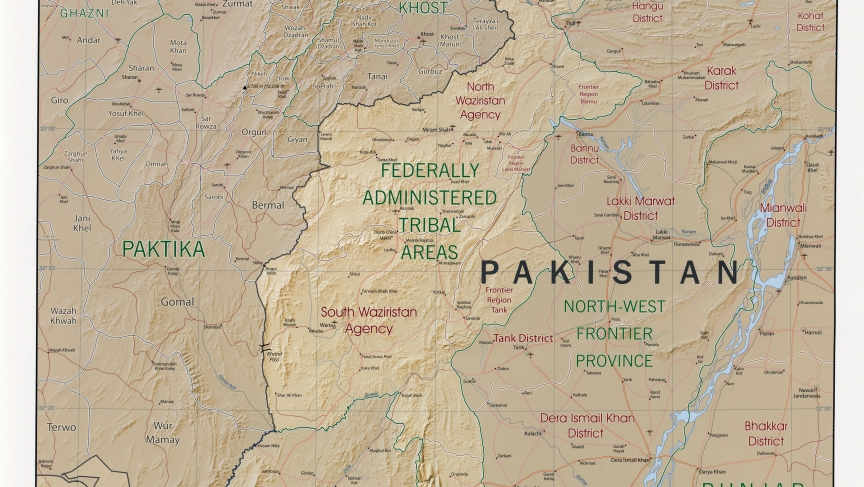 Pakistani journalism students study in the country's tribal regions, where the Taliban is strongest. (Photo by the Central Intelligence Agency via Wikimedia Commons.)

For the second year in a row, Reporters Without Borders has named Pakistan the most dangerous country in the world for journalists.

Eleven reporters were killed there last year — among the latest, 43-year-old Mukarram Khan Aatif, a highly respected veteran reporter for the Voice of America’s Pashto language radio. He was killed while he prayed at a mosque near his home.

The Pakistan Taliban claimed responsibility, saying, “We have been warning him to stop his propaganda against us in the foreign media.”

Lawrence Pintak, dean of the Edward R. Murrow College of Communication at Washington State University, is advising journalism students at four universities in Pakistan’s tribal regions, where the Taliban is strongest.

A professor at one of the universities told him, “we need to include conflict safety training in our curriculum,” because students face roadside bombs and Taliban threats while on class assignments, and professors are killed and kidnapped. Campus radio stations are visited regularly by military intelligence and numerous journalists have been threatened, beaten or killed for their work.

Even with the dangers, Pintak said journalism is flourishing in the region, with many men and women signing up for the programs.

Pintak said young Pakistanis are pursuing journalism, “because they want to have a voice. Journalism is another way for them to impact their communities and their country.”

Students have been given radio stations, in part, through USAID, which trains student journalists and act as a force to counter Mullah Radio, extremist pro-Taliban and Sharia law broadcasts.

In both urban and rural tribal areas, Pintak said access to news is thriving. There's also increased opportunities for women.

"The one difference is that the male students may go off to do an internship at a major news organizaton, and, in many cases, the familes don't want the women to leave," he said.

Female students are encouraged to do their internships in the campus radio stations if their families do not want them traveling to the cities.

“Some choose to stay quiet over the matter, but I know of at least four other journalists, some of them who work for the local media, who have also received similar threats from the Taliban,” he said.

Journalists in Pakistan face a number of obstacles and great opposition from the military, extremists and the Taliban.

According to the Express Tribune, Ashraf Khan, a leading Pakistani journalist working for the Associated Press, was recently warned by the Taliban to stop working for the  "infidel" media and to stop his "anti-Islam" activities. He received a handwritten letter from the from chief of the Taliban's Karachi organization, saying the Taliban were watching his every move. Threats like these are not uncommon for journalists in the area.

However, despite the warnings and evident danger, Pakistani journalists continue their work.

"They are giving young men and women the skills of journalism and they are trying to inculcate the ethics and legacy of journalism. At the end of the day, those ethics, that legacy, really is a 180-degree counter to what the Taliban and the other militants are trying to do through their communications medium," Pintak said.

“Pakistani journalism is incredibly vibrant, every political view point is reflected in the media. But the government itself is divided between civilian and military leadership, and journalists are in the middle of that battle too, meaning that journalists are as likely to be threatened or killed by the Taliban as they are by the Pakistani military.”

Pintak said meeting journalism professors from the region put his problems as the head of a journalism school in perspective.

“While we worry about budget cuts, they are literally putting their lives on the line for journalism education, and that’s a very inspiring thing,” he said. "They have students who are cutting up old newspapers and magazines to paste together a newspaper. They're teaching online journalism without computers. When they saw what else we could do, they couldn't suck up enough information."

Pakistan is set to have its first ever journalism awards March 28, in collaboration with the leading press clubs across the country.

The Agahi Awards will hand out accolades in 15 different categories, including business, economy, conflict, corruption, crime, education, infotainment, the connection between water, energy and food security, gender and governance.

In addition, to creating more awareness of social issues, the categories of human rights, interfaith, judiciary, media ethics, terrorism and extremism have also been included. The goal of the awards is to imporove the state of journalism in Pakistan.