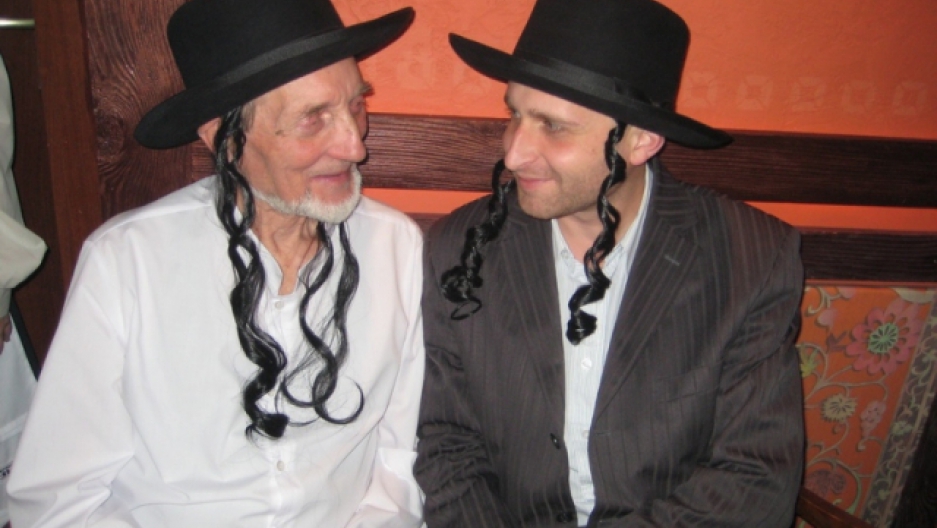 Patrons having a time at the restaurant, At the Golden Rose, in L'viv.
Credit: Yurij Nazaruk
Share

This is the third story in a five-part series exploring the rise of the far-right in eastern Europe. In part one, the political battle over an historic theater highlights growing anti-Semitism in Hungary. Part two examines the growing popularity of Svoboda, a far-right party in Ukraine. Part three visits a popular Ukranian restaurant designed to ridicule Jews. In part four, the EU considers what it can do about far-right extremism in its domain, and part five takes a broader look at the problem across the region.

What didn't survive was the city’s cosmopolitan social history, which can be read on the street signs fanning out from Rynok Square, the medieval center: Russia Street, Armenian Street, Old Hebrew's Street, Serb Street. At the start of World War II L'viv was around 55 percent Polish, a little over 30 percent Jewish and around 12 percent Ukrainian.

By the end of the war, the Poles were chased away, and 99 percent of the Jewish population of the city and surrounding countryside had been murdered. Today the city is around 90 percent Ukrainian.

Most of the money for post-Soviet renovation seems to have gone into restoring the interiors of Lviv's magnificent Baroque churches. The ceilings are covered with brightly colored religious frescoes. Their gold and silver treasures are polished and luminous. On Sundays, houses of worship are packed. Loudspeakers carry the sound of service to the crowds spilling out onto the pavement.

L'viv is a very young city, home to several universities. The town's cafes — it seems like there are more per square mile than in Vienna or Paris — are a lot more affordable and do a thriving student business. There are music clubs and plenty of places for a cheap drink, and dozens of restaurants to eat in.

As nationalist fervor steeped in anti-Semitism resurfaces, there appears to be little memory of the past, or perhaps for some, a desire to rewrite it.

"L'viv: the last city in Europe," said Yurij Nazaruk, with a laugh. "That would look good on a t-shirt."

Just 31, Nazaruk, is a marketing savant who came up with the idea of using nationalist mythology to provide themes for a chain of 15 restaurants around the city.

Just across from City Hall in Rynok Square is his restaurant Kryivka, which means “hiding place” in Ukrainian. Knock on the door and a burly man in a partisan uniform opens it. Say the password, "Glory to Ukraine," and you are escorted past walls made of logs, downstairs into a re-creation of a bunker used by partisan fighters allied to Stepan Bandera, a nationalist hero, during their ethnic-cleansing campaign.

Bandera is the hero-figure of the ultra-nationalist Svoboda, the largest political party on L'viv city council. He is a controversial figure because of his partisans' links to the Nazis and also because of their sadistic ethnic-cleansing campaign against the area's Polish population. This restaurant pays tribute to Bandera and his men. “For a long time you could not talk about them,” he said. “It was a classical form of masochism, to beat yourself up with the past. These men were heroes. They were fighting for an independent Ukraine.”

Inserted into one of the bunker's walls is a shooting range where diners can fire a pellet rifle at targets with the faces of Lenin and Stalin.

The restaurants are popular, he said, for the gimmicks, not the food. “Our policy is to educate the society,” Nazaruk said. “We try to find for each of our restaurants some theme, something they may be aware of in their history.”

Nazaruk has also opened another, more controversial restaurant named At the Golden Rose. It’s adjacent to the site of what had been L'viv's Golden Rose synagogue, a 350-year-old house of worship that was destroyed by the Nazis.

At the restaurant, patrons are given hats with sidecurls intended to mimic those worn by Orthodox Jewish men. There are no prices on the menu. Diners must haggle with the waiter over how much to pay.

Asked if he understands why this is offensive, especially since almost all of L’viv’s Jewish residents were murdered, Nazaruk shrugs.

“More Ukrainians died in the war than Jews,” he said. “Bargaining over prices? It's the truth. But you must make it positive. We're not just dealing in anti-Semitic stereotypes."

He added, "When Ukrainians come to this restaurant, they see pictures drawn by Bruno Schulz and they read about Joseph Roth. [Both Jewish, Schulz was a writer and artist, and Roth a journalist and author]. This is very positive."

”It is an insult for every Jew," said Betty Rechister, the English-speaking member of a leading family in the city's tiny Jewish community. "Jews do not go there."

Does the restaurant make her angry? "Not angry. I'm disgusted." Then she adds, "There are many worse things."

"Svoboda," she said, with a bitter laugh.