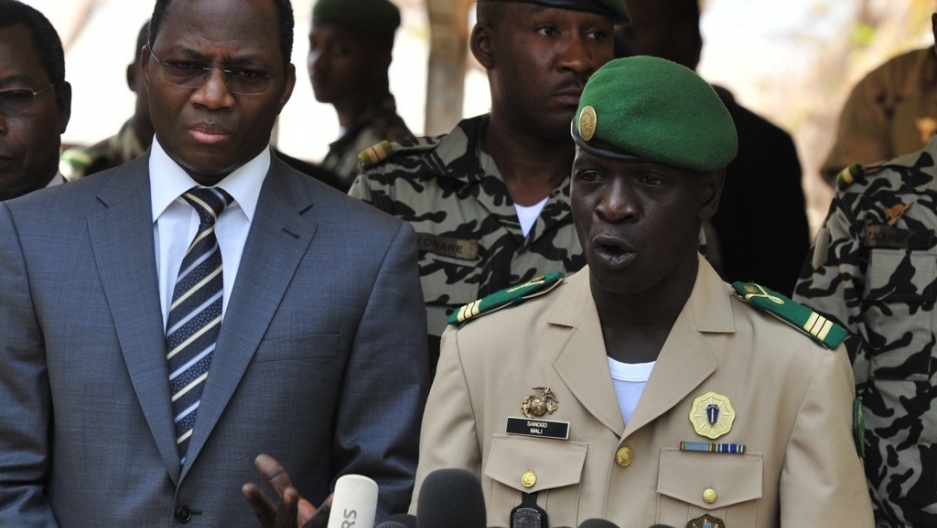 Malian junta leader captain Amadou Sanogo speaks next to Burkina Faso's Foreign Minister Djibrill Bassole during a declaration at the Kati military camp near Bamako on April 1, 2012. Sanogo announced the reinstatement of the constitution and state institutions Sunday, and promised broad consultation on a political transition.
Credit: Issouf Sanogo
Share

The young army officers revolted against the government of President Amadou Toumani Toure on March 22 because they wanted to strengthen the military's fight against the Tuareg rebels in the north.

But the confusion created by the coup has only strengthened the rebels' drive: In the past week they have taken the key northern towns of Kidal and Gao and Sunday they seized the ancient trading post and tourist center of Timbuktu.

The Mali army's response has been to flee and now their situation in the north is very weak.

Down south in the capital, Bamako, things are more stable, but only on the surface.

The city has order and gasoline and other essential goods are being sold. The streets appear orderly, according to residents. The deposed president Toure is apparently safe and is not challenging the coup leaders.

However the new military junta, led by Captain Amadou Sanogo, does not appear very sure of how to best use its power. It has taken one step forward and then one step back.

Last week Sanogo, speaking for the junta called the National Committee for the Recovery of Democracy and Restoration of the State, read out a new 69 point constitution.

But Sunday Sanogo announced that Mali would revert back to its old constitution immediately. Sanogo did this to prevent land-locked Mali from being hit by crippling border closures and sanctions by the regional power bloc, the 15-nation Economic Organization of West African States (ECOWAS).

"We make the solemn commitment to restore, from this day, the constitution of the Republic of Mali of February 25, 1992, as well as the republic's institutions," said Sanogo, reading at statement out at army barracks. The foreign minister of Burkina Faso, Djibrill Bassole, stood next to Sanogo, as the emissary from ECOWAS.

Sanogo also vowed to proceed to hold free and fair elections, in which the army would not take part.

With these measure, Sanogo has conceded to the demands of ECOWAS. But no one is certain who will stand in the elections, let alone who will win. And the other major question is what can the army do about the advances of the Tuareg rebels in the north?

It is not sure who or what the Tuareg rebels represent.

More from GlobalPost: Tuaregs: 5 things you need to know

At first it appeared they had joined up with the Islamist extremist force of Al Qaeda in the Islamic Magheb. But in the past week, the Tuareg group, the National Movement for the Liberation of Azawad (MNLA), has denounced an earlier call to impose strict Muslim Shariah law and have endorsed a secular state for Azawad, which is what they call their homeland of northern Mali, according to Time.com.

The Tuareg rebels, who some say number as few a 1,000 but others say have larger numbers when clan members are included, have access to considerable amounts of weapons, following the fall of the Libyan regime of Muammar Gaddafi. The Tuareg rebels are reportedly better equipped than the Mali army, which is why the army has suffered successive defeats.

The corruption of the Toure regime is blamed for siphoning off funds designated for the army and for sending ill-equiped and hungry forces from the south up to the harsh and unfamiliar desert territory. No wonder the army lost ground to a smaller but committed and well-armed group, writes the Economist.

Although the Toure government was generally well-liked by Western powers, corruption grew considerably. In 2002, when Toure was elected to office, Transparency International ranked Mali 77th of 182 in its Corruption Perceptions Index. But by 2011 the country had fallen to 118th. The army was particularly hit by corruption, according to reports.

Although Sanogo and the coup leaders were boosted by popular support for toppling the Toure government, they now appear to be crumbling under the weight of pressure from the regional body, ECOWAS, as well as the disapproval and suspension of aid from the United States and France.

The confusion swirls around Mali like the desert sands surrounding Timbuktu.