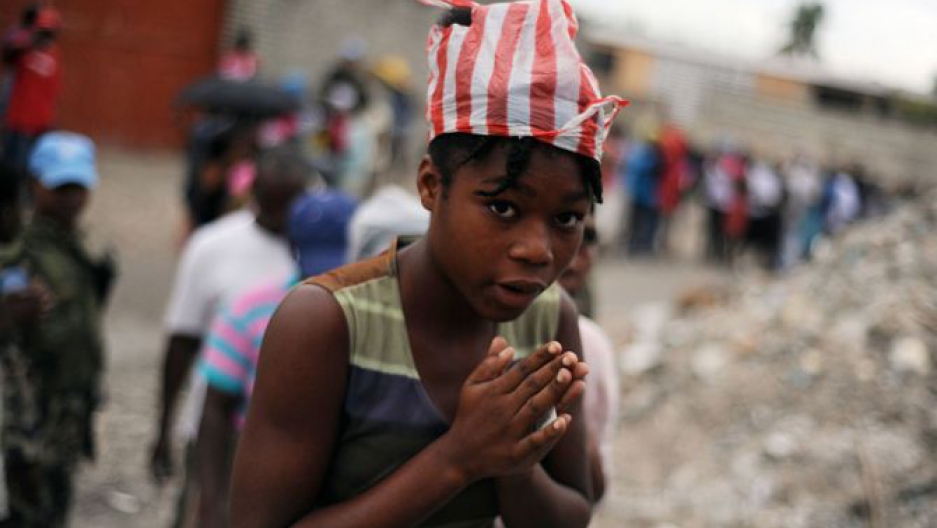 Haitian women line up in order to get sacks containing rice in Port-au-Prince on March 06, 2010.
Credit: Eitan Abramovich
Share

WASHINGTON, DC — The Farm Bill stands at the center of controversy over whether the current system of US food aid, which it authorizes, harms more than it helps, but the bill remains resistant to reform.

There was hope for change in congressional hearings spanning the months of February and March, but political observers say it has been politics as usual because the bill authorizing billions of dollars in subsidies to American farmers remains protected by agricultural lobbyists.

There is perhaps no more dramatic example of the perverse consequences that these subsidies can have than the ongoing delivery of tons of rice to Haiti.

Here’s how it works. The American rice shipped from ports in Miami is grown with the help of subsidies to American rice farmers and then donated as aid to Haiti. But when the rice arrives in the ports of Haiti it is distributed by the metric ton into the marketplace in a way that deeply undercuts the price of Haitian rice and ends up crippling Haitian rice farmers.

Citing damage done in Haiti, some groups are pushing Congress to change the way the US distributes aid in the next iteration of the Farm Bill — due to expire Sept. 30, as it does every five years — but they face opposition from a powerful lobby of special interests: shipping companies, agribusiness firms and charity organizations.

“Swift US assistance to Haiti in the aftermath of the earthquake was critical as the US military had the unique capacity to intervene on a large scale after the disaster,” Frédéric Mousseau, Policy Director of the Oakland Institute, told GlobalPost. “However, US aid to the island soon became problematic when tens of thousands of tons of US food aid were sent to Haiti at the expense of local farmers there.”

Many farmers were unable to compete with the flood of free crops, particularly rice grown and processed in the US, and they were forced out of their jobs, further depleting Haiti’s ability to grow its own staples. But two years later, as the poorest country in the hemisphere transitions from recovering to rebuilding, shipments from the US, the largest provider of international food aid, continue.

Advocates for change are not optimistic that the new Farm Bill, which has been called “the Olympics of US food and agriculture policy” in which “the federal government awards medals in the form of billion-dollar budgets that will determine what foods we eat and how we grow them,” will place more emphasis on the long-term benefits to aid recipients than it does on US interests.

"Food aid doesn't have a strong constituency in terms of change,” said Eric Munoz, a senior policy adviser at the humanitarian organization Oxfam America. “What it does have are special interests extraordinarily interested in maintaining the status quo.”

That status quo has long included the practice of dumping crops — exporting products such as rice, wheat and corn at below the cost of production — which has devastated farmers in many developing countries. The practice was in place in Haiti long before the earthquake, a fact that former President Bill Clinton, now the United Nations Special Envoy to Haiti, laments.

“The United States has followed a policy … that we rich countries that produce a lot of food should sell it to poor countries and relieve them of the burden of producing their own food, so, thank goodness, they can leap directly into the industrial era,” he said before the Senate Foreign Relations Committee two months after the earthquake hit.

“It has not worked. It may have been good for some of my farmers in Arkansas, but it has not worked. It was a mistake … I have to live every day with the consequences of the lost capacity to produce a rice crop in Haiti to feed those people, because of what I did.”

But even as the former president, who hails from the largest rice-producing state in the country, apologized for pressuring the island nation to dramatically cut tariffs on imports while he was in the White House, the US was producing, packaging and shipping tens of thousands of metric tons of rice to Haiti.

The two cornerstones of the current system of US food aid are:

In-kind food aid, in which food purchased in and shipped from the US is sold or donated to a recipient country,

Monetization, in which organizations delivering food aid sell their commodities in order to fund other development programs.

Some reformers say a more flexible system, which incorporates more locally grown food from the country or region receiving aid and offers cash or vouchers that can be used to purchase local food, would be more timely and effective without posing the same risks to markets like Haiti’s.

Others like Stephanie Mercier, former chief economist of the Senate Agriculture Committee, say even though cash aid has been proven more effective than food aid per dollar spent, a shift to cash assistance would lead to a loss of broad-based political support and could lead to corruption in aid-receiving countries.

Within the government, there are also recommendations for reform.

A 2007 Government Accountability Office report, for example, listed the “multiple challenges [that] hinder the efficiency of US food aid programs by reducing the amount, timeliness and quality of food provided,” called monetization “an inherently inefficient use of resources,” and outlined the negative market impacts that food aid can have.

But change can only come from Capitol Hill, through revisions to the Farm Bill, and many of the lawmakers who sit on the Senate and House agriculture committees represent states whose economies are built on agriculture.

Spokespeople from the Senate and House Agriculture Committees declined multiple requests for comment on their current discussions on food aid, saying it would be “premature” to discuss that aspect of the Farm Bill.

And none of the hearings held by either committee have looked at ways to address some of the main problems with the current policies in place.

Sen. Debbie Stabenow, the Senate Agriculture Committee chairwoman, hails from Michigan, where agriculture is the second largest industry, supporting one in every four jobs.

Advocates of reform say that aside from small modifications to “safe boxes” or subsidies, major change to the food aid portion of the Farm Bill is not likely.

"Because there's not an active public discussion about what alternatives exist, members of Congress may simply believe that this is the best and most appropriate way of delivering aid,” warned Munoz. "But look at donor practice across donors and you will recognize that the US in the aid it delivers is an outlier.”

Most other donor countries have moved toward more flexible programs that include cash aid, vouchers, and locally and regionally produced sources of food.

European Union donors, for example, passed a regulation in 1996 that allowed for more flexible use of the food assistance budget and restricted the use of in-kind food aid unless no other alternative existed.

Ten years later, in 2006, 97 percent of the food aid budget was used for locally and regionally procured foods, and since then the EU has maintained consistent levels of targeted emergency food aid while also reducing shipping costs.

The World Food Program, the food aid branch of the United Nations, is widely regarded as having the most expertise in determining the most efficient and effective ways to address hunger worldwide. Its International Food Aid Information System reveals that in 2010, all WFP food aid to Haiti was “local purchase.”

The same was true for France and Ireland, whereas the US purchased 3,564 metric tons locally while shipping 153,067 metric tons of food produced in the US to Haiti.

Over the past decade the US has spent an average of $2.2 billion annually on international food aid programs, both for emergency needs and development programs. The largest program is Food for Peace, which typically accounts for anywhere between 50 and 90 percent of the global food aid budget. It was first signed into law in 1954 in legislation intended to expand US exports, setting a minimum for annual food spending regardless of the needs of other countries.

Another is Food for Progress, introduced in 1985 to donate or sell and then monetize US commodities in order support agricultural development in developing countries. The 2008 Farm Bill added pilot programs in which the US Department of Agriculture and the US Agency for International Development, the two agencies that administer food aid, would support local and regional procurement with $60 million over four years.

“Procurement is done in hundreds of thousands of tons, and with these pilot projects, their procurement ability is in truckloads,” he said. “It’s hard to imagine a thousand sacks compared to several thousand tons is really impacting the overall ability to supply the food aid need.”

The 2008 Farm Bill set aside $22 million annually for the monitoring and assessment of food aid programs, partly in response to criticism that USAID did not have adequate oversight of its programs — a concern validated by GlobalPost reporting on USAID projects in Haiti since the earthquake.

It also provided a “safe box” for funding set aside for development projects, which began at $375 million for fiscal year 2009 and grew to $450 million by fiscal year 2012.

This was a victory for private voluntary organizations such as World Vision that rely on monetization and other forms of non-emergency food aid for their funding, and a defeat for the administration, which expressed concern that a safe box could get in the way of the flexibility needed to respond to emergency food needs.

“World Vision is urging Congress to ensure that $1.8 billion is appropriated over the next five years that will preserve what is called the ‘safe box.’ The safe box is funding set aside specifically for development food assistance programs, such as the Haiti MYAP [multiyear food assistance program], that address the root issues causing food insecurity,” explained Paul Macek, the organization's senior director of food security and livelihoods.

Now, as in 2008, special interests including the organizations that rely on food aid for their steady stream of funding are making the rounds on Capitol Hill.

This year, the agribusiness lobby may be more fractured than in the past, as commodity groups are likely to focus their attention on direct payment subsidies, working to protect billions of dollars a year in direct payments, which are at risk in the 2012 Farm Bill.

But moving away from a system centered on US crop exports is still a barrier for change, as it would cause some to question why food aid should continue to fall under the Farm Bill at all.

“There is a turf battle between the Agriculture Committee, which wants to keep jurisdiction over this program small as it is, and the committee on foreign affairs, where the rest of our assistance fits,” Munoz explained. "We need a real rethinking about how we deliver assistance for food insecurity … but I don't think there's a serious effort to get us there anytime soon."