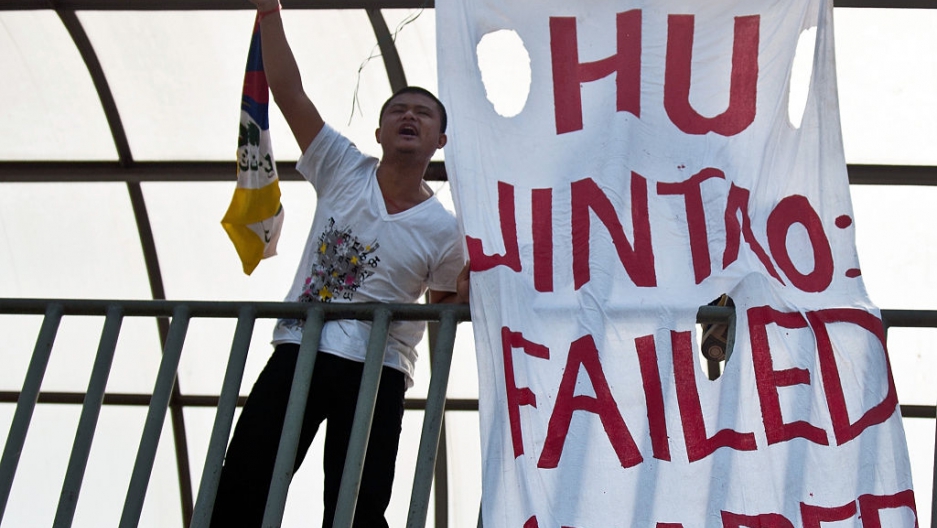 Tibetan activists unfurl a banner reading 'Hu Jintao failed leader free Tibet now' from a foot over bridge during a protest at a road leading to the Taj Hotel - the venue for the fourth BRICS Summit attended by leaders of member nations Brazil, Russia, India, China and South Africa - in New Delhi on March 29, 2012. The lead-up to the summit gathering at a luxury hotel in the centre of the Indian capital saw demonstrations by hundreds of Tibetan exiles protesting against the presence of Chinese President Hu Jintao.
Credit: MANAN VATSYAYANA
Share

NEW DELHI — India has hosted the Dalai Lama and his Tibetan followers for 53 years, but new strains between the Tibetan refugees and their hosts became evident this week with the arrest of more than 250 activists ahead of Chinese President Hu Jintao's visit to New Delhi.

The abrupt crackdown demonstrates just how precarious the Tibetans’ presence in India — now an estimated 150,000 people — has become after a long era of Indian shelter.

This was underscored Friday when Indian Prime Minister Manmohan Singh reportedly told Chinese President Hu Jintao that he “recognized Tibet as an inalienable part of Chinese territory and will not allow Tibetans to engage in anti-China activities.”

More from GlobalPost: Tibetans in turmoil, an in-deth series

Tibetans' refugee status makes life — and especially political activism — more tenuous in India than it is for refugees who have settled in Western countries. The freedom offered by citizenship in a Western country appeals to many Tibetans today, even as a strong cultural connection keeps most refugees in India.

"If everybody moved to Europe or America, then who will fight for our country?" Palden Dhondup, the secretary of the Office of Dalai Lama, asked as he signed various travel documents for refugees seeking to move away from India. Dhondup's office serves as a "defacto embassy" in Delhi.

"For the Tibetan refugee, the first aim it to migrate to USA. Every individual Tibetan thinks the US is so great," he said.

The desire to become a citizen abroad marks a change in the Tibetan community, according to Mary Beth Markey, president of the International Campaign for Tibet.

"In the first 30 years of the exile experience, I think most Tibetans hoped very much that they would go back to Tibet," she said. "They were not looking to claim any other status than Tibetan refugee."

While most Tibetan refugees live in India, thousands have sought stability in the West, where they can apply for asylum. Citizenship allows Tibetans to access education and jobs, and to obtain a passport, which gives them the right to travel to Tibet.

They also can lobby their elected officials, as 140 Tibetans did on March 20 as a part of the International Campaign for Tibet's lobby days. Among other issues, the American Tibetans asked their representatives to support a bill that would provide 3,000 visas to Tibetan refugees in India and Nepal.

In India, though, Tibetans must renew their refugee certificate, or RC, every year, Dhondup explained. "I was born and brought up in India. … Still, I'm a refugee, I'm no Indian citizen."

A Tibetan who is politically active may have problems with renewing the certificate, said Shibayan Raha, an Indian supporter of the Tibetan cause. "Since I don't have the RC issues, I can go talk about Tibet."

Other Indian activists sometimes complain that Tibetans don't support local causes, Raha added, but "they don't understand that the refugee certificate issue is a real issue."

Still, Tibetans say they are extremely grateful to India for hosting the Dalai Lama, who lives in a village in the mountains north of Delhi, and tens of thousands of Tibetan refugees. Despite pressure from China, India has allowed the Tibetan administration to function essentially as a separate government within India's borders.

As the birthplace of Buddhism, India is a natural home for Tibetans because of "the cultural, historical, ethical, religious relationship we share," Tsering added. Second only to survival, preservation of culture is a priority for Tibetans in exile, he said. "That culture is completely destroyed in Tibet."

While Tibetans express their gratitude to India, Raha isn't satisfied with his government's support of the refugees or the Tibetan cause. "Coming from a non-Tibetan perspective, I draw parallels between the Indian independence movement and the Tibetan struggle," he said, harking back to Gandhi's message of non-violence and self-reliance. But with Tibet, India's geopolitical concerns come before its ideals.

Tibetan activists in India can expect a harsher response from police than activists elsewhere, according to Tenzin Dorjee, who was born in India and moved to the US at 18. As the executive director of Students for a Free Tibet International, the 32-year-old is inspired by the endurance of young Tibetan refugees in India, who have taken up the cause in great numbers since China increased its repression in Tibet in 2008.

Despite the difficulties inside India, the essential difference between Tibetans living inside and outside Tibet is the freedom to protest, Dorjee said.

"Especially the young generation of Tibetans are really aware of this freedom, and the burden of this freedom weighs more on our shoulders," he said, just a week before a refugee set himself ablaze in Delhi and India detained Tibetans. "We have to use this freedom and use our life for those people who have died inside Tibet."