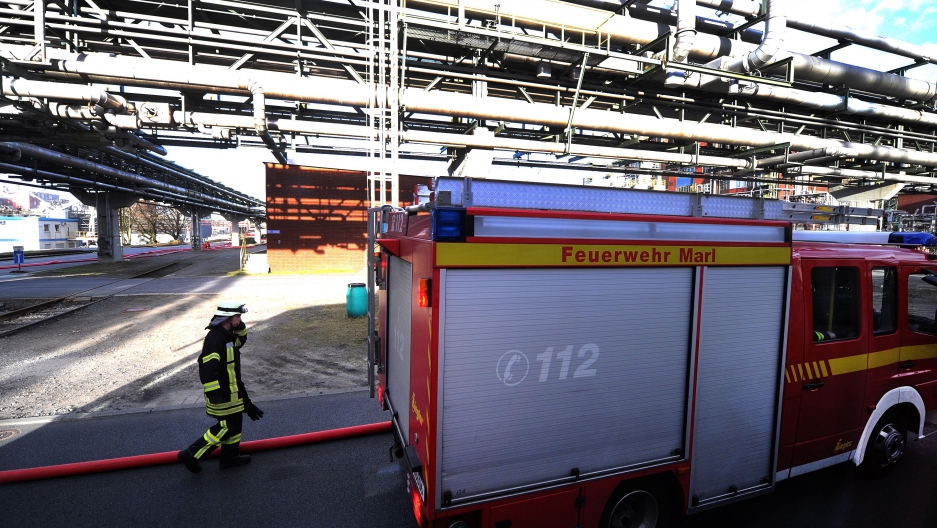 A tank exploded at the Evonik Degussa plant in the western city of Marl on Saturday and started a blaze, which about 100 firefighters managed to bring under control.
Credit: PATRIK STOLLARZ
Share

LONDON, UK – An explosion at a chemical plant in Germany killed at least one person and left two others injured Saturday.

Police spokeswoman Ramona told Bloomberg that a tank exploded at the Evonik Degussa plant in the western city of Marl and started a blaze, which about 100 firefighters managed to bring under control.

The injured man was flown to hospital, while a third person suffered only light injuries and was discharged earlier today.

More from GlobalPost: Great Pacific Garbage Patch will soon have even more garbage

Marl, a city of 87,000 in the Ruhr industrial heartland, is an important chemical industry hub. Its chemical park is among Europe’s biggest, with 30 firms employing about 10,000 workers producing more than 4,000 products.

The blast – whose cause was not immediately known – was triggered in a tank containing substances used in the production of plastic parts in the auto industry, as well as in electronics and cosmetics, an industry spokesman told the Agence France Presse.

“A column of spoke rose 100 meters high in the wake of the explosion, but initial checks by environmental authorities don’t indicate there’s any danger to health,” he added.