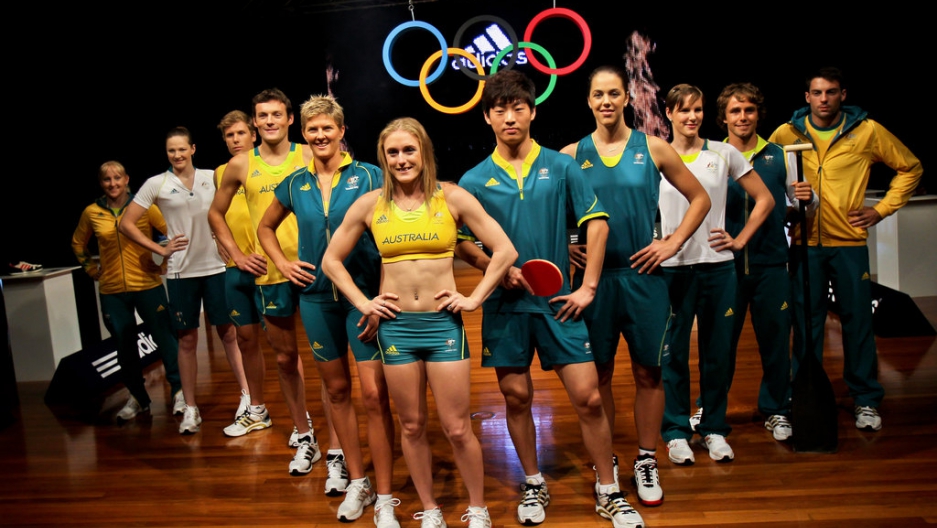 On the grand stage of the Olympic Games this year in London, star athletes will serve as high-performance models for the sportswear designs of Adidas, Nike and Puma.

Some of them, like Jamaican sprinter Usain Bolt or British marathoner Paula Radcliffe, are rewarded handsomely by the sponsoring sportswear companies to do so.

In the factories of Bangladesh where Olympic apparel is made, it's a different story, reports the UK-based human rights group War on Want.

The group, which has partnered with British labor unions for nearly 60 years, interviewed workers at six Bangladeshi factories that supply Adidas, Nike and Puma and found that five of the six don't even pay the minimum wage — already the lowest wage in the world for this type of work.

Physical and verbal abuse is reportedly common for the women, many of whom also raise families without the benefit of maternity leave or childcare considerations. Women like this comprise 85 percent of the 3.4 million garment workers in Bangladesh who produce billions of dollars in apparel for almost every major Western retail brand.

"No other sporting event offers such a positive image of capitalist enterprise in the service of a higher purpose. Yet behind the gloss and glamour, many of these same companies are failing to play fair with the very people who make their goods."

But standing up for Bangladesh's workers requires a very careful strategy, organizers say, because these workers — 85 percent of them women — cannot afford to lose the jobs they are hoping to reform. The right to protest is not respected by their employers, workers say, and attempts to unionize are regularly met with termination.

At the same time, Bangladeshi rights activist Kalpona Akter told In These Times last year, Western boycotts of brands can backfire upon workers.

“That would be suicide for us," she said, encouraging concerned people to apply pressure to the corporations who contract out to Bangladesh's factories. Akter was jailed for a month in 2010 after organizing a group to protest for better conditions in the factories where nearly 500 workers have died in fires in the past five years.

By stepping up a campaign of public protest in British cities as the July 27 opening ceremony approaches, War on Want plans to pressure the British government to establish a Commission on Business, Human Rights and Business that would give aggrieved workers a place to report cases involving UK-affiliated companies.

The group UKFeminista will demonstrate against Nike in London and Glasgow on Saturday, days after a delegation from the Bangladeshi National Garment Workers Federation (NGWF) arrived in London for an organizing conference with War on Want.

Labor rights groups in Bangladesh are carrying momentum after a recent pledge by Tommy Hilfiger owner Phillips-Van Heusen to contribute more than $1 million to improve safety standards in factories like the one where a fire killed 29 people trapped in the building without fire escapes or sprinklers. An ABC News investigation prompted the decision.