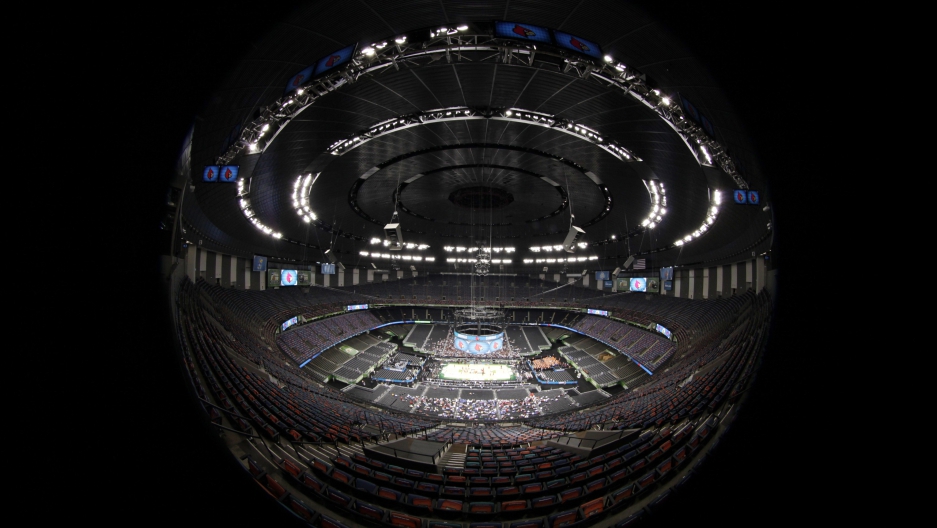 Fans watch as teams practice during the open practices before the Final Four in New Orleans at the Superdome on Friday, March 30, 2012. (Photo by Lucy Nicholson/Reuters.)

It's Final Four weekend. From Lexington, to Louisville, Ky., from Columbus, Ohio to Lawrence, Kan., basketball fever is running wild.

These four teams have appeared in 49 Final Fours and own 13 NCAA titles between them. Despite the wealth of hardware owned by all four teams, experts are saying the title is Kentucky's to lose this year — because of the depth and skill that allowed them to win all but two games they've played this season, many in convincing fashion.

But standing between Kentucky and immortality is Louisville, the Wildcats' in-state rivals. Already the competition has produced off-the-court fisticuffs, with two fans actually coming to blows inside a dialysis center.

"Basketball is a really big deal in that state," he said. "These two teams play each other every year. If they were in the same conference, this rivalry would be the same as Auburn-Alabama in football or Duke and North Carolina in basketball. It's real intense."

Kentucky won the earlier match-up this season and is heavily favored again.

But Berkowitz said the Cardinals won't be in awe of their opponent. The game between the two teams was in December was very competitive and hard fought.

"Kentucky really badly out-rebounded Louisville in the game, but Louisville was able to hang in most of the way," Berkowitz said. "No question that Kentucky, in terms of talent, is the better team. But we've seen these kinds of games in the past in the Final Four."

Berkowitz said anything, therefore, is possible. But he still thinks Kentucky wins.

"If Kentucky's playing their best game, they're the best team," he said.

The Jayhawks and the Buckeyes will also be playing a rematch from a game played earlier this year — a game the Jayhawks won, though Ohio State played without All-America forward Jared Sullinger.

Berkowtiz said he actually thinks Ohio State will have a bit of an edge on Kansas because of that earlier contest.

"The other thing that Ohio State has going for them is their point guard, Aaron Craft, who is the defensive player of the year in the Big Ten. He's really hard on other teams' point guards, and Tyshawn Taylor, who's been a terrific player for Kansas, is a player who can be really, really good for Kansas. He can also turn the ball over quite a bit. Craft is the kind of guy who could give him a hard time."

Berkowitz predicted Ohio State would win a close one.