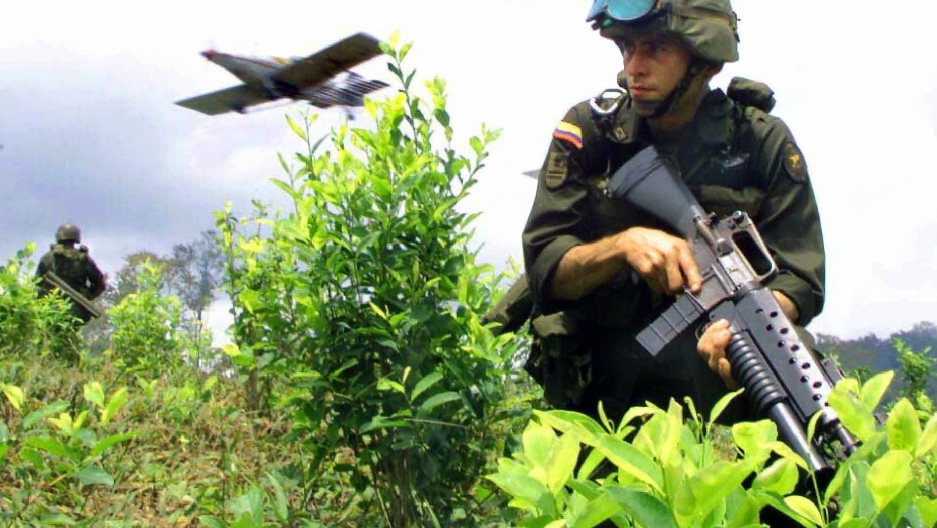 Why are we here? A Colombian soldier sits in a field of coca leaves.
Credit: LUIS ACOSTA
Share

The "legalize it" camp could be winning some key rural folks over to its side — Colombia's farmers.

Colombian lawmakers have proposed a bill that would decriminalize the cultivation of coca and marijuana plants, the BBC reports.

The theory behind the measure is that market forces would drive down the price of narcotics. This would crimp the main revenues of drug cartels, which are often more plush and better armed than the corruptible police and armies deployed in Latin America to combat them.

The reform would ease penalties on the growers, on the one hand, by removing jail terms. It would also include measures to give farmers incentives to grow legal crops.

The bill is expected to be debated in Colombia's congress in the coming days.

It comes ahead of the April 14-15 Americas summit hosted by Colombia. Drug decriminalization debate has gained momentum across the Americas in the lead-up to the summit, where leaders including Barack Obama are expected to weigh in on the most pressing issues in the region.

Liberalizing narcotics reforms could be cataclysmic for Colombia and its modern-day Pablo Escobars.

The country's narcotics industry is believed to employ 200,000 people and generate between $2.2 billion and $5 billion annually, according to this report by PBS Newshour.

Nearly a quarter of the country's 105,000 prisoners are in jail for drug-trafficking and illicit cultivation, Reuters reports. Farmers can be sentenced to four to 12 years for growing illicit crops.

But the measures also would serve a big blow to the United States, the world's No. 1 cocaine consumer, which trumpets the perceived success of its multi-billion-dollar crusade against South American coca growers and dealers.

Washington likes to cite drops in Colombia's murder rates thanks to the US-funded Colombia Plan as evidence it's winning the war on drugs. Once it loses a staunch ally such as Colombia to the legalize it camp, where would that leave the Drug Enforcement Administration?

The cards are stacked against Colombia's new bid to legalize it, for now. Colombian President Juan Manuel Santos has called for a rethink on drug policy. But according to the justice minister, cited by BBC, the reforms being proposed would violate Colombia's commitment to international anti-narcotics treaties.

Who knows if it would even work? There may be merits to this sort of supply-side approach. But what of the demand side? Colombia is a huge cocaine producer but not the only one.

For Liberal lawmaker Hugo Velasquez, who proposed the bill, the market might just work out the kinks and at least drug cartels would take a hit.

"Let's see how the laws of the market work," he told Reuters. "If there's excessive production due to the lack of criminal penalties, surely the market will depress the price."