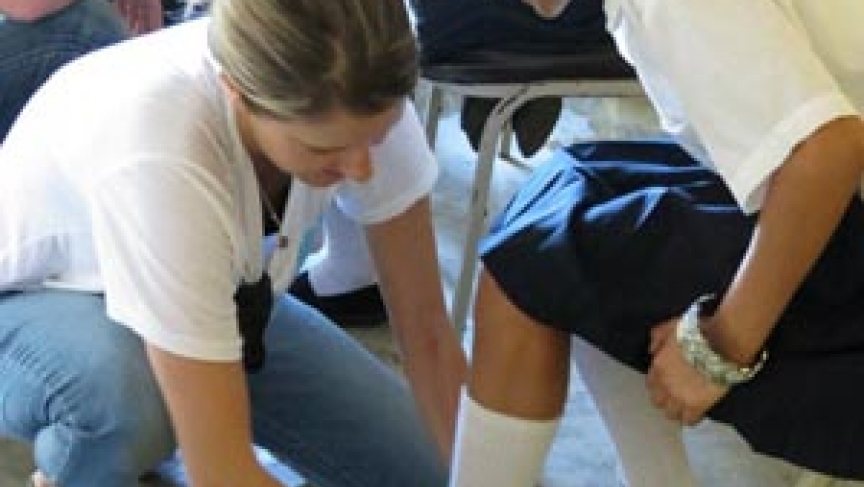 A girl in Honduras (who owned shoes) is fitted with pair of TOMS.

Some of you might be familiar with the Santa Monica-based TOMS Shoes.

The company promotes a "buy-one-give-one" business model and says it has provided millions of needy children with footwear.

The company is the subject of an investigation by reporter Amy Costello. Costello was The World's Africa correspondent for many years. She was nominated for an Emmy Award for her reporting from Darfur for the PBS television program FRONTLINE/World.

She is now anchoring a podcast called Tiny Spark - Igniting Debate About the Business of Doing Good.  She looked at TOMS in the latest installment.

We requested an interview with TOMS officials, but they declined the offer. They sent a statement expressing their disappointment that Amy Costello's investigations did not include interviews with TOMS "giving partners" or supporters.

"While we welcome all opinions and points of view, we're surprised that Amy Costello chose not to speak with, or include, any of our current Giving Partners for her segment, nor the numerous supporters of TOMS and our business model throughout the NGO and academic communities who have a more balanced assessment.

Regardless of the reporter's suggestions, TOMS is a secular company. While we are constantly trying to learn and improve our approach, we're extremely proud of what we have accomplished through the One for One model in such a short amount of time, and remain committed to giving shoes and helping give sight to people in need around the world."

The text below is a phonetic transcript of a radio story broadcast by PRI’s THE WORLD. It has been created on deadline by a contractor for PRI. The transcript is included here to facilitate internet searches for audio content. Please report any transcribing errors to theworld@pri.org. This transcript may not be in its final form, and it may be updated. Please be aware that the authoritative record of material distributed by PRI’s THE WORLD is the program audio.

Marco Werman:  Some of you might be familiar with a California based shoe company called Toms. It has a buy one give one business model - that is Toms promises to give one pair of new shoes to a needy child somewhere for every pair purchased by consumers. The company says it's given away two million pairs of shoes this way. Toms is a subject of an investigation by reporter Amy Costello.  She was The World's Africa correspondent for many years.She's now anchoring a podcast called Tiny Spark: Igniting debate about the business of doing good. Its latest installment is about Toms and how the company works.

Amy Costello:  The model is based on the idea of harnessing the power of consumers who want to do good with their purchases. So with the buy one give one model and in a case of Toms shoes for instance, if you buy a pair of their shoes they promise to give a pair to a child in need and this model has been so successful with Toms and it's inspired lots of other entrepreneurs to try similar business models. In the case of Toms shoes it is a private for profit company so details are difficult to get but if they have sold two million pairs of shoes at an average of $50.00 a pair there a $100,000,000 company at least.

Costello:  Blake has really been celebrated as quite a successful entrepreneur in recent years since he launched Toms shoes. He is, he said, 35 years old. He is often hailed as being someone who at from a very young age he'd already started several successful launches of startup companies, Toms obviously being his most successful.  And about 10 years ago he appeared as Mr. Tennessee in Fox television's America's Sexiest Bachelor. He was then in The Amazing Race with his sister, Paige. So I kind of portray a guy who's really always been after the media spotlight and is clearly really enjoying his time in the media spotlight now with Toms shoes.

Werman:  So what did you find out about who these shoes are actually going to?

Costello:  The first place I started with was Toms own website and one thing that's readily apparent is that many children who are receiving Toms shoes already have shoes of their own. You can see that in the photographs. So that raises the question for me is if there are lots of children in need why are children getting their second pair of shoes from Toms?  And I think to a lot of people that's fine and I agree. I think it's a wonderful thing if children can have more than one pair of shoes. That's not the issue for me. It's just that if they are going to be giving thousands and thousands of shoes to children who already have them then I think their marketing message needs to be a little different because then you're not really reaching the world's neediest children.

Werman:  Now you spoke with Laura Freschi. at New York University's development research institute. Here are some of her words.

Laura Freschi:  I'm concerned that Tom's sort of creates the impression that there are no shoes to be purchased inside these communities when in fact there are vibrant, local economies. In many of these places where they are giving shoes it's important to acknowledge that in some cases the buy one give one model practiced this way could be harmful to those local producers and sellers.

Werman:  Amy, you spent a lot of time looking at that the people who actually give out Toms shoes in the field. What did you find out about these giving partners?

Costello:  What I discovered after kind of hunting and pecking around Tom's own site was that they had partnered with a number of secular organizations over the years. But I immediately noticed the number of Christian evangelical organizations that Toms has partnered with. They've partnered with at least eight different evangelical organizations around the world to distribute their shoes and what I found in some instances is that some of these evangelical partners are bringing the message of Jesus during shoe distributions which is against Tom's policy.  Tom's says it's a nonpolitical, non-religious organization and that in some instances children may be receiving shoes because they go to Christian schools. I found instances in Rwanda where missionaries from Arkansas came to distribute 6000 pairs of Toms shoes and only distributed within one Christian evangelical dioceses in northern Rwanda.  They went to one school that was not in the dioceses.  So what this raises for me is the question of are children who are in need but who are not attending Christian schools, who are not affiliated with Christian organizations, also getting shoes?

Costello:  And I don't know the answer to that because it's impossible to know where all two million shoes have gone and I have repeatedly asked Toms for response to the questions that I raise in my piece. I've asked them for interviews and have been denied. So I would love some more information from Tom's about their evangelical partners and if they are ever in violation of Tom's company policy about shoe distributions, what actions are being taken, if any.

Werman:  Amy, good to speak with you. Thanks a lot.

Werman:  For more on Amy Costello's investigation into Tom's, listen to her podcast, Tiny Spark. We have a link at TheWorld.org.  We requested an interview with Toms officials.  They declined but they did send a statement expressing their disappointment that Amy Costello's investigations did not include interviews with Toms giving partners or supporters. It also noted that Toms is a secular company. The full statement is also at TheWorld.org.

Copyright ©2009 PRI’s THE WORLD. All rights reserved. No quotes from the materials contained herein may be used in any media without attribution to PRI’s THE WORLD. This transcript may not be reproduced, in whole or in part, without prior written permission. For further information, please email The World’s Permissions Coordinator at theworld@pri.org.

Editor's Note: Here is an archived version of this discussion, which took place on an older version of our website. Feel free to continue the conversation in the live comment section below.