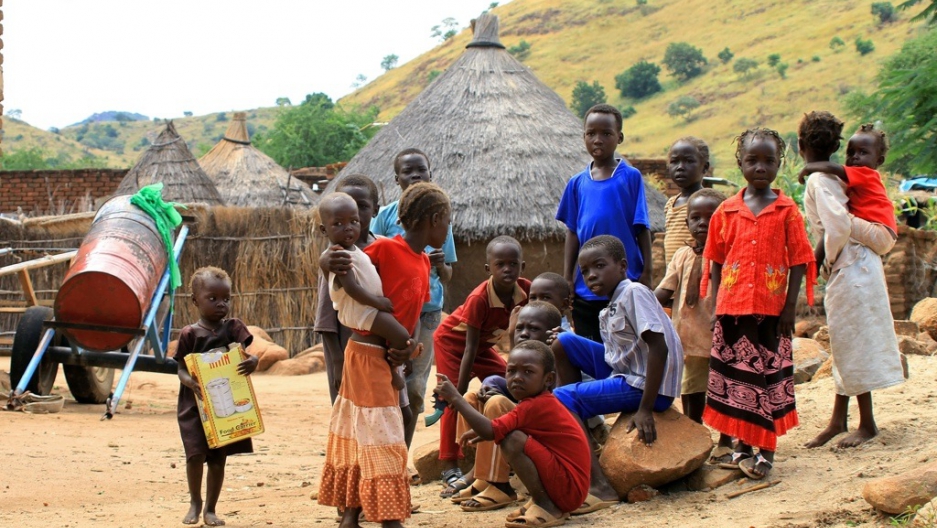 An estimated 500,000 people in Sudan's South Kordofan state are at risk of starvation if food aid is not delivered to the conflict zone. These children were in Kadugli, South Kordofan on October 21, 2011.
Credit: Ashraf Shazly
Share

TESS, Sudan — The United States and the UN are scrambling to get food to this conflict zone where an estimated 500,000 people are at risk of starvation.

But Sudanese President Omar al-Bashir’s Khartoum government is standing in their way, creating a potentially deadly impasse. Sudan is waging two wars: it is bombing rebels in its own South Kordofan state and it is also bombing parts of the new country, South Sudan.

Although a proxy war has raged for months, direct clashes between the two countries — Sudan and the new nation, South Sudan — erupted Tuesday, making it even more difficult to plan food aid deliveries. The food emergency is a classic example of a civilian population suffering as a result of battles between a government and a rebel force.

Actor George Clooney last week warned of an impending disaster for civilians caught in the crossfire. Clooney was so alarmed after visiting this area recently that he protested in front of the Sudanese embassy in Washington and was arrested.

Here in South Kordofan, the bombed out villages and cratered fields show why the rural population has not been able to grow crops.

The Arab League, African Union and the UN have urged Bashir to allow food deliveries. But the regime has so far refused, arguing that aid could be diverted to rebels of the Sudan Peoples Liberation Movement-North. The Sudanese government looks determined to continue its bombing campaign.

“In the end it’s very effective,” said Tom Catena, an American surgeon working in South Kordofan, of Sudan's bombing of the area. “If you want to wipe out a population, you do it very simply: You bomb the area where they grow food, you chase them off into the hills, they can’t grow any food, and they have no way to sustain themselves. You cut off all humanitarian aid, and the only thing left for them is starvation.”

More from GlobalPost: Sudan: George Clooney stands up for the Nuba Mountain people

The US government has reportedly discussed backing an operation to take aid across the border from South Sudan without the consent of the Khartoum government. As the crisis mounts, the Obama administration is under increasing pressure to act, said Washington’s special envoy to Sudan, Princeton Lyman, in January.

But many in the international community are reluctant to defy Khartoum, fearing it would set off a violent reaction from Bashir’s often belligerent regime. Bashir has already been indicted by the International Criminal Court for alleged atrocities against civilians Sudan’s western Darfur region.

“Sudan is a sovereign state,” said Valerie Amos, the UN’s emergency coordinator, on a recent visit to Juba, South Sudan. “They have made it clear that they will see any kind of cross-border operations as a hostile act.”

Sudan accuses South Sudan of arming the SPLM-N rebels, who fought alongside southerners during the 20-year civil war and who continue to wage a low-level insurgency against the Khartoum government.

“We already have a situation where there is a huge amount of tension, and a lack of confidence and lack of trust between the two countries,” Amos said. “I certainly would not like to see anything which would add to that.”

If aid cannot be trucked in to South Kordofan, then a deluge of hungry Sudanese refugees may pour into South Sudan, compounding an already massive food shortage there. The UN’s World Food Program predicts that already 4.7 million people in South Sudan will require food aid in 2012.

Amos pointed out that South Sudan lacks roads in many areas, and many of those that exist become impassable once the rainy season begins in April, making it harder to get food to refugees and other communities that are short of food.

“If we’re not able to pre-position supplies, we won’t be able to reach those people once the rains come and the situation could deteriorate significantly,” she said.

As governments and agencies discuss possible responses to the looming humanitarian crisis, young men in South Kordofan are joining the rebels in order to fight the Bashir regime, whose bombing has driven their families into refugee camps or mountain caves. The rebels say they have 34,000 soldiers already, with another 2,000 in basic training and 10,000 more waiting to join.

As fighting escalates, in which Sudan attacks rebels and bombs South Sudan, there is no easy solution to get food to the hungry people of South Kordofan.