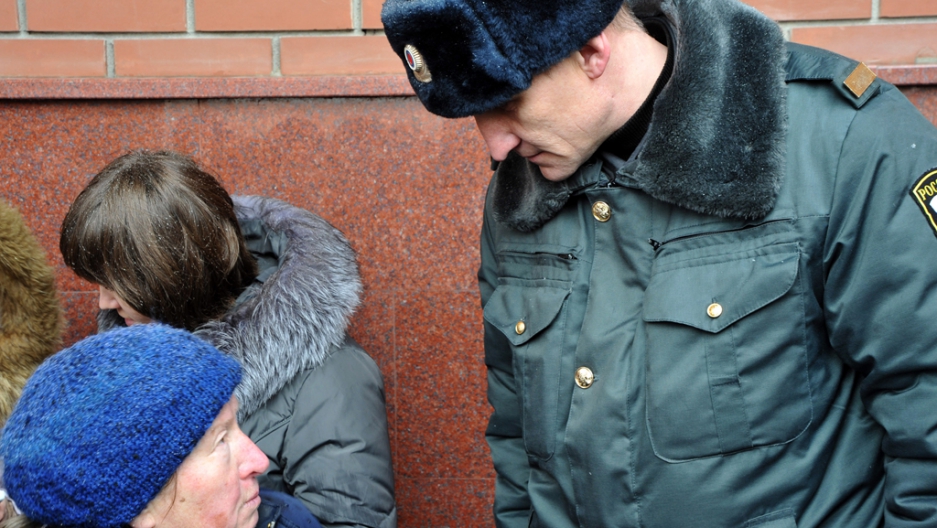 A police officers looks at a woman who calls herself a relative of police abuse sufferer outside the headquarters of the Investigative Committee's local department in Kazan, the capital of Tatarstan, on March 21, 2012, as she tries to lodge a complaint to investigators from Moscow. Russia's Investigative Committee is looking into local police violence in Tatarstan, a mostly Muslim region on the Volga River, after the shocking death of Sergei Nazarov, in Kazan on March 10 focused attention on brutal methods used on suspects. Officers of Kazan's police station allegedly raped 52-year-old Nazarov, a suspect in custody with a champagne bottle, leading to the man's death.
Credit: Alexander Alexandrov
Share

More Russian police officers have been charged with torturing detainees to death as public outrage over police brutality in the country grows.

The Associated Press reported that Russia's top investigative agency charged four officers in the Siberian city of Novokuznetsk in the death of a prisoner on Thursday. The Investigative Committee also brought new accusations against an officer in the city of Kazan, who is already in custody on charges of torturing another man to death, according to the AP.

Sergei Nazarov, 52, died in Kazan City Hospital on March 10, after having been apparently beaten and sodomized with a champagne bottle by police officers at Kazan’s Dalny police station, according to the Kazan Herald.

Nine police officers were fired after the incident, including the four accused of torture and the head of the police station, the Herald reported. Nazarov's death sparked protests in Kazan that attracted nationwide and federal attention, the AP reported.

The Russian and Tatarstan Ministries of Interior have both denounced the actions of the police force and launched an investigation into the procedures that allowed the abuse to occur, the Herald reported.

Police regulations in Russia require that officers report a certain quota of solved crimes, which encourages officers to make arbitrary arrests, the AP reported. Russian police often use torture as a means to extract false confessions from the people they round up, victims and human rights activists told the AP.

They said even President Dmitry Medvedev's police reforms have failed to stop or even contain police crimes.

More from GlobalPost: Obama asks Medvedev for "space" until after election, not realizing the exchange was caught on microphones