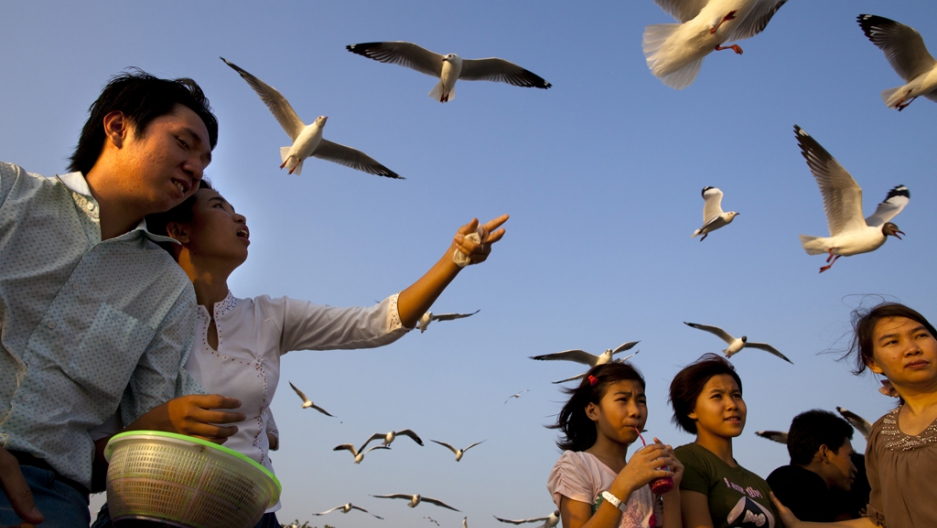 Burmese feed the seagulls at a jetty along the Yangon river ahead of the parliamentary elections on March 29, 2012, in Myanmar.
Credit: Paula Bronstein
Share

Whether you say "Myanmar" or "Burma" is a highly charged issue among many people — particularly Asia editors.

It's a question that has become code for: Whose side are you on? "Myanmar," for so long, suggested junta. And "Burma" meant you were against the repressive regime.

The reason for this line of thinking can be traced back to 1989, when the military junta officially changed the name from "Burma" to "Myanmar," which happened to be a year after it killed thousands who participated in a popular uprising. The miltary regime changed the name without consulting the people, and it became a symbol of oppression. Many rejected the shift on those grounds.

But as the Southeast Asian country continues to roll out reforms — giving amnesty to at least 200 political prisoners, agreeing to allow democracy icon Aung San Suu Kyi's National League for Democracy party to run in this weekend's by-elections — it's also a debate that is fading fast.

The two words do, after all, mean the same thing. They refer to an oblong country in Southeast Asia that is home to around 50 million people of various ethnic groups, the largest one of which is Burman. "Myanmar" is arguably more inclusive of the entire population, roughly one-third of which is an ethnicity other than Burman.

In the Burmese language, "Myanmar" is actually just a more formal, ceremonial version of the word "Burma."

More from GlobalPost: "Burma" or "Myanmar"? Does it Matter?

Now that the regime is — outwardly at least — reforming, its official name is becoming more internationally used and accepted. The US and the UK still use "Burma," but France and Japan have used "Myanmar" for some time. The BBC and the Washington Post are holdouts, but the NY Times and WSJ have switched. Here's the Financial Times' well-reasoned justification for making the change.

When you choose to call a country something other than its official name, you're making a statement.

So, somewhat counter-intuitively, it is GlobalPost's desire to not make a statement that has led us to change our style to "Myanmar."

It was never our intention in using "Burma" to suggest support for a specific political agenda. However, neither was it our intention to have "Myanmar" serve as endorsement of a repressive regime.

There is also the argument for simplicity. When the military regime made the change in 1989, they packaged it as a shift away from the country's colonial past. Most cities there do have a colonial name and a post-1989 name, the latter of which is used far more often. If you use "Burma," then you have to use "Rangoon" in order to be consistent, but most people say "Yangon."

Now that Myanmar is so often in the news, the spotlight is increasingly shifting to many smaller cities and towns and it just gets downright confusing.

The reforms in Myanmar need to stand the test of time. As GlobalPost's Patrick Winn wrote back in November in his "Burma Rebooted" series:

While Burma seems on the cusp of great change, there have been similar times of openness in its history that have failed to turn into lasting reform. Burma experienced a period of relative respite from repressive policies in the summer of 1988, which directly preceded its deadliest crackdown in recent history.

Regardless, GlobalPost will continue covering a country called Myanmar.