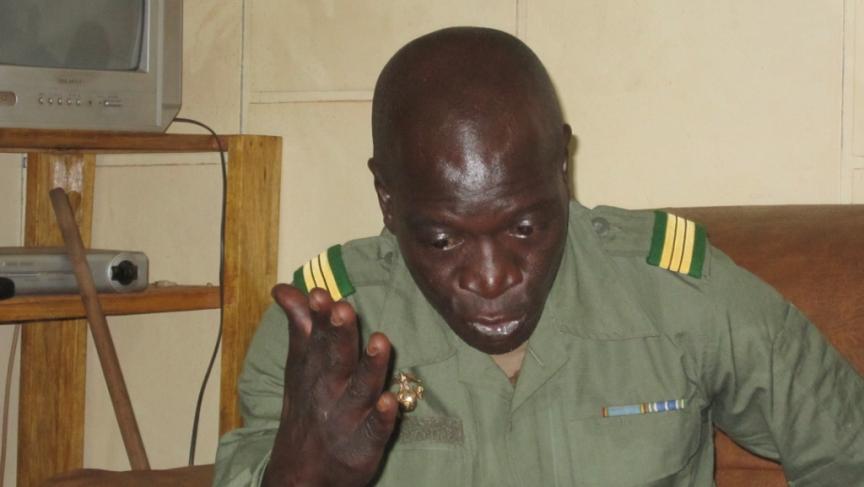 Captain Amadou Sanogo and his military coup unveil a new constitution and plans for an election as widespread condemnation of their coup spreads. (Photo by Martin Vogl via Wikimedia Commons.)

The leaders of a military coup in Mali have unveiled a new constitution, a week after seizing power.

They have also announced elections in which those who took part in the coup would be barred from standing, but have not set a date for them. The president of Mali, Amadou Toumani Touré, was ousted last week in a military coup that was led by soldiers unhappy with the previous government’s handling of a Tuareg insurgency in the north. Touré has gone into hiding, and his exact whereabouts are unknown.

Several thousand people rallied in the capital city of Bamako on Wednesday in support of the new military leaders.

But others aren't pleased with the coup. Mali’s West African neighbors joined by the United States are calling for an immediate restoration of democracy. The United Nations Security Council condemned Malian armed forces for the coup and called for the reinstatement of previously scheduled democratic elections in April.

Yeah Samake, a front-runner in that campaign, said he is unsure of the current state of the presidential elections and democracy in Mali.

"We can only hope that the presidential vote is still on. They talk about potentially holding elections soon, but a timeline has not been approved upon by the political leaders in the country. We are living the same uncertainty right now as the people outside of the country," he said.

Unlike those rallying in support of the coup on Wednesday, Samake disagree with the coup's leader, army Captain Amadou Sanogo, and his reasons for overthrowing President Touré.

"I would never bring myself to agree that coup d'etat is the way of solving our problems. Yes, Mali was in a difficult situation. Does that mean that we should encourage whenever we have difficulties, that a group of people take arms to solve the problem?" Samake said. "They are not doing any better than the people in the north, taking arms to make legitimate claims asking for improvement of the living conditions in the north."

The Associated Press reports that a delegation of West African leaders were set to visit Mali on Thursday, but were forced to turn back mid-flight after protesters opposing foreign interference briefly invaded the Bamako airport's main runway. Leaders from Ivory Coast, Benin, Liberia, Nigeria, Niger and Burkina Faso, representing the Economic Community of West African States (ECOWAS) were to meet with Sanogo to help restore the country's elected government. They are scheduled to meet in Ivory Coast instead, and an advisor to the president of Ivory Coast said they plan to impose sanctions immediately if Sanogo does not restore the constitutionaly elected government.

"The people in Mali are showing support for the coup, not because they are in favor of the coup, but because they are against the previous regime, the way they managed the whole rebellion, the way people are suffering in Mali, and the way leadership has failed the people of Mali," Samake said.

Samake said he briefly met with Sanogo and discussed the coup d'etat and Sanogo's vision.

"I came to a clear understanding at that point that this was not thought through and they did not have a clear plan. So, it was accidental, in my understanding, a mutiny, and it ended up being a way for them to take over the power," he said.

He also said he meets daily with five or six other presidential candidates, and has formed an alliance with them called l'Alliance pour la démocratie, le progrès et la solidarité, or the Alliance for Democracy, Progress, and Solidarity (ADPS).

"The military leaders now have no choice than working with the people to transfer power so that democracy can continue to flourish. We cannot live under dictatorship anymore. The power needs to be given to a transitional government that needs to work for, at the most, nine months making sure that we can hold fair and transparent elections," Samake said.