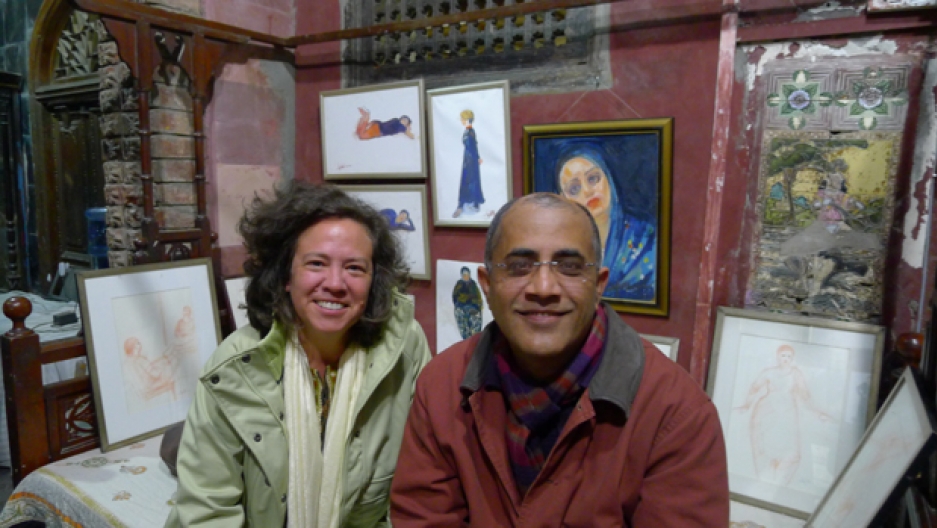 Gwen Williams and Tahir Sandhu are hoping to import Pakistani mangoes for sale in the US. (Photo: Odette Yousef)

Share
The first time Gwen Williams ever tried a mango was six years ago. Her husband, Tahir Sandhu, bought them at a grocery store in Bloomington-Normal, Illinois, where they were living at the time. "He said 'Oh, these are very good mangoes.' I didn't know how to eat it, I didn't really even know what it was." They were really soft and ripe "And he was like, 'Roll it around,' and I'm like, 'OK.' " So she's rolling this mango between her two hands, "And he says 'OK, now eat it.' And I'm like, 'Well it's not even sliced open.' And he said, 'This is how mothers used to feed mangoes to their children in Pakistan.' He says, 'You'll stay busy for quite a while.' " Tahir, who grew up in Pakistan, showed Gwen how to eat it. He cut a tiny slit at the top of the mango. "It felt like holding a really thick milkshake. You just slurp it out of the little slit. It was wonderful!" Gwen said. In Pakistan, mangoes are called the King of Fruit. Pakistani mangoes are less fibrous and much sweeter than the Mexican mangoes that you can buy here in the U.S. I met Gwen and Tahir in Lahore, Pakistan, this past winter, where they went to start a new chapter in their lives. They want to start importing Pakistani mangoes to the US. Tahir said they got the idea from Hillary Clinton. "Mrs. Clinton was in the media telling everybody that we are going to get Pakistani mangoes here," he said. That was in the summer of 2010, when Secretary of State Clinton was visiting Islamabad. At that point, you couldn't buy Pakistani mangoes in the US. USDA rules made it difficult to bring in Pakistani fruit. But once top officials in both countries started pushing for a mango trade deal, after years of negotiations, things began to move. Gwen read about it in the newspaper, Tahir said. "She read that, and she said 'Look at this, what is going on?' I said 'Yeah, Pakistani mango is the best mango, so what? It should be here, why not?' " So Gwen and Tahir quit their jobs as research librarians to get into the mango trade. Shah Mehmood Qureshi was Pakistan's foreign minister at the time that Clinton endorsed the trade. He said the mango deal isn't just about moving fruit; it's about moving perceptions. "Mango diplomacy could have led to a better understanding between the two people." That's right – "mango diplomacy." The idea is to help both countries see that their ties can go beyond just fighting terrorism together. They can promote each other's economic interests through trade, and in the process, perhaps, repair fraying relations between the U.S. and Pakistan. Wins all around, right? Not according to businessman Abid Butt in New York. "The total cost of this venture exceeded $70,000 to me," Butt said. He was the first to import Pakistani mangoes for sale once the trade deal was finalized last summer. "I am still in debt, paying my bills." Butt imported almost 3 tons of mangoes. He said it was a red-tape nightmare from the start. First it was hard persuade Pakistani mango growers to sell to him. When Butt finally got one orchard to supply him, it charged him triple what it charges the local market. Then there was the high cost of flying the fruit to Chicago and then ground shipment to New York. "The first day of arrival we sold about six boxes for $100 a box, in order to cover whatever we could cover." One box holds about six mangoes, so that was about $16 per mango. "Then we reduced it to $70, then to $50, then to last day $30," Butt said. He finally had to throw away about 40 percent of the mangoes he brought in. He said the sweet words of diplomacy and a sweet fruit weren't enough. When it came to the nuts and bolts of getting the mangoes here, this deal left him bitter. He won't do it again. And his advice to Gwen and Tahir? Do your research. That's exactly what the two former librarians are doing in Pakistan. Tahir said he thinks Americans will like the fruit if they get a chance to try it. Maybe, he said, they'll adopt the Pakistani tradition of mango parties. "You put them in an ice box, and then you just talk, or watch a cricket game, and then you just eat mangoes." Well, maybe watch football instead of cricket.