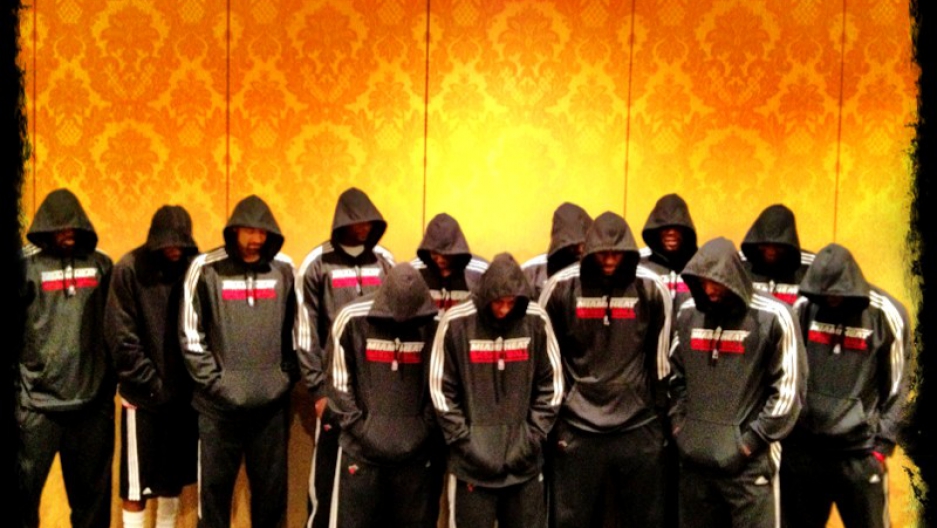 Members of the Miami Heat express solidarity with Trayvon Martin by wearing hoodies during a recent road trip. (Photo courtesy of LeBron James, via Twitter.)

The death of Trayvon Martin has made a symbol of a simple piece of clothing — the hooded sweatshirt.

Martin was wearing a hoodie when he was shot and killed by George Zimmerman last month in Sanford, Fla. In his 911 call, Zimmerman described the teenager’s hoodie and told police he looked suspicious.

Since then, thousands of people have donned hoodies in protest.

Illinois Democratic Rep. Bobby Rush was reprimanded yesterday for wearing a hoodie during a speech in the House to protest the shooting death of Martin.

“Just because someone wears a hoodie doesn’t make him a hoodlum,” he said.

There was also a “Million Hoodie March” in New York last week. And over the weekend, church-goers across the country wore hoodies to worship. Then there’s the photo of 13 members of the NBA’s Miami Heat wearing black hoodies with their heads bowed.

Mark Feeney, The Boston Globe’s Pulitzer prize-winning photography critic, saw the photo and wrote about in his weekly column this week. He said the Heat photo is simple, reserved and eloquent and addresses not the law and the controversy surrounding Martin's killing, but the notion of morality and the sense of grief felt by the many Americans.

"It's really an extraordinary image both in its simplicity and its resonance," he said. You have 13 guys and they're all wearing Miami Heat warm-up sweatshirts, with hoods. And the hoods are over their heads. Those heads are bowed, the eyes are averted, they all have their hands in their pockets. It's as if they're in mourning."

He said the photo is so powerful in part because it forces you to think about what you're seeing — and you have to seek it out. LeBron James posted it on his Facebook page, but otherwise it wasn't pushed out to people, unlike Geraldo Rivera's comments about how the hoodie was to blame for Martin's death.

"This image is so still," Feeney said.

Feeney noted there has been an association between the word “hood” and crime that goes back to medieval times, for instance with Robin Hood.

“Robin Hood robbed from the rich to give to the poor, but it was still robbery,” he said. “Hoods conceal or obscure. They can disguise or seem menacing. Such terms as ‘hoodlum’ and ‘hood’ bespeak this tradition.”

Feeney pointed out that monks too have worn the hood, giving a slightly different perspective on what the hood means as a symbol. Though even in that case the hood represented difference, and separation.

"It's a way of setting oneself away from the world and being with one's own thoughts," he said.